LINCOLN–Sitting in a packed hearing room, Frank LaMere holds his face in his hands, weeping with joy and relief.

Earlier on this late-April morning, the long-time Whiteclay activist had “put tobacco down,” praying to the Creator, asking, if He could change Whiteclay, let it change today.

And finally, after more than a century of alcohol sales from Whiteclay to the nearby Pine Ridge Reservation, after almost 20 years devoted to closing the town’s four beer stores, LaMere’s prayers were answered. 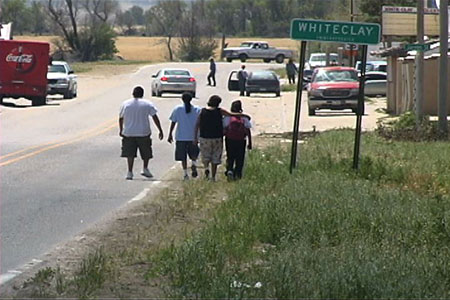 On this day, on Pine Ridge, a reservation the size of Delaware and Rhode Island combined, the 40,000 residents can talk of nothing but this historic decision.

Since 1904, they have lived alongside the saloon town, which has poured millions of gallons of beer across the Nebraska-South Dakota border onto the dry reservation.

In the late 1990s, after decades of suffering the ravages of alcoholism, two unsolved murders in Whiteclay galvanized Indian activists against the beer sales. Steadily mounting pressure forced the liquor commission to monitor the four beer stores and the area’s questionable law enforcement.

Guy Dull Knife Sr., 69, a lifelong Pine Ridge resident, has been instrumental in Whiteclay protests. Once, he and members of his family set up a roadblock on Highway 87, and in half a day confiscated and emptied 80 cases of beer from cars leaving the village of seven people.

“[This] will save a lot of people…lot of kids that are suffering,”Dull Knife said of Wednesday’s decision.

While celebrating the commission’s decision, many Pine Ridge residents and long-time beer store opponents are shifting their focus to the future.

“It’s a small victory, but it’s nowhere near what our nation needs,”said Olowan Martinez, Whiteclay activist from Pine Ridge and member of the Oglala Sioux tribe. “This is just a small step in ending the liquid genocide, so we’re happy, and surprised, but it ain’t over yet.”

Nora Boesem is a Whiteclay activist and foster mother to nine Pine Ridge children who suffer from fetal alcohol spectrum disorder. She said she was on the phone just hours after the liquor commission decision discussing funding for establishing detox and treatment centers on the reservation and surrounding areas.

Meanwhile, former Oglala Sioux President Bryan Brewer said the issues on the reservation – physical and sexual abuse, suicides, murders, extreme poverty – did not begin and will not end in Whiteclay.

But 3 million fewer cans of beer coming onto the reservation, he said, is a start.

“Since [the stores are] gonna be closed, [the tribe] will have an opportunity to do some things that they’ve never done before, and that is to actually get our healing processes started,”Brewer said. “The battle’s not over yet, but we sure won this fight.”

Abram Neumann, a Whiteclay street missionary, testified at an April 6 commission hearing. He said being unable to take a short walk from Pine Ridge to Whiteclay for a drink helps open the door for recovery from crippling addiction.

“I was talking to one [street person] this afternoon who said this [liquor commission decision] was gonna be a push that would help him quit, and he was excited for it,”Neumann said. “I think it will be a push for a lot of people to get off the streets.”

Boesem has alternated between crying and laughing in surprise since she heard of the decision.

Surprise because activists have testified before the liquor commission for years, but no changes were made. Now, she says, the unanimous vote revoking the beer licenses paves the way for other reservation changes to be made.

“Today is an emotional day…and I’m gonna let it be an emotional day,” Boesem said. “But tomorrow is where do we go from here, hit the ground running. This is the first step in a long line.”

Editor’s Note: Lauren Brown-Hulme is a member of a UNL depth reporting class that has been covering Whiteclay since last fall.