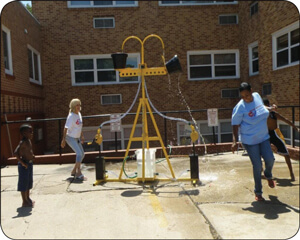 Three Doctors’ to help energize organization trying to keep people out of ‘underground economy’ by Laura Schreier It wouldn’t seem like the Eastern Nebraska Community Action Partnership has much to cheer about. ENCAP board president Ernest White talks about new faces showing up for help at the program’s food pantry, or for utility assistance, or for job training programs, whether or not the recession is technically over. “Jobs don’t just reappear,” he says. While ENCAP has continued to help low-income people in Douglas and Sarpy counties, the program has been crunched by those bumped out of the middle class – SUV-driving, Blackberry-owning people who lost their jobs and now find themselves in the food pantry lines. About 6,400 people used ENCAP’s services last year, compared to 6,080 the year before, according to the nonprofit. But ENCAP intends to celebrate Oct. 15, marking its 45th anniversary at a fundraising event in downtown Omaha’s Embassy Suites. The organization will highlight its successes and listen to a trio of speakers who are a prime example of victory over poverty. The keynote speakers are the “Three Doctors,” friends from Newark, N.J., who grew up poor in public housing, but made a pact to graduate college and become doctors. Three respective medical degrees later, they wrote several books about their experience, were the featured in a 2006 documentary, and now give motivational speeches around the country. They’re coming to reinvigorate the crowd, White says. It’s hard not to get caught up in the struggles and obstacles low-income communities face, but these three are an example of the possibilities that exist for everyone, despite huge disadvantages. ENCAP is building a bit of a track record for bringing celebrities to call attention to its causes — actress Vivica Fox (Independence Day, Kill Bill) dropped by in October 2009 to share a motivational message at Omaha North High School, and Greg Mathis of TV’s “Judge Mathis” was a guest at ENCAP’s last event five years ago. Executive Director Rev. Dwight Ford says the organization hunted for speakers for a full year before settling on the Three Doctors, considering celebrities such as comedians Steve Harvey and Chris Rock. But the three doctors came from the same background as many of ENCAP’s current clientele, and their message is meant to uplift the organization and keep it focused on the future. Of course, the event is also a fundraiser for ENCAP’s programs. Barbara Johnson, director of development, says the partnership aims to put 90 cents of every event-raised dollar straight to the nonprofit’s programs. The event is a relatively rare thing for ENCAP, and will help the nonprofit bring in different types of revenue. ENCAP is, at the moment, heavily dependent on government grants and has relatively few direct donations to keep it afloat. ENCAP’s IRS forms for 2008, for example, show it got $1.4 million in government support, but about $5,600 in donations. Prior filings show that contributions were even smaller in years past. The event is a relatively rare thing for ENCAP. Johnson says the first and only other such celebration was at the organization’s 40th anniversary. Swank parties aside, ENCAP is busy with a myriad of programs to “eliminate the causes of poverty,” as White emphasizes. In other words, ENCAP isn’t just about keeping people fed. The project has emergency services for people struggling to pay bills or put food on the table, he says. But it also provides counseling for families dealing with anger management or other issues, Omaha Public Schools students who’ve been suspended for drug and alcohol violations, as well as services for senior citizens. Convicts newly released from local correctional facilities can sit down for both emotional and jobs-training counseling. White says former inmates, often incarcerated for drug-related crimes, need help coming to terms with their past lives, as well as the tools to get back on their feet financially without falling back into the “underground economy” that contributed to many of their problems. That temptation can be particularly strong when legitimate jobs are scarce. And one particularly unusual program will also get a nod at the event: four teenagers who, thanks to money donated through ENCAP, got flying time and pilot instructions through local company Flight! Nebraska Group. That’s a big push toward getting them their pilots’ licenses, and it’s a great image to highlight at the celebration, White says – they’re getting “above it all.” Like the Three Doctors, the students in that program tout a message of potential to disadvantaged young people. “Low-income does not mean low intelligence,” White says. CNN news anchor Tony Harris hosts ENCAP’s 45th Anniversary celebration Friday, Oct. 15 at Embassy Suites, 555 S. 10th St. For tickets, call 402.453.5656 x200. Or visit encapomaha.org.