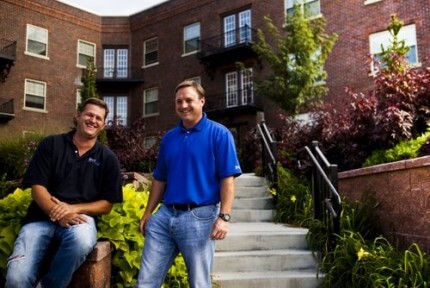 “The location in Midtown wasn’t a problem as far as getting renters to move inwards,” said Scott Semrad, part owner of midtown-based Urban Village. “We had the product, but it was trying to push the location of that product that was the problem.”

It was a gorgeous day at Delice in Midtown Crossing. The hustle of the area was exciting; young professionals grabbing lunch, ladies enjoying their coffees and magazines, all with the impressive Mutual of Omaha development in the background. Midtown Omaha is turning into the great place to work and play. Thanks to the dedication of developer and rental company Urban Village, more people are finding midtown to be the perfect place to live as well.

Semrad and Jerry Reimer met through chance in 2008. “I saw this area on St. Mary’s and took it to a friend of mine who was a real estate agent,” said Semrad. “I wanted to see if it was a worthwhile investment, and, if it was fixed, would anyone want to live in it. That’s when he introduced me to Jerry.” The deal never materialized, but the partnership with Jerry created a business that came to successful fruition: Urban Village.

“I came from Denver working in neighborhoods,” said Semrad. “I actually lived in an area that reminded me quite a bit of midtown Omaha with lots of character. I had no experience with apartments, which is where Jerry came in.”

Reimer shook his head and tapped his pen against the table. “I actually was against working in midtown,” he said quietly. “We had done a project out west and I was planning on staying out there, but Scott said midtown would be a better area. I guess he was right!”

Urban Village is unique in that it only invests and rents in properties that are within a six-block radius from Midtown Crossing. Instead of managing one huge apartment complex, Reimer and Semrad invest in smaller properties within an area, and run them as one complex. “This makes it easier for us and our maintenance guy,” said Reimer. “This way we can address issues and problems in a more efficient manner.” The risk with owning a number of smaller properties instead of one large complex is lower as well. “If you have an incidence at a bigger building, it can really damage you,” said Reimer. “Since we spread our apartments out a bit, if there are any issues they are not as serious. We really have never had any major problems.”

Midtown Omaha has characteristics that make it a great investment for property owners, and Semrad realized immediately the value of the location. “I saw it as a great area, with three Fortune 500 companies, educational institutions and downtown in walking or biking distance.” With the multi-million dollar Midtown Crossing development, renters are noticing an improvement in the area that is attracting young professionals at a shocking rate. While improvements were being made, Semrad still noticed a void in the general midtown area. “Omaha was missing that walkable, medium density neighborhood,” he said. “It still seemed right, but we weren’t sure of what was going to come of the investment.”

Reimer shook his head. “There were a lot of sleepless nights, but luckily we kept going.”

By combining the practicality and appeal of stainless steel furnishings, hardwood floors, and oil-rubbed cabinet handles, Urban Village is seeing a new migration of renters from west Omaha to Midtown. In a rush of moving trucks, a wave of young professionals ready to be immersed in a truly diverse experience, and stepping away from sparse, suburban areas.

“So what was your inspiration to work in real estate?” I asked, before a breeze nearly took away my notebook.

“I didn’t have that epiphany about working in development,” said Semrad. “I just happened into real estate. Living in Denver, I always enjoyed urban living and being in a diverse community.”

After earning his MBA in Boulder, Semrad took on an internship that would alter the course of his career. “I worked on a market study with Black Castle Capital,” he said, tipping back in his chair. “I was also taking real estate classes and working at the same time. My wife is from Lincoln, so we moved and I was looking for consulting work in Omaha. Apartments seemed to make the most sense.”

Young professionals seem to make up the bulk of new renters in the midtown area, mixing well with established working class and ethnically diverse residents, with women being the new primary leaseholders. “We don’t have a single one bedroom available,” said Reimer. “Young, educated single women are moving from west Omaha and into our properties. Young women seem to be the most adventurous. It’s safe here and a great place to live. And women see that.”

Urban Village currently manages 15 properties with 220 modern apartments, complete with amenities that have led to a new project. Eight new buildings with 137 apartments are underway in the Park Avenue neighborhood, a thriving and diverse community.

One of Reimer’s earliest memories of apartment management was when he was eight years old. “My parents owned an apartment building,” he said. “We mowed lawns, painted and really got involved in the property. I learned the business end of management from my parents. It seemed like a better option than drywall.”

Several years pass, along with them expat jobs, college, and then next thing Reimer knew he was designing apartments in Tokyo. “I was a migrant worker,” he laughed. “I was on scholarship from the Ministry of Education. I was a financial analyst for about four years in Japan. I also worked in Atlanta, Dallas, Phoenix and finally Omaha.”

We all paused to glance at a woman walking by on her phone as she balanced her lunch from Catina Laredo.

“I really have never wanted to work with anything besides apartments,” said Reimer, laughing. “I’m a change agent who hates change!”