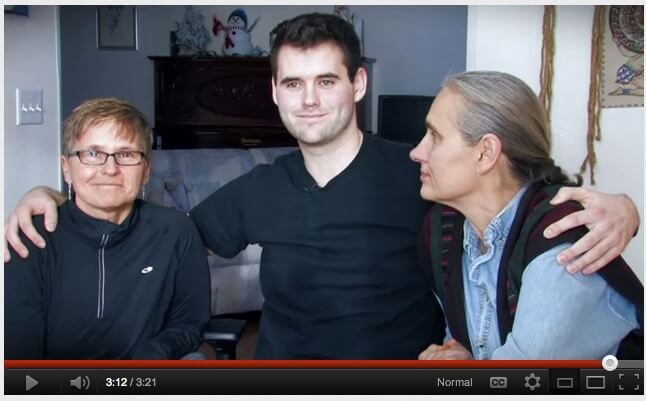 With gay marriage being assailed during an Iowa House Judiciary Committee public hearing in 2011 Zach Wahls offered counter testimony that not only charged the proceedings but the national dialogue about the issue.

Raised by same sex partners, Wahls made the case that sexual preference has nothing to do with effective parenting. He used himself as a case in point. The 21-year-old University of Iowa student and Eagle Scout, who happens to be straight, owns and operates his own tutoring business, Iowa City Learns, that hires local high school students to tutor peer students.

What Wahls spoke that afternoon became a YouTube sensation and ever since he’s emerged as a leading LGBT advocate.

His 2012 book, My Two Moms: Lessons of Love, Strength and What Makes a Family, distills his thoughts and experiences as the son of a lesbian couple. The book’s message picks up where his testimony ended, when he said “the sexual orientation of my parents has had zero impact on the content of my character,” and frames his frequent public talks. He’s the featured speaker for the March 12 Shirley and Leonard Goldstein Lecture on Human Rights at the Thompson Alumni Center at the University of Nebraska at Omaha. His 7 p.m. address is free and open to the public.

Wahls will emphasize what unites people, not divides them.

“I obviously grew up in a family that is in some ways very different from the median American family,” he says, “but at the end of the day I think there’s much more that makes us similar to most other American families than makes us different. So my remarks are really going to be focused on trying to find this common ground.”

The 2011 plea he made before Iowa legislators did not stop the Republican-controlled Iowa House from passing the same sex ban, which the Democrat-majority Senate has thus far blocked. But the argument he made for gay marriage and parenting resonated far beyond the confines of that state debate.

“My family really isn’t so different from any other Iowa family,” he told lawmakers. “When I’m home, we go to church together. We eat dinner, we go on vacations. But we have our hard times too. But we’re Iowans. We don’t expect anyone to solve our problems for us. We’ll fight our own battles. We just hope for equal and fair treatment…

“So what you’re voting for here is not to change us. It’s not to change our families, it’s to change how the law views us, how the law treats us. You are telling Iowans, ‘Some among you are second-class citizens who do not have the right to marry the person you love.’ I’m sure we’re going to hear a lot of testimony about how damaging having gay parents is on kids. But not once have I ever been confronted by an individual who realized independently that I was raised by a gay couple.”

His remarks went viral online overnight. Life hasn’t been the same since. He’s given national media interviews and appeared on The Daily Show and the Ellen DeGeneres Show.

“It’s an interesting place to find one’s self, no doubt about it, especially at such a young age,” he says of the notoriety. “The thing a lot of folks don’t necessarily  understand is that when you are the son of a same sex couple, especially in a place like Iowa or Wisconsin, where I was born, you are already an ambassador  simply because there aren’t a whole lot of us. And so growing up I was really the only kid that a lot of folks knew who had gay parents and that put a certain amount of pressure on me when I was younger.”

Active in the Scouts for Equality campaign to end the ban on gays in the Boy Scouts, he’s hopeful a policy change is near. He says the organization is listening to the Scout community and trying to formulate equality language to be voted on May 24 at the meeting of its national council.

He’s embraced the activist role that’s come his way and is encouraged by the support he’s encountered in his many travels.

“Over the last two years now I’ve had this incredible opportunity to go all over the country and have a conversation with people who are similar to me, who are different from me about this question and this debate the nation is currently having about marriage and family and tried to make some sense of it.

“My message really resonates with people both on the left and the right politically. In my generation I’ve found there are increasingly very few people who view this as a partisan issue and it think that is a very good thing. As I’ve had the chance to speak with young conservatives and liberals and libertarians I’ve found there’s interest in coming together to find solutions and a desire for collaboration and problem solving and less interest in fighting this culture war that’s dominated American politics.”

He says his advocacy role “has absolutely changed me,” adding, “When my generation was growing up we were always told by our guidance counselors that we could change the world. I think a lot of us thought it was b.s.. We didn’t necessarily think it was true and this showed me that well, actually, it is true. There is nothing more powerful than an idea thats time has come.”

Several times now, he says, people have told him his words have helped change their minds about gay marriage and parenting and he calls this feedback “a very powerful reminder of the ability we all have to impact other people’s lives and to expose them to different ideas and new points of view.”