Hundreds packed into The Grass Wagon in Council Bluffs July 17 to see former vice president and current 2020 presidential candidate Joe Biden. Parking quickly filled up, and the surrounding streets were lined with cars, prompting some people to park in the grass to avoid walking several blocks in the afternoon heat.

Inside the event, people stood shoulder to shoulder waiting for Biden to speak. Event staff found another use for their clipboards, besides collecting email addresses of attendees, and turned them into trays to carry water to those recovering from the heat after waiting in line.

The large crowd matched Biden’s front-runner status. The most recent NBC and Wall Street Journal poll shows Biden with 26% of the vote, seven points ahead of Sen. Elizabeth Warren and double the support of Sens. Bernie Sanders and Kamala Harris, who are tied for third place with 13%.

Biden’s campaign has faced criticism, especially about his age and what some view as outdated beliefs. At 76, Biden is a year shy of being four decades older than the youngest 2020 hopeful, Pete Buttigieg. Polls show Biden is doing best with older Democrats, while Sen. Warren is strongest among voters ages 18-49.  While he has never lost hold of his lead, Biden has a fight ahead of him to convince Americans that returning to what worked in the past is the best plan to move the country forward.

Although his opponents have made Biden a target, he began his speech by making it clear he would fight to see any one of them elected. “Whether or not I am the nominee,” he said, “I promise you I am going to work like the devil to make sure a Democrat is elected president of the United States.”

Standing on a stage with large banners, stage lights and supporters surrounding him, Biden explained why another term under President Trump is dangerous. He said defeating him was his primary motivation to run. “We can overcome four years of Donald Trump,” he said. “But if we give him eight in the White House, we will forever and fundamentally change the character of this nation.”

Biden said his second motivation to join the fight for the presidency is to help the middle class. He reminded the crowd of his track record supporting working Americans, but he also addressed the new challenges of the middle class.

“The majority of middle-class Americans don’t believe their children will have the same benefits and lifestyle they had,” he said, “That’s the first time that’s happened in the lifetime of any one of you.”

Biden is generally viewed as the primary’s moderate pick. For example, while Sens. Warren and Sanders have both proposed Medicare for All plans that would abolish private insurance and create a new public option, Biden plans to take more incremental steps to address health care challenges by building on the Affordable Care Act, which he helped create as vice president.

“The Affordable Care Act was a gigantic step forward in this country,” he said. “We made historic progress in extending health care to 21 million Americans who didn’t have it before.”

Biden said he had just rolled out the details of exactly how he plans to build on Obamacare, but joked that he wouldn’t get too technical because the crowd was standing. “I want to encourage all of you to go online and read the whole thing,” he said, “which I’m not sure I’d do if I were you either.”

On education, Biden again leaned on his vice presidential credentials. He explained that a report he helped create under President Obama predicted that 65 out of every 100 jobs today requires more than a high school diploma. Biden plans to address this challenge by making technical and community college free.

Explaining why providing affordable education is so important, he said, “My wife, who still teaches at community college, says it best: Any country that out-educates us is going to out-compete us.”

Biden ended his brief speech explaining the third reason he started his campaign: unifying the country. “The only way we are going to get anything done in this country is by working together,” he said.

Biden received roaring applause for calling Trump “the president for his base” and pledging to be president “for all Americans.” The applause continued and grew as Biden ended his speech, yelling above the noise, “We all know who Donald Trump is. We got to let him know who we are. We choose love over fear, unity over division, truth over lies, and science over fiction.”

Biden did not take any audience questions, but he did leave plenty of time to meet and chat with those willing to wait for him to make his way through the crowd. At the end of every exchange, Biden offered up his arm to hold phones at an angle over his head, proving that he is not too old to know how to take a good selfie. 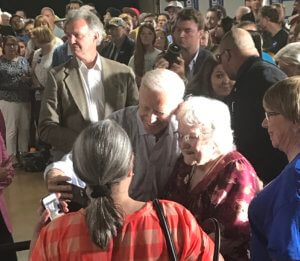 Biden did not reveal any new ideas in his speech, but he was able to get a crowd of hundreds of Iowa voters cheering without them.