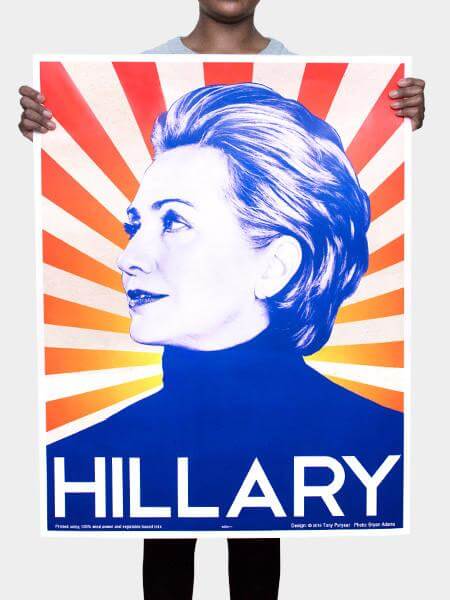 One thing that’s amazed this cycle is the passion directed at our first serious woman presidential candidate. And it’s not enthusiasm. Seems the word hate is tossed around quite a bit by normally friendly folk.

It’s fairly easy to understand dislike, distrust or a whole range of emotions that are not positive, but also not so absolutely damning. Even longtime Democrats have expressed concerns about trust or truthfulness, struggling to find the enthusiasm for a record-breaking run by “the most qualified candidate ever,” according to a very popular president that broke the highest racial barrier.

Why are folks hating on Hillary? One key theme seems to play out across personal anecdotes and media coverage — the steady drumbeat of scandal. Lost in that noise is an exhaustive and transparent record, built on creating opportunity for more Americans with the most public, detailed and acclaimed plan for progress.

But it starts with us, and it’s compounded by our media. Feeding the narrative are the two opposing themes from this election – fear and awfulness (thus, let’s Make America Great Again) versus hope and continuity (Stronger Together).

Sitting at the heart of that is a candidate with a level of discourse that has reached new levels of low not seen in the modern era (but also not exactly new if you look back far enough when racism, sexism and bullying were standard fare). As trolls poison the public discourse online, we retreat into our bubbles. We don’t often discuss the presidential election as friends and family, we talk past each other.

“To know what Trump means, despite the words that he is saying, you have to understand — or think you understand — the message before he opens his mouth,” writes Heller. “That way of interpreting language is unassailable because it allows no persuasion, only self-revelation: the words don’t convey information but, like candles and jasmine perfume, serve as aesthetic trappings, prompts that may lead listeners to locate certain passionate moods in themselves.”

If Donald supporters believe he’s the change agent, it’s because they really want to turn things back to a better time for them. So how does Hillary break through?

Sadly, it’s not likely she can. It’s stacked against her. When Barack Obama ran on “Yes We Can,” it was really about him and the change he represented. “Yes we have to” defines this cycle and it sits on us. We are the breakthrough and it’s going to take effort.

Searching for Scandal and the Steady Drip of Public Service

Four years of Benghazi headlines are followed by email server headlines. Can this woman ever stay out of trouble, you have to wonder?

Probably not. The narrative is set. A life of public service means there’s never-ending fodder for speculation.

As an exhaustive study of this cycle’s election coverage by Harvard University’s Shorestein Center notes, Hillary received “negative” coverage by a margin of almost 3-to-1 leading up to the start of the primaries, coinciding with the rise in negative perceptions of her. Meanwhile Donald received fairly neutral coverage worth $2 billion without a constituency or plan, but a golden escalator and blatant racist appeals. With the start of the primaries, this inequality also reached Bernie (though he received the highest proportion of positive coverage overall).

“The media’s obsession with Trump during the primaries meant that the Republican race was afforded far more coverage than the Democratic race, even though it lasted five weeks longer,” the study report. “The Republican contest got 63 percent of the total coverage between January 1 and June 7, compared with the Democrats’ 37 percent — a margin of more than three to two.”

While Politico’s Jack Shafer correctly notes that news is never fair, and Obama enjoyed that same advantage over McCain, what’s even worse is the shallowness of the coverage. Across both races, 89% of the coverage focused on the “game” of politics – polling, fundraising, strategic maneuvering — and its mechanics — timetables, upcoming debates, appearances — leaving just 11% for such substantive issues as candidate histories, policy positions or background on the issues.

In an extremely fractured media universe with a long list of choices, it’s not surprising that overworked journalists have to chase thinner content to get the eyeballs and clicks that drive revenues. Talking about Donald’s candidacy, CBS CEO Les Moonvees told a tech conference in February that “It may not be good for America, but it’s damn good for CBS.” Real, public service journalism takes resources and courage.

If Donald can exceed the lowest expectations, Hillary is always catching up to them. If Donald’s hidden tax returns, lack of policy specifics and “word salad” stumpifying make reporting difficult and the unacceptable okay, a House of Representatives controlled by Republicans can insure a never-ending stream of investigations with a deep trove of public records built up over Hillary’s 30 years of public service.

Beyond that steady drumbeat of headlines are some hard facts.

Benghazi: After one of the longest and most expensive Congressional investigations in history, there has been no evidence of a stand-down order, an intelligence failure or any administrative wrongdoing, by Congressional Republicans’ own admissions. Don’t read interpretations of the 13 Congressional reports issued on this, read the reports themselves. That story had pretty much played itself out when the next one started.

Emails: Just like former Secretary of State Colin Powell, Hillary used a private email account. Out of approximately 60,000 emails over four years, half were destroyed as “personal” and the other half turned over to Congressional Republicans.  Any emails sent to government employees leave a public record. Personal emails, like private letters, have never been open to public record. Out of the 30,000 emails made public, 113 contained classified information, or roughly 0.3 percent. Much has been made of Hillary’s claim that nothing was classified, which technically covers 99.7% of her emails. How’s anyone going to remember those few slips, three years after the fact, of which only three were deemed marked classified at the time?

And let’s get some context here. Compared to Colin Powell’s admission he mislead the United Nations about Iraq based on false information from the Bush administration that has cost us over $2 trillion and counting, 4,491 U.S. soldiers killed and tens of thousands injured, not to mention hundreds of thousands of Iraqis killed and a Middle East in an unprecedented mess, are we really even talking about Clinton’s emails like it’s high treason?

Given 30 years of vicious, partisan attacks against her that frequently crosses on fantastical, would anyone second-guess destroying personal correspondence?

So ask your friends and family if they’re ready to vote for Trump because of hate. Hate for someone who’s had one of the most transparent yet opposition-attacked careers in public service (39 years of tax returns?!) and is our first major party female candidate.

You can hate where the world is heading, but you’re crazy if you think Trump’s “winning temperament” is going to be able to do anything with a board of 435 Representatives and 100 Senators, particularly with his own party divided.

The real test falls to the rest of us. If we don’t find the enthusiasm to motivate everyone we know to stand up to fear and bigotry, we will deserve the dark days ahead. Fortunately, Hillary has a proven record of bipartisan and popular success once in office, both as a U.S. Senator and Secretary of State.

We just have to get her there.