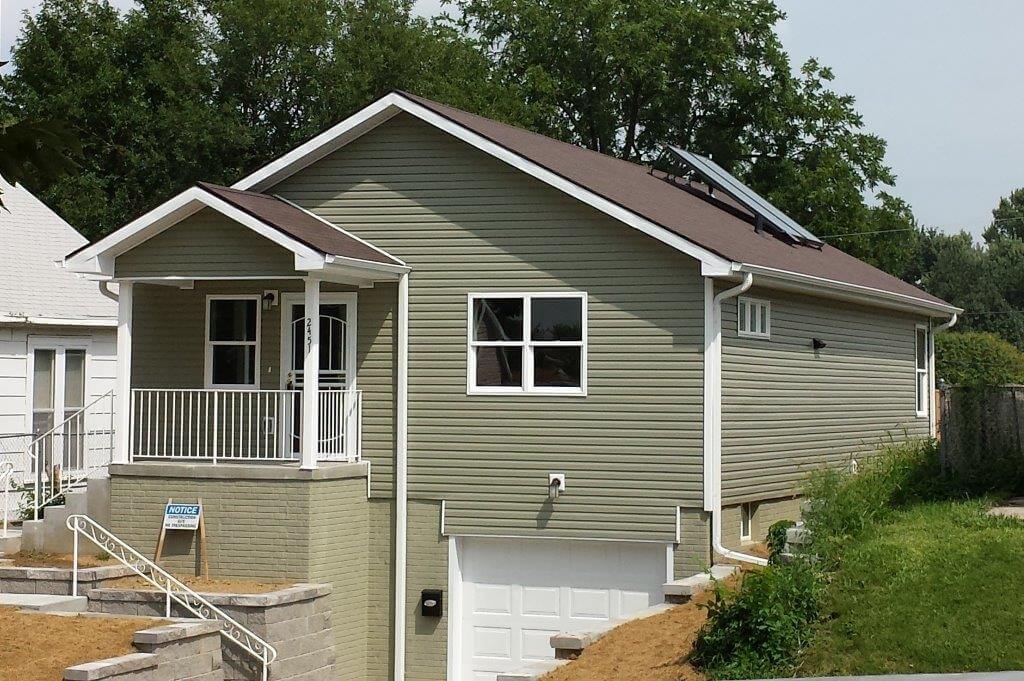 Thinking about installing solar panels on your home? There are some key questions you need to ask yourself first including: What is the current cost of your electric bill? How much electricity are you using on a daily basis? How much solar energy do you need to generate to offset that usage?

The number and placement of solar panels on your home will depend on the size of your house, the kind of surface area you have to work with as well as things like how many trees you have in your neighborhood.

The primary question installation experts are going to ask, “What is your goal?”

David Holtzclaw, President of Transduction Technologies, said most people are looking for some reduction in their electric bill. He said many times they have had an interest in renewable energy for awhile but now the rebates that are in effect as well as the prices for installation sound good, so they take the leap and have a solar system installed in their home.

In April, Denise, a homeowner in Ashland, had a 10.6-kilowatt system installed on her home. At the last Nebraskans for Solar meeting, she shared that she and her husband have been net zero since they turned their system on, meaning they produce all the electricity they need with their solar system.

“The most rewarding thing for me is watching online and seeing how much of my carbon footprint I am offsetting with solar,” she said.

Denise and her husband took an IRA that wasn’t performing and invested the money in “themselves” with a solar installation. She explained for the next 10-25 years, whatever money she and her husband aren’t paying in electricity will be the return on their investment.

Her system comprises 22 panels and cost $33,000 before the 30% federal investment tax credit rebate they expect to get back on this year’s taxes.

She said when you meet with an installer they will let you know where you can get the biggest bang for your buck in terms of placement as well as talk with you about how many kilowatts you really need for your home.

When asked if there was anything she would change about the panels, Denise said she wished they had wipers on them to remove the snow because snow covers the panels and that snow isn’t going to fall off unless you purchase the panels on a swivel. If not, you wait for the snow to melt.

Installing a solar system made sense to Denise and her husband because their heating and cooling systems are both electric. She said they don’t have a gas backup, just a heat pump and regular electric heat.

Though Denise and her husband have a large solar system installed, smaller systems offer many benefits as well.

A woman living in Iowa who attended the meeting said she had six panels installed at her home and they have helped her energy efficiency. She said you don’t need a large array to really make a difference in what you’re burning up as far as your carbon footprint.

Her system cost $3,000 after the 30% federal investment tax credit and the 18% Iowa tax credit. Currently, Nebraska offers no tax credits for the installation of solar energy.

How do you know just how many panels you need? Well, the first thing is to figure out how much electricity you use. Holtzclaw said you approximate your cost of usage by taking your monthly bill and dividing it by 30 to give you a daily total. Taking it a step further, if you divide that number by 50%, you get a perspective of the energy you’re consuming during the day that you can offset.

“There is a one-to-five ratio. For every kilowatt of energy you have of solar, you can expect it to generate five kilowatt hours a day. So if you have 10-kilowatt hours a day of need, then you would have to get a 2-kilowatt system. And since it’s not always sunny, you might actually need a slightly bigger solar system,” he said.

Holtzclaw explained people historically were trying to cover their baseload, or the amount of energy their property consumed at any one time, from their lights and TV’s to their computers and refrigerators.

“Typically, 40% of your energy consumption is in baseload, with another 40% in your heating and cooling systems,” he said.

“When it’s running, a three ton air conditioner uses 11 kilowatts. So if you decide to go off the grid completely and run a standard A/C unit, you won’t be turning on anything else. When going off the grid, your cost jumps hugely because there’s a big difference between covering ALL environmental impact versus baseload,” said Holtzclaw.

And utilities don’t pay you much for what you do feed the grid. You are buying at retail but giving energy back to the utility at wholesale. Right now, residential customers are paying about .11 cents per kilowatt-hour but are only selling it back at a little over .04 cents per kilowatt-hour. Installing a solar system may not be cost effective on that front.

In addition to the federal investment tax credit of 30% (extended through the end of 2019) and the 18% tax credit in Iowa, there are also grants for farmers who want to install solar. Additionally, people have the option to take advantage of 10-year loans with a 2.5% interest rate through the Nebraska Energy Office.

Eric Williams is the President of NFS. With help from Michael Shonka, Owner of Solar Heat & Electric (also a member of NFS), he installed a three-kilowatt system on his house a little over a year ago. Over the course of the first year, he said his system produced 92% of the net electricity he and his family used in their home.

Williams worked with Shonka and a few other NFS members to do the rack install himself. They mounted panels on the roof, paid a licensed electrician to do the connection to the breaker panel and pulled the permit with the city of Omaha.

“It was a rewarding process. In November of 2014 we were on the Green Home Tour and a student visited our home and left feedback indicating he was excited to actually see solar panels and see how they worked,” said Williams.

Williams’ said he is specifically interested in sharing information about his experience with others who want to install their own systems. He encourages anyone who is interested to come by and take a look at his Dundee residence.

To get an idea of the size of system you would need for your home as well as the amount of energy generation you can expect, check out this easy online tool: http://pvwatts.nrel.gov/

“When you hire a solar installer, they will tell you where you are at with your consumption, where you should be, what solar will do for you and what it won’t do for you,” said Holtzclaw.