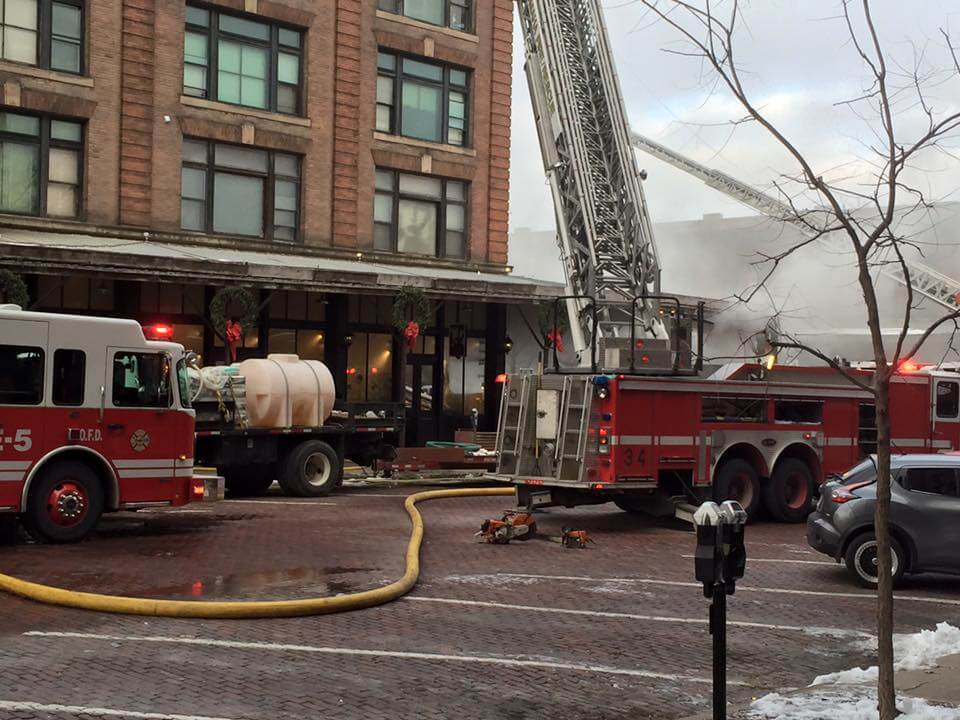 Firefighters have worked in shifts throughout Saturday, battling not only the 3 alarm fire that engulfed M’s Pub, but also the single degree temperatures that have made working outside unsafe.

It remains unclear what caused an explosion, which blew out the front window of the building on 11th and Howard around 2:45pm, but witnesses in the area reported the smell of gas before feeling a quake and watching flames slowly take over. The apartments above M’s were quickly evacuated and injuries that were not considered life threatening sent 3 people to the hospital for treatment. Next door, Jams and Old Chicago were also evacuated before anyone was injured.

The residents of 14 apartments situated above M’s are facing the heartbreak of knowing that their homes are now lost to the fire,which as of 10:45PM was not yet contained. The Red Cross has been working diligently to provide for the displaced families.Those in need of help are encouraged to go to The Residence Inn at 106 S. 15th St., where the Red Cross has a staging area.Anyone interested in assisting the fire victims can text 90999 to automatically donate $10 or phone 1-800-Red-Cross.

Due to the high risk of collapse, crews have been ordered to move away from the building to keep fire workers safe. The lowest level of M’s collapsed earlier in the evening, Pumps began freezing due to the low temperatures, and crews are forced to take regular breaks to avoid exposure.

The Staff at The Reader extends our thoughts to the community, residents, and to owners Ron Samuelson and Ann Mellen, and will do our best to keep you updated on these events as they unfold.