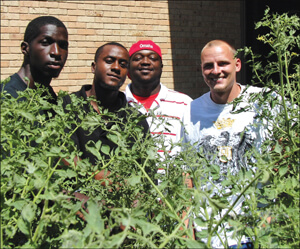 Inner-city team plants healthier neighborhoods “Oh no, Jumoke! Not the azuki!” It was early in the growing season and Jeannie Dickes’ reaction to her City Sprouts co-director Jumoke Omojola came after discovering that the beans were accidentally pulled from a plot by a fresh crop of would-be gardeners. “I have to learn to let it go,” Dickes said with a laugh. The budding gardeners more than made up for the accidental uproots. Organized as the Grown in North Omaha project, seven more gardens were added in the North Omaha community this year alone. “People need to go back to the land,” Dickes says. She describes herself as “rooted in” the neighborhood, as one of five generations of family that’s called the area home. “Everybody is different. Everybody has a gift,” she says. “It takes a village.” This “village” is concentrated in North Omaha and includes cooperation from area organizations such as Orchard Hill Neighborhood Association, Grown in North Omaha and The Big Garden. Funded primarily through grants and donations, City Sprouts also garners income from the Florence farmer’s market, an annual plant sale and gala fundraiser events. In 2005, a large house neighboring the half-acre City Sprouts community plot at 40th and Franklin teetered on the brink of occupation by a slumlord, when a generous donor gifted the two-story home to the organization. It’s now host to educational classes on topics such as nutrition, cooking, home crafts and healthy living. Though the organization is gaining strength, challenges still arise. Stolen produce, lack of financial support and low volunteer interest attack the gardening community like weeds. “The way traditional agriculture was 100 years ago, people had to work together, they had a vested interest,” says Edgar Hicks, agribusiness regional representative of the national Sustainable Agriculture Research and Education (SARE) organization. Funded by the USDA, the SARE program promotes sustainable farming and ranching, offering competitive grants and educational opportunities for those interested in exploring sustainable agriculture. SARE held its first listening sessions at Metropolitan Community College’s Culinary Institute, Sept. 23-24, followed by a local harvest dinner, prepared by MCC entirely from locally grown products. “We all eat,” Hicks says. “And since you eat, you are involved in agriculture. I hope to see more families and communities sharing food and breaking bread.” “I’d like to see people grow while growing food,” says Leo Louis, project coordinator for Grown in North Omaha. He got involved in City Sprouts in 2007, after a small support group he volunteered for expanded into gang intervention and outreach. “My interest is in people. What we are here to do is to help educate,” Louis says. “One volunteer was fresh off the streets. He’d gone straight from gangs to gardening.” Even with ongoing support and education, the garden still endures the occasional casualty. “Last year it was the mustard greens,” head gardener Sheryl Fratt says. A volunteer since the garden’s inauguration in 1995, Fratt’s freckles evidence her years of dedication to this form of urban revitalization. This season, Louis instructed a new volunteer to eliminate the weeds in an area plot. “He grabbed a rake and was doing a great job,” Lewis says. But afterwards they discovered he had plowed up the rhubarb plants. “The garden is very forgiving,” says Omojola. “It’s only a plant, another one will grow.” Though each person has a different role in building successful sustainable urban agriculture in the area, they can all agree that volunteer involvement is key. “I would like to see more participation, especially from people in the Orchard Hill neighborhood,” Omojola says. During growing season the public is invited to weekly “work parties,” Wednesday nights from 5 p.m. to dusk and Saturday mornings from 9 a.m. to noon. Organizers also encourage children to become involved in after-school programs. “We are sowing a seed and it is growing,” Omojola says. “Slowly, but surely.” And perhaps the best, most nourishing harvest is the continuation of generous giving and sharing of all involved. Hicks encourages people to apply for grants at sare.org. Visit citysprouts.org for more information on the organization. Full Disclosure: Publisher/Editor John Heaston has been involved with the Grown in North Omaha program through CitySprouts, even though he doesn’t always eat his vegetables.