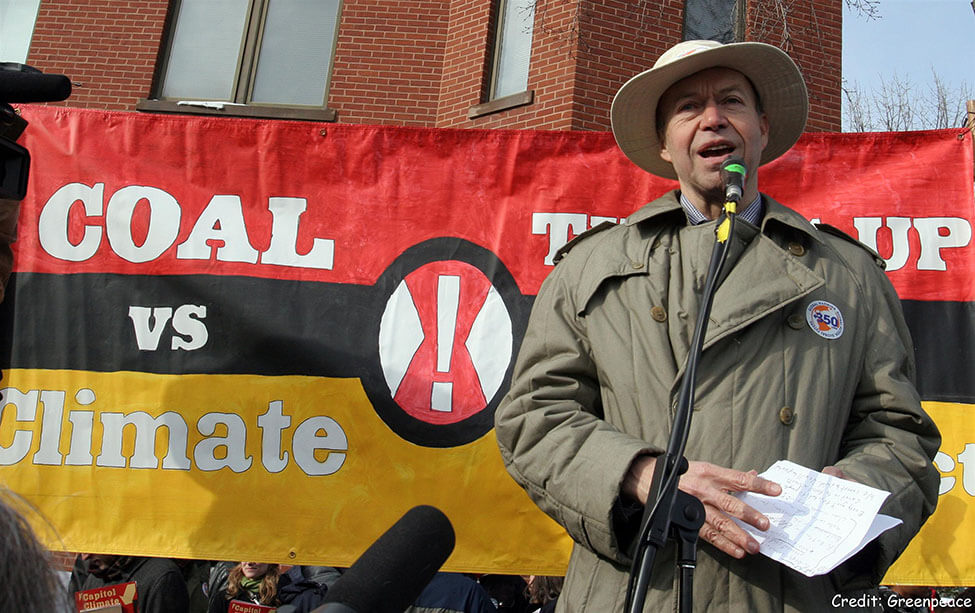 Thirty-five years after he and other scientists first reported that burning fossil fuels was creating a greenhouse effect that was warming the planet, the former head of NASA’s Goddard Institute for Space Studies and current professor at Columbia University is pressing for an immediate solution.

The only solution that will work, he’s convinced, is one that would put a check in every person’s pocket.

Hansen is coming to Omaha to publicly support the Nebraska Peace Foundation’s shareholder resolution at the annual Berkshire Hathaway shareholder meeting in a April 30 rally with Nebraskans for Peace and BOLD Nebraska that runs from 12-1:30 p.m. outside the CenturyLink Center where BH’s annual meeting is held. Hansen will also be giving a free lecture at Creighton University’s Harper Center on Friday, April 29, 7 p.m., titled “Energy and Climate Change: How Can Justice Be Achieved for Young People?”

Chairman Warren Buffett has urged shareholders to vote against the resolution, despite stating in his annual letter to shareholders, “[I]f there is only a 1% chance the planet is heading toward a truly major disaster and delay means passing a point of no return, inaction now is foolhardy. Call this Noah’s Law: If an ark may be essential for survival, begin building it today, no matter how cloudless the skies appear.”

Bold Nebraska seized on the ark comment with its own online petition. Hansen believes the “ark” can be quite simple, what he calls Fee & Dividend.

“The fundamental thing that is needed is to make the price of fossil fuels honest, to reflect their costs to society,” Hansen explained in an interview. “Presently the external costs of burning fossil fuels — the effect of air pollution, water pollution and climate change — are all presently born by the public and they are not included in the price [of fossil fuels].

“Fossil fuel companies are allowed to sell their product and to use the atmosphere as a free waste dump without any charge.”

The collection of the fee would be straightforward and would create a cascading effect if the world’s two biggest economies participated.

“The way to deal with that in an economically appropriate way would be to add a gradually rising fee,” said Hansen, “which is very simple in the sense that it would just be some dollars per pound of carbon, which you could collect at the source or at the domestic port of entry.”

“[Every country] will have to accept a carbon fee if China and the U.S. would agree to do it. They would put border duties on products from countries that don’t have an equivalent carbon fee and that would induce almost every nation. They would rather collect the money themselves than have us collect it at the border.”

Rather than use the fees collected to subsidize renewable energy or otherwise fight climate change, Hansen insists the revenues should be directly distributed back to the public, dollar for dollar.

“If you put that money back in to the economy immediately by distributing it to the public, it actually stimulates the economy . . . The best way to fight climate change is to move to clean energies and  . . .  the best way to do that most efficiently is to let private industry do it. The last thing you want to do is give the money to the government and let them invest it. They have proven time and again that the private sector is a much more efficient use of money. I worked for the government for decades in one of the better agencies and that’s not what you want to do.

“Let the market decide the role of renewables.”

Though Hansen highlighted the support of this idea from Republicans like former Secretary of State George Schulz and, albeit for only a day, Grover Norquist, he has always insisted he has no political affiliation.

“I’m politically independent,” said Hansen. “I’d say that I am a typical midwesterner with suspicions of government, but I’m not a Republican. I’m neither a Democrat nor a Republican. It is true that the solution to climate change is very consistent with conservative principals.”

Hansen first wrote about this solution in 2009 and it was prominent in his 2014 Ted Talk. Calling the Paris Agreement “wishful thinking,” he says we need to learn from the failed cap-and-trade solution previously offered and mostly supported by congressional Democrats.

“The cap-and-trade bill in the Senate was 3500 pages long because every lobbyist who could raise his arm to write a paragraph got it stapled into the bill,” said Hansen. “What you actually want is for it to be around one page. You want a very simple, honest system, where you don’t let the fossil fuel industry and every lobbyist get involved.

“It allows you to pay off various industries, including the fossil fuel industry, and it brings big banks into the solution. They have skilled trading units and they make money off fluctuating markets. The energy industry is trillions of dollars, so there’s no way to keep banks out of this. They would make money and every dime that they make comes out of the publics’ hide in increased energy prices. So that makes absolutely no sense to use this approach, but it’s what politicians do.”

Now that the argument over climate changes is ending around the world in all but the most conservative Republican circles in the U.S., Hansen is trying to move past that minor skepticism to a real solution.

“[Skeptics] are not going to change their mind, even though the last year has been the warmest in recorded history and the last few months even warmer on a global average, but you can’t change the minds of people’s whose positions are based on ideology, not on scientific data.

“It’s important that the policies are the appropriate ones and that’s why I’m coming to this meeting, because I think that Bill Gates and Warren Buffett can understand that you need to, if you want to phase down fossil fuels, you need to do it in a way that is not economically damaging to the country.”

Hansen urges everyone to get involved in the Citizen’s Climate Lobby as the most effective action to take today to fight climate change. Find out more about the Omaha chapter here.