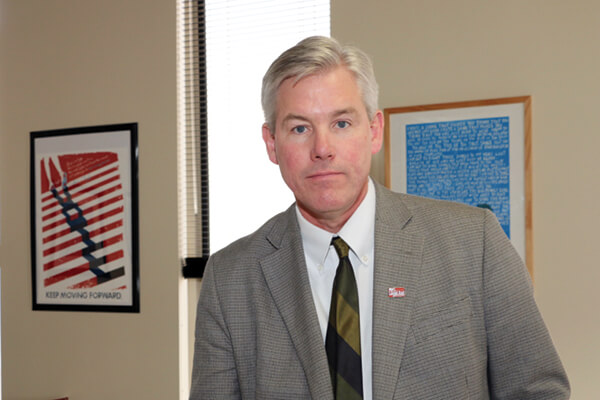 When Milo Mumgaard, Executive Director for Legal Aid of Nebraska, made his way back to the legal aid world a year and a half ago, he had a very specific thought he wanted to pursue.

“I wondered how we could do more to address the intersection between the vulnerability of low-income people to climate change impacts and the work we do at Legal Aid,” he said.

He explained Legal Aid of Nebraska represents low-income people and addresses any legal problems they may have as a result of being in poverty.

Mumgaard’s background is almost entirely legal aid and public interest work. He said he had the good fortune of working with Mayor Chris Beutler for six years as his general counsel.

“I primarily used stimulus funds to develop sustainability and energy programs for the City of Lincoln. During that time, I became conscious of the overlap between the equal justice work I had done for low-income people, the social inequity associated with the impacts of climate change and the ways in which public policies and laws operate with respect to low-income people and their vulnerability to those impacts,” he said.

Though he admits there’s nothing new about the fact that there’s a relationship between the inequities facing low-income people and the impact of climate change, it’s not often talked about in the United States.

“You might think about it in terms of places like Bangladesh. There are a lot of people thinking about what will happen when the sea overtakes the lowlands. But you sure don’t think about it in the context of poverty and climate change in the United States, much less Nebraska,” said Mumgaard.

He explained that Legal Aid of Nebraska already has a program focused on training attorneys and reaching out to partners around the state to get everyone up to speed on how to educate low-income individuals about ways to prepare for disasters.

“This program is largely an outgrowth of concerns on the part of big philanthropy groups about communities that have had tornadoes or major flooding events and how the people and those communities were not prepared to deal with the impacts,” he said.

The other issue in these types of situations is that lawyers haven’t always been well versed in how to help people with these disaster problems.

And, as Mumgaard said, most of these disasters are the result of or generally associated with climate change.

“Scientific analysis of climate change indicates there will be more floods in the Midwest, more intense rain events and storm events that lead to significant storm water and flooding problems. It’s something that’s talked about as a likely consequence of climate change,” said Mumgaard.

He wants to build on what Legal Aid of Nebraska is already doing concerning disaster relief. Mumgaard said it’s important to train more lawyers and to get information out to low-income individuals about their basic legal rights.

Not only that, but these people also need to know what protections they have from floods, what type of flood insurance is available, if any, and what laws exist that protect individuals in the event of a flood if they are renters versus owners?

Mumgaard said flooding is a good example because the individuals who live in the flood plains tend to live there because the housing is more affordable. He said this means renters and owners are more likely to be low-income in those areas.

“We’ve expanded our thinking in legal aid regarding disaster relief. We are focusing our thinking on what can be done to provide outreach to people living in the flood plains. We want to find out if they are aware they live in a flood plain, if they’ve done anything to find out whether they are protected in the event of a disaster and if they or their landlord have flood insurance,” he said.

It’s part of a general effort to educate the community about the risks they run living in the flood plains as well as the dangers of being exposed to potential floods coming down the road.

Mumgaard explained it’s not just the renters’ or homeowners’ responsibility to prepare. He said there needs to be some effort on the part of public officials and public entities to step up and help. There have to be protections provided for low-income folks, not just insurance, but also benefit programs that help them get back on their feet after a disaster

“When I worked for the City of Lincoln I was attentive to what the city’s responsibilities were in the event of a disaster, especially related to low-income people living in flood plains. And we did see floods and sewer backups and buildings destroyed as a result of that. We had people in basement apartments losing all they owned due to sewage backups,” he said.

Ultimately, Mumgaard said the public utilities have some responsibility to assist but if Legal Aid or a good lawyer does not represent you, you’re not going to get much in the way of relief.

And though flood insurance is not required at present, Mumgaard thinks it might be wise for public bodies to start thinking about how we can help low-income people by requiring property owners to buy flood insurance. He said this would protect low-income renters.

When a disaster occurs, low-income individuals can face a mix of problems, from loss of assets, important tax papers and documents to the loss of employment because they can no longer get to work.

“When people have big disaster events in their lives, things can quickly spiral out of control, especially for low-income people,” Mumgaard said.

Low-income individuals will feel impacts in other areas too such as energy, food, transportation, and water. Mumgaard said all of these things have costs to them and are considered limited resources. When climate change happens, these resources become more expensive and difficult to find.

One example is the colder winters we have in Nebraska. He said if we don’t prepare low-income people to better deal with the weather by properly insulating older homes and providing more efficient heating, those people are not going to be able to pay the bills they are facing.

“Low-income families and workers should not be the ones that absorb the higher cost or risk due to climate changes,” he said.

Mumgaard explained Legal Aid thinks about how they can isolate out the types of impacts people will face. They want to help educate low-income individuals about the best ways to prepare. He said they also want to get the attention of lawmakers and public policy makers and get them to think about how to better protect low-income people from these likely impacts from ongoing climate change.

He said once you start looking at the impacts of climate change and environmental degradation, you tend to have a situation where folks with higher incomes are more concerned about it from an environmental and quality of life context.

Mumgaard said while this is a legitimate point of view, these people often forget how these issues play out in the lives of low-income people, “in ways that compound problems they are already experiencing, like making ends meet, living in decent housing, and having security and stability in their homes.”

He said low-income people are on the front line of climate change impact and we all need to think about that.

LegalAidofNebraska.org has a disaster relief page on its website