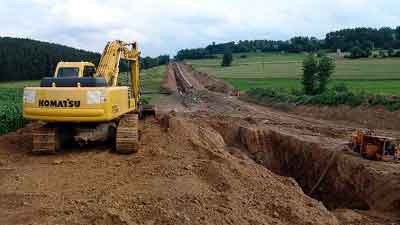 Story taken with permission from Nebraska.StatePaper.Com Also see: Our April 21 cover story via Prairie Fire: Water Amnesia: Risking our most valuable natural resource for an oil pipeline could prove costly The Legislature gave second-round approval Monday to a bill that mostly gives lip service to the notion that the state would hold builders of the proposed Keystone XL pipeline responsible for potentially disastrous environmental accidents. In Washington, meanwhile, a Republican measure introduced in the House would give President Obama a make-believe Nov. 1 deadline for deciding whether the proposed 1,600-mile, $13 billion project will be allowed to transport oil sands crude from Alberta to refineries on the Gulf Coast of Texas. The measure sent to a final vote Monday by lawmakers has the approval of the pipeline builder. It would hold the company responsible for reclamation of soil and water resulting from construction of the pipeline, or accidents thereafter. The company had previously said it would voluntarily handle those situations. The bill would not create liability for damages to property or subsequent loss of income; those provisions were stripped from the bill when the company objected to them. Nothing in the law prevents landowners from asking the company to negotiate individual contracts covering potential damages. The pipeline would run through Nebraska’s porous Sand Hills and over the vital Ogallala Aquifer. Landowners and environmental groups have expressed everything from concern to outright opposition to the plan. A report from the Congressional Research Service said state Legislatures — not the federal government — have authority to regulate the routes for pipelines. That means the Nebraska Legislature presumably could order the pipeline be routed around the Sand Hills and the aquifer. However, neither the Legislature nor Gov. Dave Heineman have indicated any interest in getting involved. The company has objected to the notion of states having a say in the pipeline’s route. Critics, including Republican U.S. Sen. Mike Johanns, have agued that the pipeline should take a route other than the one planned by the company. Some have also complained that TransCanada, the company that owns Keystone XL, has improperly told landowners that if they don’t negotiate a right-of-way for the pipeline, their land could be taken through eminent domain. It has yet to be decided whether the pipeline project would even meet qualifications necessary to invoke eminent domain. Rep. Lee Terry of Omaha said Monday the Obama administration had dragged its feet for 33 months in deciding whether to issue a permit for the pipeline’s construction. That decision will ultimately be made by the State Department. Terry acknowledged the bill he offered Monday couldn’t bind the administration even if enacted. The potential value of the pipeline, for anyone other than TransCanada, is in dispute. Proponents say it could greatly reduce the amount of oil the U.S. needs to import. That view is disputed by others, including the National Wildlife Federation. The latter argues that the pipeline will take oil away from Midwest refineries, ship it to the Gulf Coach, from where it could be sold to China. Terry disputed that notion, saying the pipeline could have gone directly west if the intent were to ship oil to China. However, he did not address the possibility that states further west would hold Keystone XL to tougher siting and liability standards, thus making the current proposed route easier to complete. This story was reprinted with permission from Nebraska.StatePaper.com.