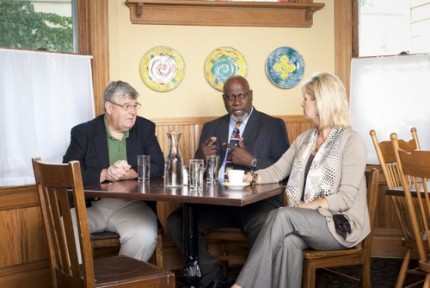 The uneasy place which race inhabits in the collective American psyche leaves most discussions of the subject to academics, activists or attorneys. But its reality permeates much of the social-cultural fabric.

Rhetoric about race is common. Conversation, less so. In these politically correct times, with a topic so tinged by the emotional weight of the past, no one wants to offend; therefore, often nothing is said. Except for brief periods, race has not been at the forefront of a national dialogue. Keeping it at bay adds to the angst, be it white guilt or minority outrage. In Omaha, where the geographic and socio-economic gulf between races is great, opportunities for exchange may be few.

So it is not surprising a formal apparatus exists for bringing people together over the very thing that often divides them. Omaha Table Talk (OTT), now in its seventh year, is a forum for individuals, couples, friends, acquaintances and complete strangers to share personal testimonies, discuss issues, watch films and hear presentations that touch on race.

It’s not alone, either. Since 2009 Progressive Omaha, First Unitarian Church,  Nebraskans for Peace and other sponsors have sponsored Black-White Dialogues.

Table Talk’s free, October 20, 6:15 p.m. to 9 p.m. signature event will find hundreds gathering at homes, community centers, places of worship, companies and restaurants to talk about race-ethnicity over dinner. The idea is that breaking bread with The Other allows you to get to know someone beyond assumptions or roles.

Valerie Hankins signed up for a 2009 Table Talk to represent how a black woman like herself can be a professional and should not be reduced to a media image. A staffing specialist at Sterling Computers, she got about what she expected at the confab.

“I truly felt there were people from diverse walks of life.” She says it was evident certain biases she and other black guests described were revelatory to some white participants. “I felt as if a lot of the things we discussed that night were things they were unaware of — they were oblivious to it. A lot of times people just don’t know what they don’t know.”

An average of eight to ten participants attend each dinner. There’s a host and a facilitator. A few set questions, such as ‘Why are you here?’ and ‘Have you experienced a racial incident?’ act as conversation starters.

Phyllis Brown has become such a Table Talk advocate she now serves on the nonprofit’s board.

“It just turns out each time I’ve attended, hosted or facilitated it was a great experience, it really was,” says Brown, Single Parent Displaced/Homemaker Coordinator at Metropolitan Community College.

“There’s things we may want to ask, things we may want to say, and you can really say it and do it in those settings,” Brown says. “Some of the subject matter is very heated. There’s some defensiveness. There’s yelling sometimes. But if you have a great facilitator who reminds people what we’re there for, you will walk away a changed person, you’ll take something away from that table. And if you don’t, you at least had that opportunity to have that dialogue.”

Yes, tempers can fly, she says, “but at the end of the day whatever that commonality is that brought us all together we end it on that. That’s the beauty to me.”

“Though it may seem insignificant, there’s great things that come from these events. We just have to figure out how to measure that. The end result of this is, How do I build a relationship with the people in the room and how can we maybe continue this? Our tag line is, ‘You come in as strangers, you leave as friends.’ It doesn’t take a lot but a meal to break the ice.”

He says Table Talk off-shoot “groups are starting to get together.” Miriam Aviva Datya facilitates one called ALLIES. It grew out of a 2010 Table Talk she facilitated that, she says. “was such a positive experience…we decided we wanted to continue the discussion.” The topic-oriented group meets monthly. Datya says, “Some of our previous topics include white privilege, use of the N-word. We also watched a documentary, The Color of Fear. What makes the group successful is we are willing to challenge each other in a way that’s courteous.”

Phyllis Brown says a dinner she hosted at her home led some women guests to invite her to join their book club.

“I now am a member of a great book club,” she says. “We do outings together. Some friendships have been forged from it. It’s probably a group I would never have connected with on any other level. I’m telling you, it has just been a beautiful experience. There’s some other groups I meet with that are spinoffs from Table Talk.”

These sprouts, say Brown and Byndon, are evidence the spirit of Table Talk can and does find new expressions. “If you come with an open mind it can just lead to some wonderful things — whatever you really want to do with it,” says Brown.

There is a preaching to the choir element to it all, as OTT attracts progressive, educated folks who already embrace racial harmony and support inclusion. Some, like Byndon, an activist and educator, work on the front lines.

Ironically, OTT itself has lagged in diversity says Byndon. “Our goal was to have one third to one half of participants be people of color, and that has not always been the case. That’s one of our biggest shortcomings.”

Numbers aside, everyone is there to affirm interracial-multicultural unity.

“In some ways,” says McFarland, “you might be preaching to the choir, but you never had the chance to find out there’s other people in the same choir, right? You didn’t know there were other choir members from around the city at the same table. Omaha’s perceived as a city of towers, but when you come to the table you find out there are other people that don’t see that the city has to be that way, and that you can make a difference in your neighborhood.”

Before going public, Catholic Charities staff and invited guests convened a trial dinner. That first dinner led to a couple more and before long OTT became a citywide event with ever increasing participation. While the numbers are no longer doubling as they did the first few years, Byndon says a record 500-plus folks met to eat and opine last year. He expects more participants this year.

As many as two-thirds who participate today are repeats, says Byndon, who followed the program when it left Catholic Charities in 2009 to become a freestanding nonprofit housed at the Neighborhood Center, 115 South. 49th Avenue.

What makes OTT a draw, he says, is the non-threatening framework it offers for addressing things that too often are not discussed.

“Omaha is a very racially divided, silo community with our north, south, east, west divide. We’ve had a lot of issues and incidents, you name it, and people repeatedly say they want this type of venue or platform to share some of their positive and negative experiences. There aren’t a lot of organizations and entities who bring people from the grassroots and the treetops levels together to break bread and have conversations.”

Byndon, whose late mother Lerlean N. Johnson was among a group of Omaha parents who brought the lawsuit forcing the city’s public schools to implement mandatory desegregation, says he was reared to promote integration and racial accord.

“I think Table Talk is a small way for some people to do that; to walk the talk.”

The by-registration-only event allows participants to self-select what level of dialogue they desire: entry, intermediate or advanced.

“The people that come to the table have varying levels of experience and different levels of comfort in talking about racial issues,” says McFarland.

“I think it’s very important Table Talk has expanded its levels to take on deep business, because you don’t want to take an entry level person and give them one exposure and say, OK, go out and thrive,” says Partsch. “That’s not enough probably in most cases. But if we’re ever going to make a difference, it’s going to be to find the people who are on the sidelines now.”

McFarland says she long yearned to connect with people of color, who were not where she worked, shopped, prayed or lived. Table Talk gave her that entree.

She says it’s not so vital what level you sign up for as simply being willing to listen and share. “This is not a lecture system,” she says. “The premise of this is to allow everybody that comes to the table to have a voice, and that’s the purpose of the facilitator, to not let one person run the conversation and get on their own platform.”

“You have a facilitator to be sure the train doesn’t come off the tracks,” adds Partsch.

If a facilitator does it right, OTT organizers say, participants feel they have permission to say what’s on their mind without censoring themselves.

“It’s really an opportunity for people to tell their personal experience, where they’ve been, where they’ve come from, and then ask other people about their experiences, and not judge them but actually have a dialogue,” says McFarland. “It’s an opportunity for people to take their coat off, loosen their tie and not be judged and have stones cast at them for asking some of those questions that are taboo. It gives people a chance to have a voice with that stuff and to share it.”

Cathy Nelson recalls everyone at the 2010 Table Talk she attended leading with their weakness, sharing some vulnerable moment from their lives, from the man who served time to the college student who came out to his family as gay. She appreciates how “authentically” people communicated that night.

Partsch says participants like himself are invariably “visibly affected” by the sharing.

Organizers say there’s almost always a nervous admission by one or two guests that it is the first time they’ve sat down to dinner with a person of another race or visited the home of someone of a different race. Others acknowledge they are visiting a part of town they’ve never been to before. And for still others Table Talk may be the first occasion they’re discussing race outside their own home or inner circle.

Nelson says, “Race was the least of issues for me. Going to dine with strangers was more of an issue. Who wants to go have dinner with people you’re not really comfortable with or you don’t have experience with?” But the Blackburn High School teacher appreciates the importance of pushing beyond her comfort zone to learn new realities. “People have got to get out of their neighborhoods and see what this city has to offer. We have to be open to each other.”

McFarland says OTT has a way of teaching tolerance. As a result, she says, “My world has way opened up.”

Partsch says, “If it has changed me it has made me a lot more optimistic about the community and its future, seeing the amount of goodwill that’s out there.”

Byndon says, “One of the things I’ve learned from doing Table Talk is to have patience. Back in the day, if you didn’t agree with me you weren’t right. But I’ve learned you can be from the same racial group or a different racial group and have a different lived experience, and we can validate that. If we come with that notion, that there’s going to be different perspectives and different world views, then we can move forward.”

For online registration, visit www.omahatabletalk.com. For a schedule of OTT panel discussions, open dialogues and other events, call 402-561-7594 or email omahatabletalk@gmail.com.