Home » News » From Patient to Provider 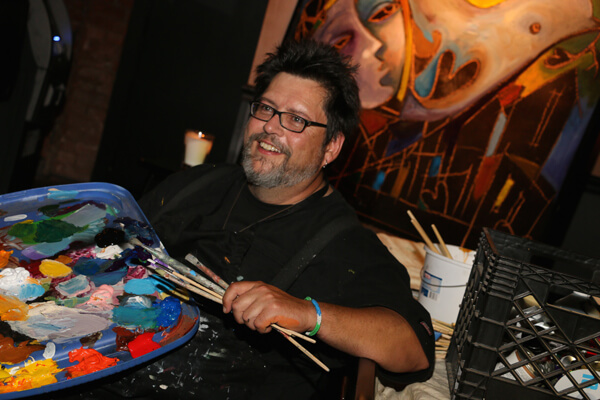 Robert Donlan is sitting across from an artificial fireplace, wearing jeans covered in paint.  “I have found it best to always keep a light burning. I have no interest in being in the dark anymore,” reads an excerpt from Open Door, a play he wrote chronicling his battle with schizoaffective disorder.

Donlan refers to his illness as “a mixed cocktail of schizophrenia and bipolar disorder.” He says the main difference is that instead of mania, he experiences psychosis, often resulting in visual and auditory delusions.

“He gets that extra kick,” says his wife, Teri.

A 52-year-old Omaha native, Donlan experienced his first psychotic break at age 29 when he was living in Chicago.

“I was under a great deal of stress,” he said. “That’s kind of the break point for people.”

As with many mental health patients, Donlan was dual-diagnosed with addiction. He says he can’t be sure that he used alcohol and drugs as a way of self-medicating.

“That’s a chicken and egg riddle I don’t care to solve,” he says. “But I became dependent on those things and had to stop.”

To help with his alcoholism recovery, Donlan worked in a detox unit for a while before taking a job at the Spring Center as a behavioral tech. Unfortunately, the best training he had wasn’t something he could put on his resume, he jokes.

“You have to keep that stuff to yourself,” he says.

Donlan says his job as a behavioral tech gave him insight as to why the burnout rate of mental health workers is so high.

“It’s too hard of work. It wears you down,” he says. “I have nothing but respect for people who work in that field.”

Donlan says a large portion of successful treatment is up to the patient. It’s important to care for your mind in the same way you would care for a broken leg, he says.

“Some people think the medication should do it all,” he says. “I learned very early on that it’s a percentage. It’s really up to me to thrive.”

Donlan admits he had moments when he stopped taking his medications, particularly when he felt that they stunted his creativity.

“It was like my mind was wrapped up in saran wrap,” he said. “There was a little fear when I came home from the hospital that my creativity had led to my illness.”

Donlan’s first play, Open Door, was a four-year process that he completed with the help of the Behavioral Health Education Center of Nebraska (BHECN). He was presented with one of several grants BHECN provided to help break down stigma.

“The biggest thing with mental health is the stigma involved,” he says. “People don’t like getting treated. They feel ashamed of it.”

He said society has the tendency to separate the body at the neck: it’s fine to fix anything below the head, but fixing the mind is a different issue.

“I never really understood why my brother, who takes medicine for his diabetes and blood pressure, is regarded differently than me taking medicine for my mind,” Donlan says.

He says the portrayal of mental illness in the media plays a role in reinforcing stigma. Every time there’s a mass murder, Donlan says, people point fingers at the mentally ill.

“In some cases, it doesn’t look like mental health,” he says. “It’s a weird area we haven’t figured out.”

Instead of feeling ashamed, Donlan says, it’s important that people rise above the stigma and learn to accept their diagnoses. It’s easy to want to blame something else, he says.

“I had to accept my illness and I had to take responsibility to recover and thrive,” Donlan says. “Once I started doing that, I got better.”

One of the best forms of treatment was his artwork, he says. He refers to his painting style as “goofy” and admits to often using his fingers and saliva to compose a piece.

Several of Donlan’s works are currently on display at Lincoln’s Nonprofit Hub, as well as other locations throughout the state.

“It’s a reflection of where I’m at,” he says about his work.

Despite being diagnosed with colon cancer in August, Donlan hasn’t slowed down.

“I’ve been writing a lot lately,” he states.

His most recent monologue, Red Bucket, illustrates the battle with his newly diagnosed illness.

“Cancer changes you in knowing that you probably shouldn’t be here,” he says. “It makes you think a little differently.”

To help him get through some of the treatment, he’s contemplated creating a cartoon character named “Chemo Bob.”

“I’m allowed to because I have cancer,” he says.

Though both of Donlan’s diagnoses are considered “illnesses,” they’re treated very differently, he says. He pulls up a comic on his computer featuring three bottles of glue: an ordinary bottle, a bottle of “super glue” wearing a cape, and bottle of “crazy glue” holding an axe and a decapitated head.

“I don’t think I’m being overly sensitive to that,” he says. “There aren’t a lot of cancer jokes.”

If Donlan has regrets about anything in his life, his mental illness is not one of them.

“Normal is the setting on a dryer,” he says. “Nothing is normal.”

People have a tendency to perpetuate their own misery with an imaginary idea of what their life is supposed to look like, he says.

Donlan has been off of antipsychotics for about 10 years. Despite his recovery, he says he still has the tendency to second-guess himself.

When he hears a strange noise, he’ll often look at his wife, who usually responds with, “Yeah, I heard it too.” ,