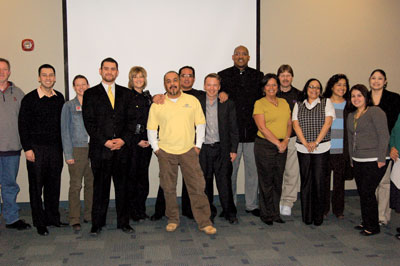 Alberto Gonzales didn’t enter the meeting room at the South Omaha Library on March 15 so much as the room opened up and embraced him. The 30 or so community leaders at the first South Omaha Violence Prevention and Intervention meeting included: local clergy members; representatives from the mayor’s office; citizens; school advisors; the captain of Omaha’s Southeast Police Precinct; and outreach workers from various city organizations. Gonzales arrived early, greeting everyone with a hug, a handshake, a fist bump — some in English, some in Spanish, whatever formed the best connection. It’s what Beto does best — he’s devoted the past three decades to helping others — but the job has become a little more difficult lately. The Omaha Boys and Girls Club is feeling the effect of the reeling economy, like many organizations. For 37 years, Gonzales was on the streets visiting schools and prisons as the organization’s lead gang interventionist at the South Omaha branch. But budget cuts at the national orgnazation has forced Gonzales to shift his focus. He now works mainly out of the South Omaha office. And while he’s grateful for the opportunity, he recognizes what was lost. “I’m not out on the streets. I’m not in the schools or intervention centers, and that was my love,” he says. “But I’m still here in the building mentoring quite a few kids. There are some hard-luck stories here and I’m glad that I’m working with them.” Helping to replace some of those services was one of the primary goals of the South Omaha Violence Prevention and Intervention meeting. The mayor’s community liaison, Roger Garcia, and Southeast Police Precinct Captain Katharine Gonzales led the group to identify the problems facing South Omaha, and to brainstorm solutions. There was no shortage of ideas or agencies ready and willing to help. The discussion touched on everything from teen pregnancy and dropout rates to community policing and the effects of anti-immigration legislation proposed in Nebraska. Rev. Howard Dotson of Westminster Presbyterian Church says he’s already seen the debate surrounding the Fremont immigration ordinance and the recent failed attempt to pass an Arizona-style law at the state level take its toll in South Omaha. “The number of people who went into the Southeast precinct for help dropped the day after Arizona signed its bill into law,” he says. “There are rumors on the street that police are checking papers, even though it’s not their policy to do that. Now we have to repair what’s played out from Fremont and Lincoln.” Dotson believes the group can help the community develop a multi-pronged approach to address some of its problems. “The intervention and prevention meetings will help us figure out who’s at the table, where are the gaps, how do we coordinate efforts. It takes a whole team,” he says. “We need to figure out what grants are out there and how we can come together so we don’t duplicate our efforts. It’s about appreciating the advantages one group has and celebrating one another.” Gonzales thinks it can work. After the official meeting adjourned, an impromptu after-meeting formed organically to keep the discussion going. The passion was there and perhaps nobody knows how valuable a mentor can be more than him. “In my lifetime, I’ve had a lot of people stop me on the street and thank me for helping to change the path they were on,” Gonzales says. “Those are powerful moments.” For now, Gonzales is continuing to get out on the streets when he can. He visits prisons on his own time to let his connections know how their kids are doing on the outside. He’s still meeting with kids referred to him through the court system. His Noble Youth group continues to meet every Wednesday. Some things are different. Gonzales says budget cuts will make it harder for him to reach the hardcore kids — the kids he calls his true calling. But he remains hopeful. “I’m glad that this is not coming to an end,” Gonzales told The Reader after the meeting. “I’m really looking forward to what we can do.” The South Omaha Violence Prevention and Intervention group meets the second Wednesday of each month at 11 a.m. at the South Omaha Public Library, 2808 Q St. The next meeting is April 13. For more information contact Roger Garcia atroger.garcia@ci.omaha.ne.us.