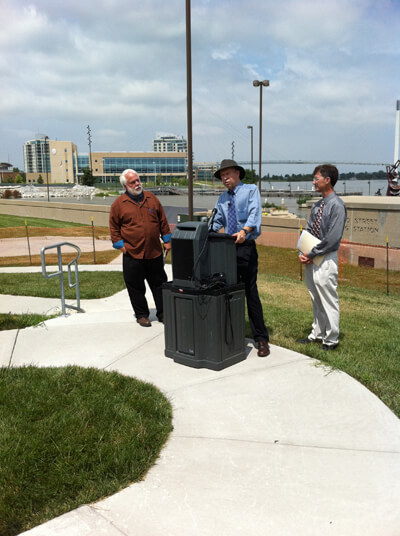 This summer has seen its fair share of drastic conditions around the country, including record flooding along the Missouri River. Overlooking its swollen banks at Omaha’s riverfront landing, one scientist has a simple explanation for the past three months of flooding. While many consider the flood man-made, Dr. James Hansen sees clear signs of carbon build-up in the atmosphere.

“We’ve had 100-year floods now a couple of times on the Missouri River recently,”said Dr. James Hansen, Director of NASA’s Goddard Institute for Space Studies, during a visit to Omaha on Tuesday. “That’s one of the expected consequences of increasing atmospheric carbon dioxide.”

According to the Federal Emergency Management Association’s (FEMA) National Flood Insurance Program, 100-year floods have a 1 percent chance of occurring in any given year.

Hansen, who is considered by many to be one of the world’s leading experts on global warming, said the Missouri river is a prime example of how global warming is affecting the earth. It fits the best science, but the numbers are complex.

“Unless you do statistics, and you see that the frequency of these events is changing,”he said.  “It’s not so easy to see that changes are occurring because the climate system has tremendous inertia.”

“The ocean is four kilometers deep, the ice sheets are two or three kilometers thick, so they don’t respond immediately as we begin to change the atmospheric composition. What that means is that we’ve only experienced about half of the warming that will be cause by the gases already in the atmosphere.”

“The full effect is going to be felt by our children and grandchildren,” he said. “And if we continue to increase the amount of CO2, the effect will be even larger.”

According to Hansen, the responsibility lies in effective policy making to combat global warming. That includes a gradual reduction in carbon emissions. Hansen proposes a rising price be placed on carbon emissions, which should be collected from the fossil fuel companies at the first sale.

Without comparable measures taken by the government, Hansen said the public can expect more of the extreme weather patterns that much of the country has experienced lately, including more severe droughts and floods in the decades ahead.