Home » News » Health and healing through culture and community 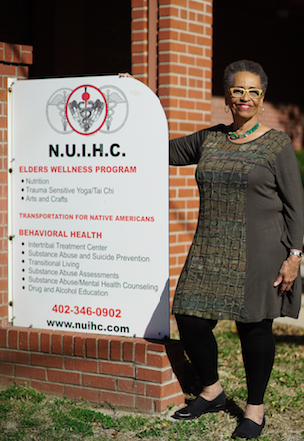 Headquartered at 2240 Landon Court on 24th Street, between Farnam and Leavenworth, the nonprofit feels the squeeze enough from encroaching development  that it plans moving to South Omaha to be closer to its Native base and to have larger facilities.

“We intend to move because we’ve outgrown this facility and we no longer fit into the demographics of this area. Gentrification is chasing us out. Our target population is no longer here and we need more space,” said Polk, longtime CEO of the agency formed in 1986.

“By moving into a larger building we’ll be able to have one floor more for the community and a second floor for programming. We’re very excited about that.”

Meanwhile, Polk and Tamyao don’t like how rising property values and rents displace residents in a long dormant, mixed-use urban area being revitalized.

But Polk is also practical enough to work with one of those gentrifying developers, Arch Icon. For the new NUIHC site, they’ve fixed on the former South Omaha Eagles Club at 24th and N. It has more than double the square footage. Adjacent to it, she wants to build 44 low-income transitional housing units to “provide secure, sober housing for a displaced community.”

Tamayo, NUIHC Youth and Family program director, said the city’s Native community once lived near downtown but long since dispersed. Transportation’s an issue but will be less so with the move.

Both women are mixed heritage like most of their clients, “There aren’t that many pure bloods,” said Tamayo, who’s Mexican and Native. Polk is African-American and Native. The agency has an all-Native board of directors except for one member. Board and staff dislike any efforts, intentional or not, that further marginalize an already nearly invisible population. Though not widely seen – the census estimates 3,400 reside here  – Natives have real lives, families, issues and needs NUIHC responds to with culturally competent programs and services.

Tamayo oversees the Soaring Over Meth and Suicide (SOMS) program that gives young people preventive tools to avoid abusing substances or doing self-harm. The mother of four brings “a lot of life experience” to the job. People close to her have committed suicide, battled drug addiction and suffered mental illness. She sees herself in the clients she serves.

“I grew up in the area. I did the gangs and the drugs and the running around. Anything positive that I can keep my kids in and the bigger support system that I can put around them is definitely a plus.”

“You have to be an enrolled member of a federally recognized tribe to be able to receive services from an IHS,” said Tamayo. “A big part of our push, especially with the Adolescent Health Project we’re part of through the Women’s Fund of Omaha, is to build bridges and fill gaps between the different services so that other organizations work better with our community.

“At our Lincoln clinic we provide healthcare services to a large population of undeserved people in Lancaster County,” Polk said. “Incidence and prevalence of chronic disease in the Native community probably puts them at greatest risk than any racial or ethnic group with diabetes, heart disease, cancer, respiratory issues. It’s horrific. It mirrors the mortality and morbidity rate of the dominant culture but the effect is more devastating because diagnosis is often in late stages.”

“When people graduate from this (treatment) program or any program in the country, they’re eligible to go to the transitional housing.”

NUIHC’s not seen an upsurge in treatment referrals since since Whiteclay, Neb. liquor stores closed, though alcohol remains a huge problem.

“The programming we do, even sex education, is working with the culture, bringing back traditional values in how to conduct yourself to have high self-esteem and self-worth for making healthy choices,” Tamayo said. “In the majority of our families, the youth do start to drink, use, smoke, whatever, by 10-11 years old.

“It’s looking at underlying issues rather than just educating them about using condoms and getting tested. We have to help them change their mindset. It’s getting them to understand what’s important and how to take care of themselves. We tell them you may not be able to control the environment you’re put in or what’s going on around you, but you still have control of the choices you make going forward  What you did yesterday doesn’t have to dictate what you do today. If you choose to go to school today, then that’s one step closer to doing what you need to be doing to better your life. We keep encouraging them.”

Two annual NUIHC events happen this month: Empowering Youth to Lead a Healthy Life: Native American Health Conference on November 10 and Hoops 4 Life 3-on-3 basketball tournament on November 11. Both are at NorthStar Foundation.

NUIHC convenes an All Nations Youth Council that has a real voice in agency matters.

“For any big push we have we get input from this community, including our youth,” she said. “We don’t want to be telling them what they need to be learning and working on if they have other things going on that need to be addressed. They discusses where we’re going with programming – if we’re hitting it or missing it.”

Last summer, participants of an NUIHC-sponsored youth group made a chaperoned road trip to Chicago and Washington D.C., where they presented cultural performances featuring traditional singing and dancing.

“A lot of our kids haven’t even been past Sioux City,” she said. “It’s giving them an opportunity to understand there’s a whole world out there and it’s very possible for them to reach and go to. They enjoyed it.

“We took them around to all the museums in D.C.  The one they enjoyed the most was the Holocaust Museum. A lot of people wondered if that was going to be too traumatic for them. But when we talked to the kids afterward, they’re so used to seeing things on the reservation, they’re so knowledgeable historically of the things that have happened to Native Americans, that this didn’t affect them as it might a lot of others.

“Trauma is just such a part of their daily life that it takes so much for them to be impacted by the experience.”

In everything NUIHC does, great emphasis is placed on observing Native traditions. It even occasionally hosts funeral services, most recently for Zachary Bearheels, the mentally ill man tasered and punched multiple times by Omaha police last June before dying in custody.

Every effort’s made to respect client requests.

“If you want to go to the sweat lodge or have a ceremony with a medicine man or go to a pow-wow, you can do that.”

“Definitely, our focus is healthcare, but the connection between cultural activities and being able to identify who you are with how those things affect your health has come more about,” Tamayo said. “We’re able to do that to address the health issues we’re working with.

NUIHC works with OPS and other stakeholders on cultural sensitivity to Native mobility and family dynamics that find youth moving from place to place.

“That’s very important because we look at that as a protective factor so kids can feel good about who they are,” said Polk.

Tamayo appreciates the autonomy she’s given.

“Donna (Polk) has faith in me that I understand our families’ needs and what services to give them. I have full permission. It’s like open-door mentoring. We have to be really connected and visible in the community. It’s a lot of hours.

“I’ve been in the community my whole life on and off and I know most of these families on an individual level, so being able to reach out and do what I need to do to help them is a plus.”

That help may include informal counseling-coaching to navigate the complexities of life off the Rez.

“We partner with and reach out to reservations because so many of our families migrate back and forth between urban settings and reservations. We want them to feel like they’re getting help with things wherever they go,” Tamayo said.

“They feel like they’re so far away from home and they don’t have a connection here,” Polk said. “We help get them more involved in the community so they can keep that cultural connection they may be missing in an urban setting.”

Polk feels NUIHC is sometimes out-of-sight, out-of-mind. Its $2.3 million budget depends on the vagaries of federal and foundation funds and grants. The low-key, low-profile agency isn’t exactly a household name.

“I don’t lament the fact the general public may not know us or what we do here because the people who need our services know we’re here. That’s what’s important to me. Nationally, people know we’re here. We get clients from as far away as Alaska who come for treatment.”

She’s gearing up to raise millions to acquire and renovate the South Omaha Eagles building. Plans to build the Eagle Heights recovery community are contingent on TIF financing and other funding sources.

“Our mission is to create a small community for the original inhabitants of this land. Almost every group has a community people identify with. We believe we can blend in with South Omaha. It offers the land, the vibrancy and a welcoming spirit. We will be able to increase our ability to elevate the health status of urban Indians by offering additional services, including Intensive outpatient, parenting, caregiver training-assistance, community health and outreach.”