“I love that I took economics, but it wasn’t on purpose,” explained the self-effacing Ho-Chunk CEO Lance Morgan, “It just had the fewest number of requirements after the basics.”

“Interestingly, economics drives so much, especially when it comes to Indian country. You have to understand the bigger picture of what’s going on. In Indian country, the law has been a big restrictive influence, and so the combination has been far better than I thought.”

That combination includes a Harvard law degree and it’s helped Morgan re-write the rules for Nebraska’s Winnebago tribe. The company he started in 1994 out of his apartment on the reservation, Ho-Chunk Inc., will cross the cumulative $3 billion revenue mark this year, making it the 2nd largest employer in Northeast Nebraska. That economic engine has helped the Winnebago tribe go from less than a dozen college graduates and a 60 percent unemployment rate to more than 100 college graduates and a 10 percent unemployment rate, employing dozens and dozens of Native Americans and transforming the Winnebago reservation.

Getting there was a mix of understanding how to get around the trap of Indian law while building economic power to protect and grow on little successes. The son of a roofer credits learning from failures as a key ingredient.

From Shingles to Sheepskin

“My parents are from Winnebago, Nebraska. My dad’s a farmer. That means white in Winnebago,” joked Morgan. “My mother is a Winnebago tribal member.”

Born at the U.S. Naval Hospital in San Diego, Morgan’s dad served in Vietnam before settling in Omaha to work construction.

“Before that, he was a farmer, so I always tell people he was a strong believer in child labor,” cracked Morgan who from an early age helped with the family business.

“My goal was to go to Harvard undergrad, but I had an incomplete application. I only applied to Harvard. Stupidity meets overconfidence. They had sent me a letter saying I needed another recommendation. I never saw it. I had no back-up plan.”

“I immediately applied to University of Nebraska, but my family didn’t have any money. I graduated from high school on Saturday. On Monday, I’m in the United States Army Reserves.”

While that helped cut tuition in half, the tribe and Pell grants helped and he made up the difference roofing in the summer.

“Then I applied to Harvard and five other schools. I got smarter.”

While mostly interested in an MBA, that required employment, so he applied to law school and was accepted. He worked in the family business to the end.

“That was my last house that I roofed.”

But his building days were just beginning. 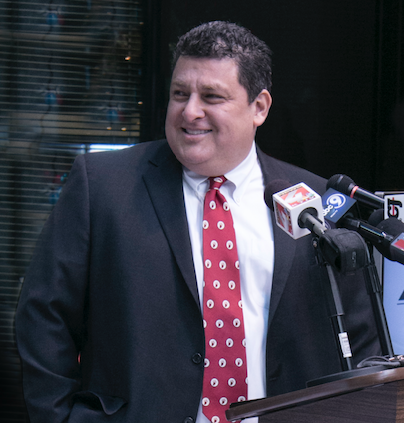 “I was going to be a corporate lawyer in New York, and then I got a knock on my door from a guy who said ‘You want to do corporate Indian law.’ I didn’t think there was a real job there at the time, but casinos had started going in the late ‘80s and early ‘90s. I graduated from law school in ’93, and there was a rich tribe in Minnesota that told the law firm ‘You better hire an Indian.'”

While in Minneapolis he took on his own tribe as a client in a dispute with the management company at Winnevegas, the Winnebago tribe’s casino. The settlement from that lawsuit helped launch what would become Ho-Chunk, Inc.

Despite the start-up capital, he was still working against a very established history that plagues almost every tribe in the United States.

“In the beginning, the tribes didn’t have many lawyers,” explained Morgan. “We had a lot of land, and we had a lot of resources. There was a lot of greed with people wanting those assets, so that’s a bad combination in America — no political power, no economic power, no legal know-how and rich with assets.

“We were systematically exploited, and all the rationalizations were usually done legally. There aren’t that many laws regarding Native Americans or tribes. It’s mostly been done in the courts. It was a systematic approach that built on itself, and so the law is built on precedents.

“We find ourselves 150 years later in a box, in a legal box, and all the rationale for it really doesn’t make any sense in a modern context.”

Morgan expounds on the idea in a law review article for Arizona State University, where he teaches a summer course. Titled “The Rise of Tribes and the Fall of Federal Indian Law,” it explores how Morgan first used sovereign law to build economic power and find new opportunities.

“If I had to pick one reason we’re poor, it’s because the government took our land in a trust status. It was designed to help us, but it meant no taxes. If you have no taxes, you can’t issue bonds, so you can’t build schools. You can’t pay for your police department. You can’t build roads. You can’t do anything.

“Interestingly, only 15% of [native] farmland is farmed by natives, 85% is farmed by non-Indians, because they can get access to the capital. If you go to ranching, it’s exactly the opposite – 85% of native ranchland is ranched by Indians, but only 15% is by non-Indians — and that’s because cattle are collateral.

“Indians are perfectly capable of functioning in a business environment, but if the system is so twisted against you, you can’t do anything about it. Not only could we not farm, we also couldn’t get a mortgage on a home. You can’t get a mortgage; you don’t pass on any wealth. Generations of renters are squatters.

“There was no intergenerational wealth transfer, and that meant no capital for entrepreneurism. The system slowly shrunk us down to, basically, trying to get a menial job just to get by.”

So Morgan had to leave the reservation to start building a business. He started Ho-Chunk with the intention of developing it into a nice real estate development company, building some of the first hotels by the Omaha airport. But as Council Bluffs casinos ultimately reduced the tribe’s casino revenues by 90 percent, he realized “it wouldn’t change the community at scale.”

So he took the tribe’s exemption from federal taxes to enact tribal laws and leverage a price advantage by mixing ethanol gasoline to sell and then manufacturing cigarettes. He calls that old technology now, because it’s what he did next that really built Ho-Chunk into what it is today.

“After about five years of that, we shifted,” explained Morgan. “We started a construction company, we bought a home manufacturing company and started a government contracting company.”

Government contracting represents over half the company’s revenues, with work across the globe, including hotspots like Afghanistan and Iraq. Today Ho-Chunk has six separate business units that also include the Pony Express convenience stores and Ho-Chunk Farms. It’s what he was able to do with his community, and building the right team, that made it all possible.

“We have to find people who are hungry and who are scrappers. We’ve never hired anybody with a perfect resume. We hire somebody who looks like they’re poised to do greatness. Especially with Native Americans, you’re not going to find Native Americans moving up the corporate ladder in white America, but you might find a Native American who’s stuck in middle management somewhere who’s pissed about it, and who’s pretty smart, but is not going to go very high.

“If we can find those types of people and give them an opportunity and we all work together, then you see this excellence rise up. Our management team is primarily Native American. Four of our top five executives are, and not one of them was perfect with a resume when they started. They are people who were looking for an opportunity and who do what it takes to be successful.”

That team leads an internship program that not only helps fund college educations, but prepares the company for its next employees and middle managers, what Morgan calls a “perpetual cycle of education.”

Learning and Giving Back 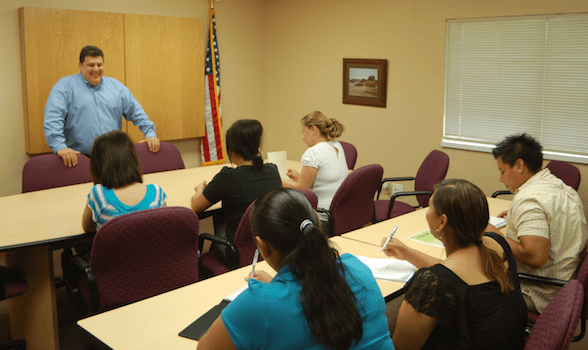 A tribal company was hardly a proven concept.

“The thing about a tribal company is nobody cares if you’re successful or not. They care is their life better? Do I have a better job? Do I have a house? Do I have something to eat? Is my family better off? Is my life better?”

Morgan wasn’t the first to try taking the tribe’s revenues from gambling to build a business, but he was the first to nail down a working structure that has paid big dividends for the Winnebago.

“When Ho-Chunk Inc. was started, we set up a system of rules that govern the interaction between the corporation and the tribe.  We actually won the Harvard Honoring Nations Award for this structure, and all I did was go around and ask everybody why we failed before.”

Ho-Chunk has a 5-member board of directors separate from the tribe, but two members sit on both. It runs its own accounting and human resources systems, but provides the tribe with an audit and a budget. It gets to re-invest its profits, but also pays the tribe a dividend.

That dividend launched the Ho-Chunk Community Development Corporation, which has raised an additional $50 million for infrastructure, buildings and program on the reservation.

“What we’re trying to do is bake a bigger cake in our community so that everybody gets a bigger piece,” said Morgan. “Tribes have been zero sum games for a long time. The government pumps in a little bit of money and then you fight over it. That system was always going to fail, but as we grow in population it’s becoming more and more desperate.

“By taking control of our destiny, by creating our economy, by creating a middle class, we’ve been able to change our community, big time.”