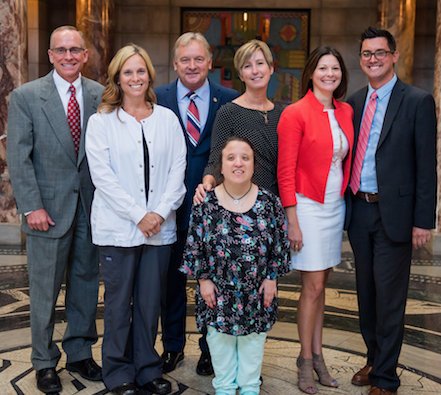 State Sen. Bob Krist of Omaha knows the steep climb ahead in his 2018 gubernatorial challenge. The moderate has left the Republican Party to run as an Independent against Nebraska’s deep-pocketed Trumpian incumbent, Pete Ricketts, in this Red state.

The GOP’s long viewed the vote-his-own-mind Krist as a rogue. The U.S. Air Force veteran entered the Unicameral as an appointee. He twice won election to his District 10 seat. Not towing the conservative line saw him clash with Gov. Dave Heineman over prenatal care for illegal immigrants. Krist advocates state juvenile justice and adult corrections reforms and takes Gov. Ricketts to task for inaction on these issues.

The state GOP crucified Krist for leaving the party and he fully expects an attack campaign. But bolting made sense for someone variously described as “passionate,” “fiery” “nonconformist,” “bulldog,” “hurricane,” “contrarian” and “vocal critic.”

“Yeah, I do own all those very easily,” said Krist, who’s married with two adult children. “I’ve been accused of running with my heart on my sleeve and I do sometimes, but still I remember who I represent. For me, staying on script, staying very to the letter is tough. It’s not the way I do business.”

He ascribed his maverick ways to “a family upbringing that taught me to question and rationalize through issues” and being “educated by the Jesuits at Creighton Prep.”

“Interestingly enough. my time in the military I was rewarded for thinking outside the box and solving problems. We used to say in Air Power, if you want to succeed you make a plan and that plan is something from which to deviate. So, it’s always been in my nature to look for the right answers. It’s never been what someone is going to tell me to do or what the party line or the dictate should be.”

Krist, 60, retired as a lieutenant colonel in 2000. He feels his military experience prepared him to lead.

“My last few years in the military my job culminated in being chief of plans and programs for the largest wing in Air Combat Command. A lot of detail, a lot of logistics. Being able to compartmentalize and working through problems and finding solutions.”

This mission-driven approach carried over into the Nebraska Unicameral.

“I like to define a problem and find a pathway to success. Sometimes you have to develop an overall strategic approach concerning your task and solving the problem to get mission success. Sometimes along the way you just have to stop, regroup and tactically change your direction.”

Working across the aisle is a must in his eyes.

“Understanding how people think and trying to build consensus is an art form and in order to get to that point you really have to understand the legislative process.

Learning when to speak up, when not to. When to file a motion. When to do those kinds of things.”

“It’s not allowing us to succeed and that’s where I believe independent leadership is so needed. I believe people honestly want a change. If you look at the last few election cycles, I think it’s proven people want to cast their vote for something that counts.”

Krist wants to be evaluated on his record. he said, including “hundreds of individual bills and more I’ve spoken and voted on – you can measure, weigh and judge who I am and what I’ve done by my body of work.”

Besides his wife Peggy, Krist said he sought feedback to his governor’s run from “a pretty special guy I rely on who happens to be a Catholic priest.” His clergy counsel reminded him even if he should lose, he might spark dialogue about issues important to Nebraskans. Then there’s the possibility he could win, too.

“My friend ended by saying, ‘So, what have you got to lose?’ That was instrumental in solidifying my decision to run. The pathway to success for me is not relying on the Republican Party, which has been trying to kick me out since I got there, or the Democratic Party (whose pro-life stance is a non-starter for him).”

“The two party system has made it very difficult for an Independent to run and succeed in this state,” he said referring to a statute requiring 5,000 signatures. “But if the climate has ever been right. probably this is it. My biggest concern right now is raising enough money to make sure people can hear what I have to say so they can make a valid decision at the polls.

“We’ll talk to Nebraskans east to west, north to south, and see if we can’t get the message out there.”

The experienced pilot will fly himself to outstate stops.

A topic sure to surface is Nebraska Department of Correctional Services issues with officers’ overtime pay, inmate overcrowding. violent incidents and prisoner escapes.

“We have a director (Ricketts appointee Scott Frakes) saying it’s just going to take time. Well, we don’t have any more time, we need to do something about it. I don’t know any way to solve the problem than to change the leadership and declare an emergency. We’ve done everything we can within the system and we’re going in the wrong direction. We have a director who needs to resolve the issues.

“Overtime’s going up incredibly, exponentially. Mandatory overtime destroys lives and continuity because people quit. We have to keep people employed. We have to make it a profession with a merit system. I’m asking the director to negotiate again with our corrections officers. The safety of the officers and the inmates is in question. There’ve been people killed and hurt very badly, on both sides, and we know now almost every one of those issues involved someone under the influence of something.”

Krist said if the state can’t fix the mess, then a federal ACLU suit could compel the U.S. Department of Justice to step in and determine what inmates get released. A new corrections facility could be mandated.

“The last thing the people of Nebraska want is another $400 million penal institution locking people up.”

“I became really involved with this issue serving on the committee that started out just looking at Nikko Jenkins (committed spree killings after early release). Preventive action should have happened when he was bouncing from foster home to foster home and coming to school with a knife and a gun. At some point, you’ve got to break the chain, because if you don’t there’s going to be a tragedy. That’s why I’ve been so active in juvenile justice. We have cut detention of kids by 50 percent. We found alternatives to detention that work.

“The more testimony we heard, the more the onion was peeled back, we decided we needed to expand the investigation into all of corrections. There were too many things happening. The problem is out of control and something dramatic is going to have to happen or we’re going to have another incident, another riot, another person killed.”

“We had a group of stakeholders around the table – senators, law enforcement officers, the attorney general, public defenders, judges – that worked very hard in conjunction with the Justice Center of the Council of State Governments trying to find solutions and looking forward to the kinds of changes that need to be made. When Heineman left office and Ricketts came in, there was a lack of attention to detail, lack of focus and no fidelity to where we were going.

“At a time when we most needed input from various levels, Ricketts disbanded the group, saying, ‘We don’t need you, we’ll just handle all this stuff internally.’ Well, he hasn’t done a very good job of that.”

“Business people don’t believe giving away tax base is the way to grow our economy – and you can’t keep giving things away and expect you’re going to build an economy. Look at what happened with Conagra. We gave them everything we could and as soon as that enticement was over, they left.

“Tax Incremental Financing is sometimes used effectively and sometimes misused. When you give away TIF and taxes, it affects the public education system. There are plenty of cities that have given their tax base away and seen their school districts go down.”

He and Rickets both champion property tax relief.

“As a state we’ve made decisions that have made us almost 100 percent reliant on property taxes to fund critical services, education. et cetera. We’ve got to stop that,” Krist said. “We’ve also got to stop the escalation of the property tax assessment.”

He said he advocates “controlling spending at the local level, controlling the levy process and most importantly the assessment process,” adding, “I believe by looking at income tzx, property tax, fees for services and corporate tax loopholes we can come to a consensus that’s good for the state. We have to.”

“We’re close to looking just like Kansas,” he said, referring to that state’s epic budget crisis following failed economic reforms, “and that’s not a model anybody wants to emulate.”

Is he ready for the rigors of an uphill race?

“Physically, I’m ready for it. Mentally, I’ve had great training being in state government 10 years and knowing the state and being involved in all the standing committees. What am I going to do different? I’m going to listen to people about what they think isn’t working. We’re going to have those discussions

“I know there are some long days ahead. I get it, I’m up for it. I just want people to give me a chance to represent them. I promise there will be results.” 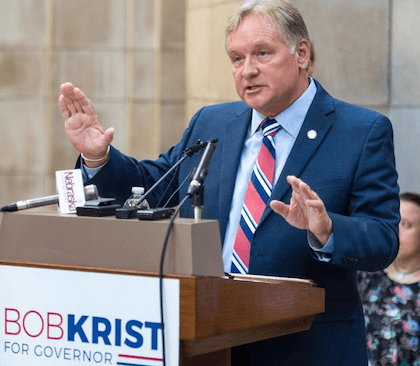