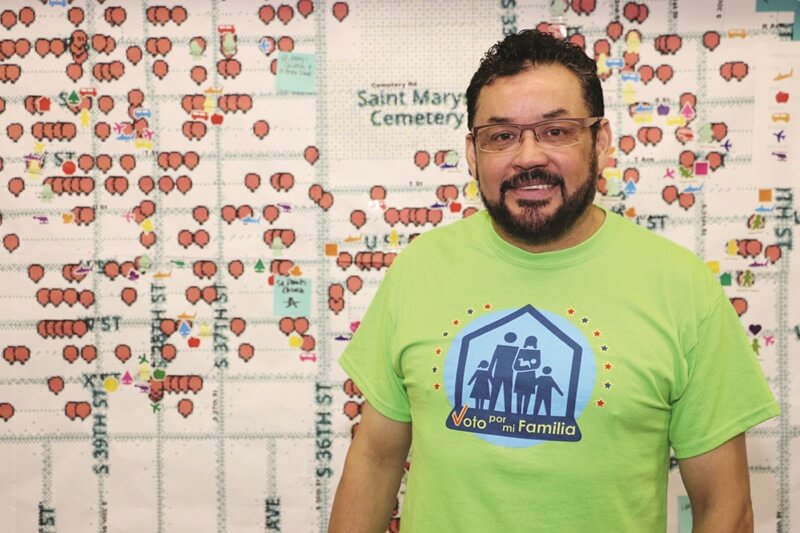 The Heartland Workers Center’s theme for their get-out-the-vote campaign is “I Vote for My Family.”

Sergio Sosa, Executive Director for the Heartland Workers Center, said they chose the theme because many Latinos have strong familial ties or ties to the small cities they are from.

“Every vote counts and every vote will somehow affect people’s families and the issues they care the most about. People my age who are voting are teaching our kids, the next generation of voters, leaders and political officials, that we are living in this country and we need be part of the political system as well and participate in it,” said Sosa.

He explained there are three reasons the Latino vote is so important. The first is that Latinos care about their families. Secondly, the Latino population has been increasing across the U.S. But Sosa said having numbers doesn’t mean anything if Latinos don’t get into public life and civic participation. He said all naturalized citizens need to vote.

The goal of the “I Vote for My Family” campaign is to get Latinos to the polls. Sosa said HWC is engaging themselves in this process by giving out educational materials, talking to Latinos about how the political system works and training other organizations how to canvass and use phone banks.

The HWC is going door-to-door canvassing neighborhoods with a focus on South Omaha’s 4 and surrounding areas. Though many of these residents are eligible to vote, turnout is usually low both here and nationally with the Latino vote.

Sosa explained they’re registering people to vote, bringing them training materials, offering them candidate profiles to educate them, talking to them about deadlines and teaching them the election goes beyond voting for president.

Important gains have been made in recent elections. Ward 4, for example, has increased its voter participation by 26% over 2008. But Sosa said there’s still a lot of work to do. “We’ve got to get people to the polls, not just teach them how the political system works, but also help them understand the culture of civic engagement goes beyond voting. Voting is the first step to keep fighting for the issues you are concerned about the most.”

He said that being part of schools and attending community meetings are also important.

“There are definitely local races people need to watch as well. We follow up with every registrant we have. We ask them what time they will vote on Election Day and then call to remind them in advance,” Sosa said.

“Among our leaders in the community, they were able to raise $3,000 to support our campaign. We also applied for grants to assist as well. Between the funds raised and our volunteers, we have maximized our efforts.

HWC extends its efforts to additional Nebraska cities, including Schuyler where more than 67% of the population is Latino. Schuyler also has two Latinos running for office: one for the school board and one for the city council.

“Through our efforts, Latinos have been learning how important it is to be protagonists of their own lives and are taking a step up to run for positions,” he said.

Heartland Workers Center is developing leaders in each precinct so that they won’t have to run campaigns alone in future elections. He said they are working with a coalition of 14 religious institutions and nonprofits. They are also training the Latino Center for the Midlands and showing them what they can do themselves during the next election.

“We are teaching the 400 employees at OneWorld why civic engagement is so important. We have gone to churches and taught the pastors and leaders what they need to do as well. This work is easier if all of us engage ourselves collectively in efforts for the next election,” he said.

What are the big issues on the minds of Latinos this election year? Sosa said healthcare is tops because a lot of Latinos don’t have health insurance or they have a plan from the Healthcare Marketplace and they are worried about whether they’ll be able to keep it.

Immigration is the other major issue of concern because people want to keep their families united. Sosa said Latino voters are worried there could be a separation of families.

Sosa recognizes that voter participation is lower in the Latino community. He said that one of the reasons is because they came to the United States thinking it would be like their country, where voting all too often goes hand in hand with election corruption. Another reason is because Latinos may believe their vote is not related to the issues they care about or because they believe nothing is going to change.

“In our native countries, we may end up voting because a politician came to our house and gave us a basket of food or soccer balls or offered to fix our house. They buy our votes,” he said.

Many Latinos are used to multiple political parties as well. In Sosa’s own Guatemala, there were 21 political parties participating in the last election, even in the presidential race. This can make any election seem daunting to new voters here.

One practical reason Latinos don’t vote has to do with a lack of time to get to the polls.

“People need to work so hard that many times they have two or three jobs. Sometimes they don’t know their schedules,” said Sosa.

The language barrier is also a problem. Sosa explained that before the Heartland Workers Center started their campaigns, there wasn’t much information available in Spanish. So the HWC built an alliance with the Douglas County Election Commission. They are sending bilingual people there to train them to become poll workers during the election.

“A new voter will come and he or she can speak with someone in their own language. That really helps,” Sosa said.

Sosa said he believes HWC’s efforts are working, “The number of early voters we have been collecting has been increasing as well as the number of voter registration forms.”