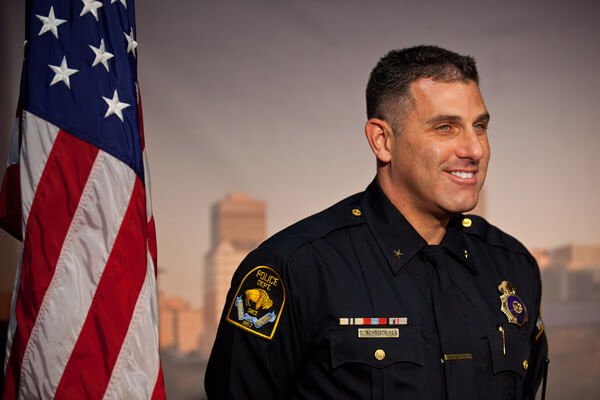 First, a primer on how to pronounce “Schmaderer,” the new police chief’s last name: “SHMA’ der.” Rhymes with water. “Some of our relatives actually dropped the last ‘er,’” he explained during an hour-long interview with The Reader. Water is an apt metaphor for Todd Schmaderer’s thoughtful, soft-spoken demeanor. Still waters run deep and so does Omaha’s 40-year old police chief.

Schmaderer has a diverse skill set. He is a law enforcement practitioner with 16 years experience on the force in numerous supervisory positions and departments. He has a Bachelors degree in criminology from UNO and earned a Masters degree online from the University of Cincinnati. He taught college courses at ITT Tech and supervised Omaha’s police academy for three years during the city’s busiest hiring period. Schmaderer supervised five classes in those three years, training 200 recruits — one quarter of the current force of 800 uniform officers.

As police chief, he is also a chief executive officer overseeing 1,000 employees and a $118 million budget. Schmaderer was a business major in college before switching to criminal justice and currently serves on the board of the Police Federal Credit Union. When asked why he was drawn to police work, he said “You get a feeling after answering a call if you made a difference in a person’s life. That feeling is a nice thing to have.”

Two of the young officers he trained described why they believe Schmaderer is the right man for Omaha. “What excites me is he cares,” 26-year old Sean Quinlan said. “He truly cares about the city and the citizens. He wants to create an atmosphere of trust between citizens and the police. It starts at the top. And he listens. He ‘gets it’ that his job is to listen.”

Dan Wootton, also 26, was twice a student of Schmaderer’s, first in college and then at the police academy. “He’s highly intelligent. He’s fair, impartial, and reasonable. He thinks things through. We had a meet-and-greet with the new chief for just the officers. After he spoke, you knew that if you screw up, you’re going to get punished. And if you do the right thing, you’ll get credit.”

Just three weeks into his tenure, Schmaderer has been busy meeting with citizens and neighborhood groups. Last Saturday, he spent the morning at North High attending a “Raise The Vote” summit hosted by the Empowerment Network. After a powerpoint presentation by network president Willie Barney on the decrease in gun violence and homicides over the past five years, Schmaderer made a brief speech to the crowd.

He drew attention to the fatigue on his face. The night before there were five shootings in north Omaha, including one fatality. Schmaderer acknowledged that there is more work to be done to decrease gun violence, but he encouraged the audience not to lose sight of the big picture. “Omaha is a wonderful place to live. If you look at Omaha — we’re about 450,000 people — and compare us to any other city our size in the country, you’ll want to live here above all those other cities,” he said.

He also spoke about his vision for the future of the department. “My philosophy is a community policing approach coupled with a neighborhood problem solving tactic. What I mean by that is we’re going to work with the community, go neighborhood by neighborhood, block by block, to identify the problems because every neighborhood has a different set of problems.”

After the speech, Schmaderer told The Reader, “I know the root cause of crime is poverty. We have to balance a law enforcement response with programs that address the underlying causes if we’re going to be successful at reducing crime.”

In conversation, Schmaderer candidly addressed recent police controversies in Omaha. When asked about the use of excessive force, highlighted by the recent surveillance images of Robert Wagner, he declined to talk about any individual case, but made this statement. “There is no place for excessive force in the organization I want to run. I expect a professional response to calls for service. I do believe we have a professional staff. However, it’s 800 officers. When wrongdoing does occur, we’ll address it sharply and appropriately.”

Schmaderer was aware of allegations in the recent gang assessment that officers were transporting gang members to rival territories and dropping them off. He said he had addressed the officers twice since taking office and would not tolerate that kind of conduct from them.

When asked about the lack of a police auditor, Schmaderer said he believes civilian oversight of the police promotes trust and can be accomplished by either a police auditor or a civilian review board. Asked about diversity, he said the police department should reflect the demographics of the community it serves and he plans to promote diversity in the ranks.

Even mundane things like redesigning the police department website are on the new chief’s radar. Members of the public with web design experience are welcome to help with that project. Citizens or groups who want to meet with the police chief can contact OpdPublicInformation@ci.omaha.ne.us.