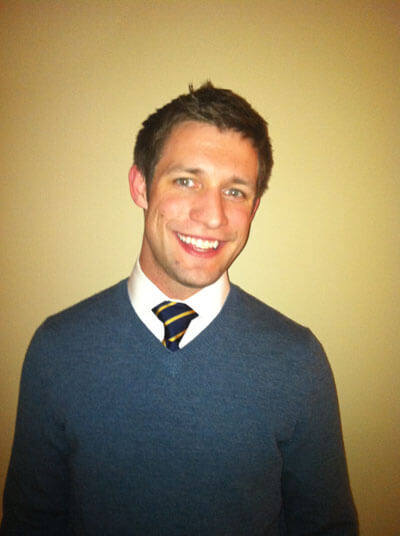 Adam Morfeld walks briskly into a hip coffee shop in downtown Lincoln a few blocks from the Nebraska State Capitol building. He skips the baristas and slides into a seat at a window table. It’s the first day of 2012 and while the rest of the cafe’s patrons stare half-heartedly into laptop screens and ceramic coffee mugs, Morfeld is radiating with energy.

“I’ve already been here once this morning,” he says, taking a sip from his Styrofoam cup. “I was here about an hour ago and left and came back.”

Indeed, being one step ahead is what Morfeld does best. At 26, the Lincoln native has already completed his undergrad in political science and economics, rose to chair the UNL Daily Nebraskan publication board and is in his last semester in the University of Nebraska’s law school.

Not to mention he’s the founder and executive director of the non-partisan, non-profit public interest group Nebraskans for Civic Reform, an organization dedicated to getting historically disadvantaged and disengaged populations involved in civic activities. He began the organization in 2008, after a successful term on UNL’s student government in which he helped increase voter turnout from the second lowest in the county to the second highest.

“First, we moved the location to a more convenient location. It was at the Debaney area which is kind of way off campus to the [student] union,” he says. “We also had the university send out a mass e-mail to students with a voter registration card or a absentee ballot request form attached informing them three to four weeks before the election to get registered.”

It was the last implementation that set off the light bulb for Morfeld. Realizing the issues regarding voter turnout were actually systemic in nature, he began thinking about how the election process and all its components, including unnecessary registration deadlines, affected students in particular.

“Because students move around a lot and oftentimes are first time voters, they don’t think to reregister or forget to register in time,” he says. “A lot of times what happens is that students don’t remember until it’s too late, so they usually just stay away from polls.”

He decided he’d try his theory on a larger level and with just a few other young professionals to join him, started NCR.

With all that under his belt, it shouldn’t come as a surprise that Morfeld is ready for the hot seat. Lately, he’s been gearing up for the legislative session this month where he’ll hear the fate of Senator Charlie Janssen’s Legislative Bill 239, also known as the Voter ID Bill. Morfeld, who is very much against the proposal, is anxious for the floor to open.

“It’s twelfth on the board, so it will be heard probably the first two weeks of the session,” Morfeld says.

The bill proposes that every voter present a state-issued ID – administered at the DMV – in order to cast a ballot. But Morfeld argues some Nebraskans move and don’t update their information, making them ineligible to vote under the new law. This causes difficulties for highly mobile demographics.

“The problem with LB239 is that it misses about 10 to 15 percent of Nebraskans,” he says. “Most of them being the seniors, the low-income and the youth.”

Although it’s been a huge focus lately, Morfeld says he and the Nebraskans for Civic Reform aren’t just concerned about this one bill, but the overall systemic issues within Nebraska’s election process. And, according to Morfeld, issues are plentiful.

“For starters, Nebraska doesn’t have uniform election standards or guidelines other than the state statute, which is very unusual,” he says. “Most states all around us have these which are produced by the Secretary of State’s office to make sure there’s consistent implementation of the Election Act.”

Changing an entire state’s election process isn’t exactly a cakewalk, and despite Morfeld’s enthusiasm and experience – which includes changing UNL’s student election- day process – he knows he’s up against some heavy-duty politics.

“We’ve been pushing for uniform election standards and practices for about three years now,” he says. “We actually had a bill make it to the floor, but the Secretary of State doesn’t like to be told what to do. “

As it is now, the Governor appoints the election commissioner for larger counties such as Sarpy, Lancaster and Douglas, which have their own professional staffs and election guides. Smaller counties, however, have neither; so when various situations arise, it may be handled differently in each county.

“There’s not a lot of areas, but there are some gray areas, particularly involving provisional ballots and recount procedures, that lead to similarly situated voters being treated differently,” he says. “And those are equal protection violations. Those are violations of the constitution.”

Morfeld’s enthusiasm for public interest also led him to start another initiative with NCR –: civic education. His organization works with schools to offer supplemental programs aimed at educating youth about their government and the world around them. Students engage in civic discourse and participate in service learning projects, as well as volunteer to work the polls on election day. Although these programs are still in the pilot phase, Morfeld has received positive responses from local areas, including the Winnebago Tribe.

“What comes through immediately when you meet Adam is how passionate and energetic he is about the issues he’s involved with,” says Becky Gould, executive director of Nebraska Appleseed, an organization that assists with the formation of public interest non-profits. “In Nebraska, there haven’t been too many advocates focusing on our voting system’s structure. It is impressive to interact with a young person with such drive and focus and be able to translate that into productivity.”

And Morfeld plans to continue that productivity. Upon completing his law degree, he doesn’t intend to join a law firm, but will instead use his education to continue to take on more public policy issues affecting Nebraskans.

With such civic engagement and advocacy, one has to wonder: does Adam Morfeld intend to run for office in the foreseeable future?

“It’s something that really does interest me,” he says with a smile. “But I’m focused on other objectives right now.”

Yes, right now he’s got quite enough to keep him busy.