Hundreds of voters paused their Fourth of July festivities to stand in long lines for free barbeque and to hear from Democratic presidential candidate and U.S. Senator Kamala Harris (Calif.). Decked out in red, white, blue, and “Kamala For the People” t-shirts, supporters gathered around 6:30 p.m. at Rivers Edge Pavilion in Council Bluffs, Iowa. Democratic groups from counties all over Iowa were represented and one woman held a sign that said, “Huskers love you too,” for Nebraskans just across the river.

After a strong debate performance earlier in the week vaulted her to the top tier of candidates by taking a bite out of former Vice President Joe Biden’s lead, could she motivate a small Midwest crowd on a hot, holiday, far from the stage of live national television? 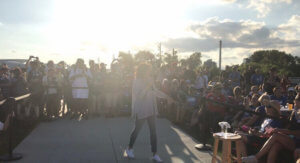 Literally surrounded by supporters, Harris began her speech saying, “I fully intend to win this thing.” She spoke for about 40 minutes with the bright, July sun and the cityscape of downtown Omaha behind her. In the spirit of the holiday, she started by reflecting on the ideals the United States was founded on.  “That’s what I say we think about when we watch those fireworks tonight, and we see that light up the sky,” she told those listening, “Let’s remember we are lighting up this country right now.”

Along with her patriotic message, she reassured the crowd about the current state of the country saying, “Our democracy is being tested, there is no question. If you think about it like a natural disaster hitting the home, yes some of the shingles are falling off, but we are still standing.”

After stating her faith in the checks and balances system in the U.S., including calling the “free press” the “fourth leg” of our table of governance, Harris began listing her concerns over the current administration. She noted that to her, President Trump’s slogan, “Make America Great Again,” sounds like a longing to go back. Harris questioned if he is suggesting America goes back to a time before the Civil Rights Act or Roe v. Wade. “Rather than going back, it’s time to write the next chapter,” she told the cheering crowd.

She then accused President Trump of being a predator and taking predatory actions when making decisions concerning vulnerable Americans, saying his policies have caused farmers to go bankrupt and more factories in the midwest to close than open.

She emphasized that as a prosecutor she knows how to deal with predators, having fought pharmaceutical companies, big banks and transnational crime syndicates as a two-term Attorney General in California, second only in size to the U.S. Department of Justice.

She spoke about her plans to help middle class Americans, specifically her proposed tax cuts for the middle class that she said has been heralded by economists as the most significant tax cut in the U.S. in generations.

“For families that are making less than $100,000 a year, you will get a tax credit that you can collect at up to $500 a month,” she went on, “which will be all the difference between being able to get through the month with dignity and stability or not.”

Harris also laid out ideas to help teachers with the first federal investment towards closing the teacher pay gap. She yelled, “In our America, teachers are paid their value!”

She passionately listed the amounts women make to a man’s dollar — 80¢ for white women, 61¢ for black women, 53¢ for hispanic women, 58¢ for native women — and simply stated in a deadpan voice, “Kind of done with the subject. Time to get this right.” Rather than require women to prove they’re not being paid equally, Harris wants to require corporations to prove they have closed the gender pay gap or face a fine if not.

Harris also addressed  gun safety in America. If elected, she will give Congress 100 days to propose a reasonable gun safety bill, and if they fail, she will take executive action to ensure stricter safety measures are put in place. She also plans to prioritize healthcare and supports a Medicare for all plan.

She views climate change as a crisis that needs immediate attention. “And instead of having a president of the United States who is pushing science fiction instead of science fact, let’s come to terms with the fact that this is one of the most existential threats facing our species.”

Harris was asked how she will deal with Senate Majority Leader Mitch McConnell and the divided Congress. She responded by urging everyone to remember the importance of Democrats working to win both the presidency and the Senate back in 2020. Although she plans to work across party lines, she also said that if a compromise cannot be reached, she is not afraid to  consider abolishing the filibuster.

She explained her reasoning for running in such a crowded field of candidates by recalling her now deceased mother and how she was raised in a household active in the civil rights movement. “If you ever come home complaining about anything, our mother would look at you, sometimes with a hand on her hip, and with a very straight face she would ask, ‘what are you going to do about it?’” she explained. “So I decided to run for president of the United States.”

She stayed for selfies and introductions as the crowd thronged around her, holiday and heat both forgotten. 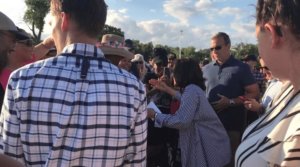