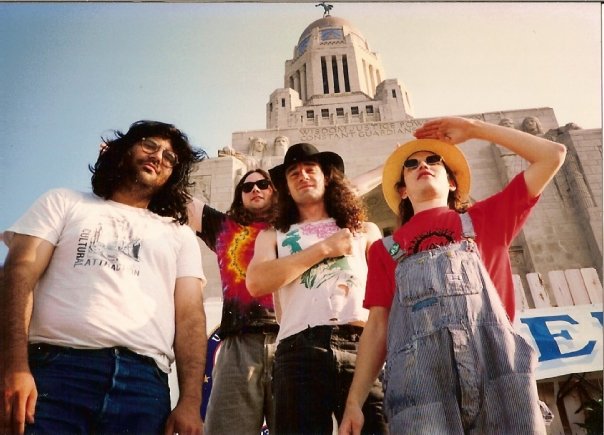 Our story begins with words of advice received by a 25-year-old Mike Tulis some time at the dawn of the 1990s from his bandmate, Kevin McClay. Young musicians and would-be rock stars, pay attention:

“McClay told me, ‘Tulis, I’ve been in a lot of bands, and the first rule of being in a band is that bands break up, and if you’re okay with that, you’ll do all right with this.'” Tulis paused to take a drink from his PBR across the table at The Brothers Lounge, then added, “He was right. The most important thing to know about being in a band is that they don’t last forever.”

Tulis should know. Few people in the Omaha music scene are as well-known or well-respected as Mike Tulis, a rock bassist and guitarist who’s been playing in bands since the dawn of Omaha’s first golden age of indie rock, circa 1993. But maybe more than a musician, Tulis is a music scene staple, a fan you can count on seeing at all the best rock shows, whether one of his bands is playing or not.

It seems only fitting that on the occasion of his 50th birthday and 25th year of playing in bands — “celebrating the alchemy of silver and gold,” as he put it — that Tulis’ first band, Cultural Attraction, is getting back together for one night only at O’Leaver’s June 11.

Tulis first met Cultural Attraction guitarist/vocalist Milan Seth his senior year in high school in O’Fallon, Illinois. The two went on to attend the University of Illinois together.

After graduation, Seth moved to Omaha and formed Cultural Attraction with the aforementioned wise guitarist Kevin McClay, conga/drummer/vocalist John Riley and mountain dulcimer player Alex Thomas, while Tulis moved to Lawrence, Kansas, to attend grad school. Afterward, he moved to Sioux City in 1991 and made frequent weekend trips down to Omaha to hang out with Seth, Riley and McClay while they busked on the sidewalks of the Old Market.

All four (minus Thomas, who left Cultural Attraction in ’92) met at an F.O.E. Hall show where Pioneer Disaster, Fifth of May and Nine Days Wonder played. “The guys mentioned that they could take over a month-long residency another band, Cloud Machine, couldn’t finish,” Tulis said. “I told them I really wanted to be a part of it, but the deal was they already had enough guitars, which I played. John Riley said, ‘I have a bass. Take it home and see what you can do with it.'”

Where was the residency? At the time, some of the band members were living in the neighborhood that surrounded what was then a small sandwich shop off 32nd and California streets called Kilgore’s. Tulis says owner Chuck Kilgore had just acquired a liquor license and was looking for a way to draw a crowd on Saturday nights.

“Chuck said, ‘You have to bring in the PA, book the bands and run it,'” Tulis said. “We’d get the door money, half-price food and free beer. Saturday nights were ours as long as there weren’t any problems.”

A deal that was only supposed to last a month became regular Friday or Saturday night gigs for two years for Cultural Attraction and a slew of guest bands and performers that included Simon Joyner, Bill Hoover, Todd Grant, Hannah’s Porch, Richard Schultz, The Beef Curtans, Pleasure Closet, Mimi Schneider, Lonnie & the Lux-o-Values, The Glad Hands, Lavender Couch and artists that would become part of the Saddle Creek Records roster, including a very young Conor Oberst.

Kilgore’s filled a niche for musicians, who had few places other than coffee shops, open mic nights and house shows to perform. “Kilgore’s proved people were hungry for something new,” Tulis said. “It became the ground floor for musicians that have kept on playing up until now.”

Throughout this period, Cultural Attraction played gigs in clubs throughout Omaha and recorded two cassette tapes: Alien Head, released in 1993, and Shadows, released in 1995, which featured new guitarist and mandolin player Bob Garfield. But shortly after its release, Riley moved to Washington, D.C., effectively ending the band.

By then, McClay and Tulis already were playing in Lux-o-Values, which lasted for two years. After that, Tulis took a break before replacing Jeremiah McIntyre on bass in Fullblown, a gig that lasted until October ’99. That was followed by a year in Greg Cosgrove’s chamber rock band The Great Dismal. Then came The Monroes, The Imposters UK, Simon Joyner and the Fallen Men, The Third Men and Tulis’ current bands, The Sons of…, and Lupines, which just finished recording an album at ARC Studios.

After 25 years of playing in bands, Tulis summed up the experience this way:

“Being in a band is sort of like being on a business trip. You fly to a city you’ve never been to before and you land at the airport and you have to catch a cab with three or four other people in town on business. There aren’t a lot of cabs, so someone says ‘The next cab that comes along, we should share.’ So we all agree and climb into the cab. The meter’s running and things have to happen while everyone’s in that cab together, because at some point, someone’s going to climb out. That’s the time to make things happen, while everything is still working.”

Here’s hoping Tulis never climbs out of that cab.

Celebrate Mike Tulis’ alchemy of silver and gold June 11 at O’Leaver’s and see the reunion of Cultural Attraction. Joining them will be Little Brazil and The Sons of O’Leaver’s. Show starts at 9:30.