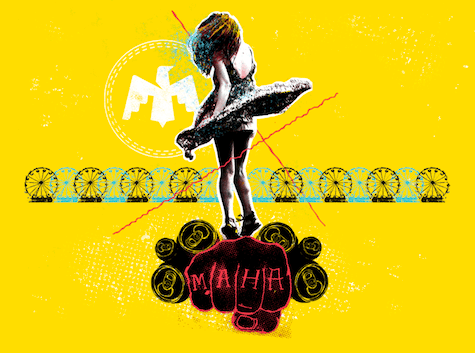 That’s my “slogan suggestion” for the 8th annual Maha Music Festival, being held at Aksarben Village Aug. 20, which features headliner Passion Pit, along with electronic popster Grimes, hip-hop phenom Vince Staples, returning Nebraskan Matthew Sweet and my favorite act of the line-up, Car Seat Headrest, a band that’s about to explode beyond the tiny, crippled indie music world (You heard it first hear on KTIM). Plus seven more star-studded acts and an entire park filled with fun, family-friendly festival mayhem.

But instead of that genius catch-phrase, the Maha braintrust went with “Maha Moves” as this year’s marketing tag line. That’s not bad, either. In fact, the festival’s entire marketing platform was based around the idea that this year’s line-up is guaranteed to get your booty shaking — a very rare thing for Omaha indie music fans.

Lauren Schomburg, the festival’s executive director (a brand new position for the non-profit) said the “Maha Moves” catch-phrase was dreamed up by the marketing team at local ad agency The New BLK long before any bands had been booked. “It was even before we began pursuing Ryan Adams for the festival,” Schomburg said, “not exactly someone who comes to mind when you think of that tag line.”

In the end it didn’t matter since they couldn’t land Ryan Adams, anyway. Instead, they landed Passion Pit, whose music is structurally designed to make your body move, or at least wag your head to their hypnotic beat.  Over coffee on the patio outside of Aroma’s in downtown Omaha during last month’s scorching heat wave, Schomburg explained the challenges involved in booking this year’s Maha Festival.

“It was hard,” she said. “Every year it’s a different kind of hard, but this year we were really struggling to find artists that fit the Maha mold who were available in our price range. It took us longer than usual.”

To understand the challenges, you have to understand all the barriers and how the whole thing falls into place. Although everyone on the 10-member Maha Music Festival Board of Directors has input on the line-up, Schomburg said this year’s primary deciders were board members Aaron Shaddy and Bill Sweet, who worked hand-in-hand with Omaha super-promoter One Percent Productions (specifically, One Percent’s Marc Leibowitz).

Schomburg said the team starts with a wish list then compares fees with the festival’s entertainment budget, as well as the bands’ availability. Early summer is high season for music festivals, which is one reason Maha moved its date back to late August a few years ago. “Lollapalooza (which was held the last week of July in Chicago) was really the last big U.S. festival,” Schomburg said. “By August, bands begin transitioning to the European festival circuit. We don’t think we’re getting outbid by other festivals, though our budget is still our biggest hindrance.”

In the end, it’s Leibowitz who ultimately juggles all the factors for the Maha team and helps them settle on a final line-up. “Marc has worked with us for years,” Schomburg said. “He cares and believes in Maha.”

Many offers were sent out, and many were rejected for a myriad of reasons. In the end, the mirrors aligned for Passion Pit, a so-called “indietronica” act from Cambridge, Massachusetts, led by singer/songwriter Michael Angelakos, whose debut LP, Manners, was a hit for Frenchkiss and Columbia Records back in 2009. It was followed by Gossamer in 2012 with the hit “Take a Walk,” which expanded their fan base when the song was used by Taco Bell to introduce the Doritos Locos taco. Their last album, Kindred, was released by Columbia in 2015.

“When we plan Maha, we take the overall experience into account,” Schomburg said. “We felt Passion Pit puts on a great live show, they’ve been heard on the radio in the past; we felt they would provide the best experience.”

Some have wondered why Grimes, a red-hot Canadian synthpop project led by Claire Elise Boucher, wasn’t named as headliner since their 2015 album, Art Angels (4AD Records), was on just about every music publication’s year-end “best of” list.

Another question about this year’s line-up: Why only three local bands (four if you count Matthew Sweet)? In years past, Maha had as many as eight locals (back in 2012). “When Maha started, Omaha didn’t have the network of venues it has today,” Schomburg said. “Most shows were at Sokol, and Slowdown and The Waiting Room were just getting started. There were fewer festivals back then, and we made it more of a priority to raise the visibility of the local music scene.”

Now there are more venues and more festivals and events. And there’s Hear Nebraska, a non-profit whose mission includes providing exposure for Nebraska music. “Hear Nebraska has been a game-changer,” Schomburg said. “We understand locals want to play Maha, and we believe in local artists, but we need to balance between what we are and what the community needs.”

And what the Maha Board wants.  When the Mount Rushmore of the Maha Music Festival— local businessmen Tre Brashear, Mike App and Tyler Owen — began the festival way back in 2009, it was easy to combine their visions, Schomburg said. “Now we have a lot more people at the table, which is why we developed the Community Village.”

Composed of a variety of area nonprofits, Maha’s Community Village provides alternative entertainment and hands-on activities from other area non-profits. It’s a real mish-mash of fun stuff, kind of like a science fair for local outreach organizations.

Schomburg said the Community Village adopted a “platform” this year centered around mental health. “We’re partnering with Nebraska Medicine, the Kim Foundation, Community Alliance and other mental health organizations to raise awareness about mental health issues,” she said. “Suicide is the No. 2 cause of death among 18 to 34 year olds” — an age demographic at the core of Maha’s audience.

It’s these kinds of thoughtful additions that make Maha more than just a rock concert Schomburg said, and why last year the organization hired an executive director (and a part-time associate in Joel Henriksen). “By having someone handle the day to day, the organization can begin planning strategically for the next two to three years,” she said. “That allows us to grow Maha in a smart manner rather than taking it a year at a time.”