Home » News » Over The Edge » Bernie and the Bird 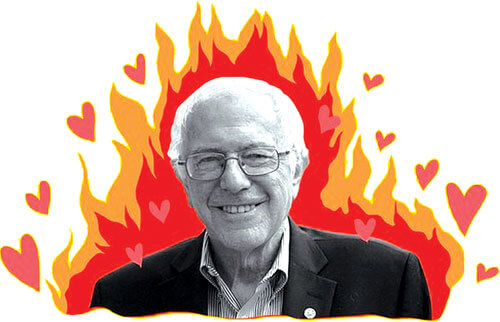 Yesterday several primaries were held in the Pacific Northwest… I think. Certainly Idaho was among the states that caucused for the Democratic candidate for President of the United States, right?

Why the nonchalant attitude?

While everyone stands aghast at what’s happening on the Republican side of the election, the real political junkies already have called the Democratic campaign for Hillary Clinton, regardless of what happened yesterday on the campaign trail.

The election results weren’t nearly as easy to find as the day after Super Tuesday. One had to shoulder through coverage of the Belgium bombing and the regional finals of the NCAA Basketball Tournament to discover the poll numbers.

There on the homepage of NYT.com, under yet another Trump story, was the headline I was looking for: “Bernie Sanders Seizes 3 States, Sweeping Democratic Contests.” Not Idaho but Washington was one of those states, along with Alaska and Hawaii. Bernie had taken Idaho days earlier.

According to the Great Grey Times: “Washington, the largest prize Saturday with 101 delegates in play, was a vital state for Mr. Sanders, whose prospects of capturing the nomination dimmed after double-digit losses to Mrs. Clinton across the South and weak showings in delegate-rich Ohio, Florida and North Carolina this month.“

After the spate of southern-tier state defeats, Hillary seemed like a lock. And despite yesterday’s trio of victories — winning one (Alaska) by as much as 82 percent of the vote — Sanders looked no closer to the prize than he had after Super Tuesday, except in the minds of rabid Sanders supporters who are looking for any sign of hope of hoisting their grey-haired hero onto the ticket.

I guess you could ask what difference it makes here in Omaha, since our caucus took place weeks ago. I was there, grudgingly seated on the Clinton side of a high school gymnasium watching as long queues of Bernie supporters filled the opposing stands, overflowing onto the basketball floor and into the side aisles, chanting “Bernie! Bernie! Bernie!” and looking as if they’d already won the national election, while the Clinton caucus voters looked on with dread and wondered…

Would 2016 become a replay of the loathsome 2000 presidential election, when Ralph Nader did just enough damage to Al Gore’s run for president to get George W. Bush into the White House? There’s still a foul taste in the mouths of those who were around back then, who remember Gore’s bitter defeat even though he earned nearly a half million more votes overall than GW. Had Nader, whose Green Party nomination was doomed before it began, not run, Gore may have pulled enough votes to win Florida outright and become president.

No one knows for sure. But most people still blame Nader for the rise of George W and everything that happened afterward. Now worried Democrats, terrified of a possible “President Trump scenario,” are afraid Sanders — either willingly or not — will pull a Nader by hanging around too long and making the Democratic race so close that his angry young supporters will stay home in November or write him onto their ballots in protest or vote for the anonymous Green Party candidate rather than hold their noses and pull the lever for Hillary.

It’s become one of the most feared scenarios by any sane-minded citizen, for as the Times points out, Sanders’ trio of landslide victories only slightly narrowed the gulf with Clinton in the quest for the 2,382 delegates needed to clinch the Democratic nomination.

If those election results weren’t enough to give the Bernie supporters false hope, along came The Bird.

In the years before social media, the odd fact that a finch landed on Bernie Sanders’ podium during a speech in Portland would have maybe garnered a casual mention among the more light-hearted press corps, if it was mentioned at all. Instead, the next day Facebook erupted with memes with lines like “Mother Nature Has Spoken” and “Birdie for President.” Memes are this generation’s campaign buttons.

Indeed, it looked like a sign from god. But the bird — along with the victories in Washington, Hawaii and Alaska and those that will follow — will only make Sanders’ defeat sting that much more. Especially if in the end Sanders draws more votes than Clinton and the mysterious “Super Delegates” end up being the deciding factor in Hillary’s nomination. Who can blame any staunch Bernie supporter for staying home in November?

It could happen. And we could end up with Trump. But I give Bernie voters more credit than that.

Most Bernie supporters I’ve chatted with have said they grudgingly will “do the right thing” in November. Or, as one person who has posted the most pro-Bernie anti-Hillary memes I’ve seen on Facebook told me via Messenger:

“Personally, although I am greatly opposed to Hillary’s loyalty to the banking and military industries, I can NOT stay home and NOT vote against Republicans,” my Facebook friend wrote. “I don’t think it is hyperbole to say the future of the planet is at stake (global warming), along with the future of most Americans as Republicans plan to continue to attempt ‘trickle-down’ as a viable tax plan. You can also throw in Republicans’ stances on evolution, LGBT rights, minimum wage, health care, Supreme Court positions at stake, etc… THERE IS NO WAY IN HELL I am going to sit by and NOT cast my vote against Republican policy.“

Hillary and Bernie could make it easy on him and the rest of Bernie’s supporters by simply joining forces on the Democratic ticket. But it would take a lot more than a magical finch to make that happen.