Home » News » Over The Edge » Hello Darkness, My Old Friend… 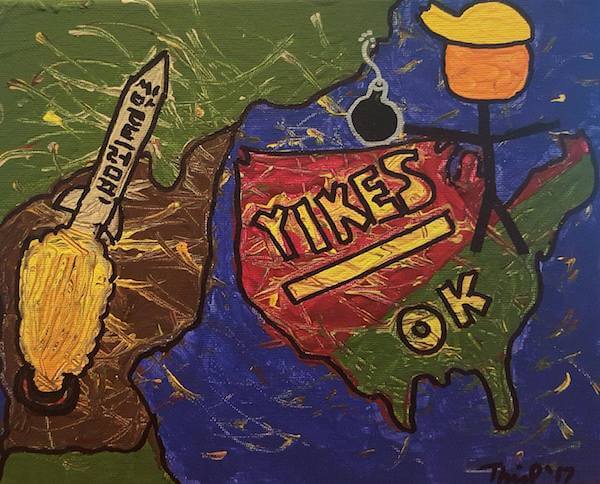 It was only a few days until Teresa and I were headed east to Cape Cod for a vacation.

This trip wouldn’t be the first time we visited the cape. Teresa’s parents had lived in Dennis, MA, and we’d visited them a decade or so ago, eventually going back to Dennis years later with her mother. The trips to New England are spent mostly walking on the the beach during low tide, wading in the August-warmed water from one tidal pool to the next, sometimes getting in up past our bellies or higher and then hurrying back to shore as the tide comes rolling in.

It was while pulling together last minute details for the trip and clearing away chores at work that news broke that North Korea finally had leapt over the last hurdle in its efforts to develop a nuclear warhead small enough to fit on top of a ballistic missile that could strike the U.S. mainland.

But what startled me even more was President Trump’s declaration that North Korea “best not make any more threats to the United States. They will be met with fire and fury like the world has never seen.” Trump eventually would double down on his threat and then brag via Twitter (erroneously, i.e., lie) that his “first order as President was to renovate and modernize our nuclear arsenal” and that it was stronger than ever before. A complete falsity.

This news was being relayed in real time via news alerts to my iPhone, and with each new warning, a deep, growing dread grew in the pit of my stomach, a dread I remembered from my childhood growing up with Nixon and Reagan and a perennial Cold War and looming threat that someone, somewhere was going to slip up and let the missiles fly.

So dreadful was the reawakening of this old doomsday fear that the thought of cancelling the trip to Cape Cod crossed my mind. There is nothing as strange and surreal as being away from home when a war breaks out.

I was fortunate enough to be safely in Nebraska when 9-11 happened. It was comforting to know you can always go home, especially when a number of my co-workers had found themselves trapped and unable to fly back for days after the towers came down.

On the other hand, I wasn’t home when the bombs began falling at the beginning of the first Gulf War on Jan. 17, 1991. I was in St. Louis on a business trip and wound up stranded at the dismal Lambert International Airport, at the time one of the worst airports in the country.

For reasons I never understood, my flight back to Omaha had been cancelled. For the next eight hours I cooled my heels in a terminal, soaking in whatever news I could glean via CNN broadcast on the lone television set in the terminal’s TGI Fridays. The screen showed the same footage over and over of thousands of rocket-trails blazing through the night sky like cheap fireworks, presumably headed to Baghdad.

This was the first real combat I could remember being reported since Viet Nam (not counting Granada) and the first I’d seen broadcast on live TV like an unfolding video game or movie-of-the-week. I remember thinking people were getting blown to bits somewhere far, far away and that it was our fault.

Eventually I got on a 9 p.m. flight, but never made it to Omaha. Instead the plane was rerouted to Sioux Falls, South Dakota, again for reasons only TWA knew (and weren’t telling us). There, we were loaded onto coach buses for a three-hour road trip that acted as a news blackout. Remember, this was years before smart phones. And though I didn’t know what was happening, I never felt anything like the dread I felt last month.

As our Cape Cod trip got closer, I hung on every word about the North Korea crisis, trying to shake this unbending feeling of fear. I wasn’t alone, judging from social media. My Facebook feed was divided between jokes (“Might as well tell us how Game of Thrones ends since we won’t be around to see it”) to panic and dire worry mostly from people my age who lived during the Cold War (though millennials have their own doomsday fear in the form of global warming).

Somehow I convinced myself that North Korean dictator Kim Jong Un would never try anything, and if he did, I’d be safer in New England because his missile wasn’t big enough to reach the East Coast. Actually, the reality of the situation took over the more I understood how everyone’s hands are tied near the Korean peninsula. Military options are limited without blowing up thousands (millions?) of civilians. Before Trump would try anything, his circle of generals would have him properly fitted for a nice, tight straight jacket.

Still, the day before we boarded the plane to Boston, North Korea announced it was targeting Guam, poor little Guam.

A few days later while walking on Corporation Beach, Charlottesville happened and instead of focusing on doomsday, the national media shifted its attention to the inevitable race riot that was/is bound to tear the country apart. Bumbling Trump again was at the center of it all when he tried to “normalize” the behavior of White Nationalists.

As an ex-military friend of mine said when I told him about my fear of the bomb: “I don’t dread ‘the bomb,’ and I never have. I don’t ‘dread’ anything, but I sure hope this Nazi piece of s*** doesn’t start a race war on my street in Vegas.”

Then he added: “Stop worrying, Tim. If it happens you’re right near SAC HQ, and you won’t even see the blinding white flash before you’re incinerated.”