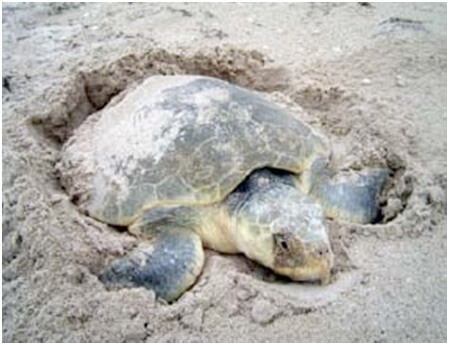 Dec. 1, 2018 — I was mindlessly flipping through my iPhone, half-glancing at photos of strangers that make up most of the people on my Facebook feed before I ran across a story from CNN with this headline: More than 100 sea turtles found dead off Cape Cod.

The headline was a gut punch. It was the kind of environmental story that always stops me in my tracks, like news about the ever-eroding coral reefs or destruction of the Amazon rain forest or the plight of the soon-to-be-extinct bumble bee.

The story described the 173 sea turtles washed up along the Massachusetts coast, overcome by the extreme cold. The director of the local Audubon Society blamed global warming for the deaths. There was more to the story, but I couldn’t get past the photo of a guy measuring one of the dead turtles on a table as if sizing it for a new tuxedo. I quickly hid the story from my Facebook feed so I wouldn’t bump into it again.

I’m finding more often that instead of reading or listening to the news, I’m going out of my way to avoid it. It certainly wasn’t like this two years ago before the presidential election, when I couldn’t get enough news about Hilary and Trump. Every night I’d tune into MSNBC or CNN as if tuning into an episode of an HBO mini-series about a fictional election pitting good against evil, all of it culminating in a series finale we assumed would end on an upbeat note, instead of like an episode of The Sopranos.

These days I turn on cable news and watch just to the point where I hear something that irritates me.

“Today President Trump attacked Supreme Court Chief Justice John Roberts on Twitter, undermining the judiciary by portraying them as nothing more than politicians in robes…“

Off goes the set.

“…U.S. Customs and Border Protection Agency shut down the border crossing in both directions and fired tear gas to push back migrants from the border fence…“

A friend of mine’s companion records three hours of MSNBC on his DVR every day, apparently to ensure he doesn’t miss a minute of the nightly shaming of Trump and the GOP. If you’re smart, don’t get him started on whatever latest outrage the president has unfurled on his Twitter feed. I asked him why he doesn’t get mad that nothing ever changes, that Trump has continued to be the same racist, misogynist piece of shit he was when they voted him into office.

“Don’t get mad, vote,” he said in response, quoting an over-used Obama catchphrase.

Well, I did vote, and in the mid-terms, so did more people than in the history of voting, and while the House of Representatives did change sides, the Senate only became redder. The morning after the election, MSNBC reported that Trump tweeted: “Received so many Congratulations from so many on our Big Victory last night, including from foreign nations (friends)…“

I quickly switched to the Food Channel.

Part of what drives my depression over the news is my perceived inability to do anything about what’s being reported.

Take the environment. I used to think cancer had replaced The Bomb as the one dreadful thing everyone just knows will kill us all. But fear of cancer has been replaced by global warming. In either case, there’s an overwhelming sense of powerlessness to do anything about it, just as we assumed we could never stop the politicians from pushing those mythical big red buttons that launch the missiles.

Powerlessness is the reason no one does anything while watching from their couches as Malibu turns to ashes or another city is flooded by this week’s superstorm. All the while Trump tweets: “Brutal and Extended Cold Blast could shatter ALL RECORDS. Whatever happened to Global Warming?” Maybe he should ask those dead sea turtles.

I’ve come to the conclusion that the old rich people who run our country could care less about global warming because they’ll all be dead before it impacts their lives. Certainly that’s the case for Trump, who, at age 72, will be long gone before Mar-a-Lago and the rest of Palm Beach is under water.

The most disturbing news that caught my eye over the Thanksgiving holiday: The suicide rate among Americans of working age increased 34 percent since 2000, according to the Centers for Disease Control and Prevention. The CDC director quoted in the story called it “a concerning trend.” It is indeed. And I’m beginning to wonder how much the 24-hour-a-day internet-infused news cycle is contributing to it. Maybe a lot; maybe not at all.

What I do know is that ignoring the news doesn’t make it go away. But taking a break from it doesn’t hurt, either. I can live without Rachel Maddow or Anderson Cooper or Chris Matthews at least for a few days. I can glance at Facebook and Twitter less often. And while I’m unplugged and blissfully ignorant, Trump and global warming and all the other catastrophes I can’t control will still be there when I get back.