Home » News » Over The Edge » Kicking the Tires 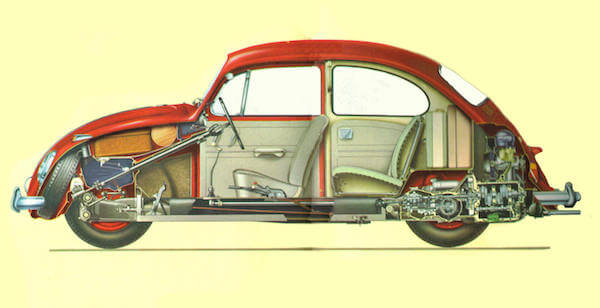 It seems only fitting that the last car I may ever buy is a Volkswagen Beetle.

After all, the first car I drove was a VW Beetle. Supplied by my father, it was a 1966 or ’67 and the color of chocolate milk except where the paint had faded and rust had covered the fenders and crept over the chrome bumpers.

While the exterior merely looked worn, the inside was something altogether different. The seats were ripped, and some sort of straw padding material poked through, sharp enough stab right through your jeans. Every surface was covered in a thin layer of dust — the natural by-product of living on county roads. Conveniently located beneath the mud-crusted floor mat was a rust hole the size of a hamburger, just large enough to drop wrappers or beer bottles.

And then there was the smell — not a bad smell, but a unique scent that can only be found in old VWs of any model — sort of a mix of moth-balls, rotting plastic and the ghosts of the fallen Third Reich. No number of pine-tree shaped air fresheners could mask it.

On the plus side, the car had a functioning radio and a hand-cranked sun-roof that still worked. And it ran like a top. Whether in the blazing heat or frosty cold, that little VW started right up — those Germans certainly knew a thing or two about reliability. They didn’t, however, know anything about heaters. Talk to any owner of a ’60s-era VW and they’ll tell you the same story about how in the winter, the heaters were little more than props. The only time the car’s interior ever warmed up was after you’d arrived wherever you were going, which is why every old VW is equipped with an ice scraper to scrape the inside of the windshield.

Despite all that, I loved my shitty VW and drove it most of my junior year until one day, I hit a pot-hole in the high school parking lot and snapped the axle in two. My dad simply replaced it with another VW from his fleet — a slightly newer robin’s egg blue Beetle with the same crappy heater, the same rustic smell.

Post graduation and upon beginning a job at K-Mart, I scraped up enough cash to buy my own car — a ’79 Ford Fiesta. Since then I’ve owned nearly a dozen cars, including my last one — a 2014 Subaru BRZ, a sporty little number but ill fit for anyone my height. After three years of performing a limbo dance to get into it (and literally crawling on all fours to get out), I finally decided last month to trade it in for a Beetle convertible.

Doing so meant overcoming a stigma that goes along with these rather cute cars seemingly designed almost exclusively for women and gay men — two groups of people I’ve always admired but don’t care to be confused with. My model, called the Dune, is VW’s effort to butch up the line by making it slightly wider and taller, adding larger wheels and a sporty trim package.

Even with these changes the car isn’t exactly macho, but I’ve finally gotten to the point where I don’t care what some dude driving a giant Ford truck thinks about my car. And unlike the Beetles of my youth, my Dune couldn’t be more luxurious, with its heated seats, rear camera and Fender sound system. It’s the most comfortable car I’ve ever driven, and, as I said, could very well be the last car I buy, if you believe Uber CEO Travis Kalanick.

During a World Economic Forum last summer, Kalanick said the roll-out of self-driving vehicles in the coming years could make car ownership a thing of the past. “Why would you own a car?” he asked at the forum’s annual meeting in Tianjin, China, this past summer. He equated car ownership to owning a horse you might ride for fun on weekends.

“I think that’s where the world is going,” he said. “People will not own cars, they’ll have a service that takes them where they want to go, when they want to go there. And that’s what Uber is.” He then went on to say this driverless future will be safer and more cost effective, certainly cheaper than owning a car.

I think about this every time I drive by the massive parking structure UNO is building on its south campus just off 67th and Pacific streets. If Kalanick’s vision is true, what are we going to do with all these parking garages and parking lots?

For someone who grew up driving, it will be a strange world indeed where no one owns a car but simply orders via smartphone app a driverless Uber whenever they need to go somewhere, paying only for as much of the car as they use.

The World Economic Forum pointed to one estimate that said there will be 10 million driverless cars on the road by 2020 — that’s only three years away.

There’s only one problem with the prediction. It fails to acknowledge how much people like their cars. Cars not only provide a sense of pride and an extension of one’s personality, they’re the essence of personal freedom and control. And let’s face it, people like driving. Yes, it can be dangerous, but that’s part of the fun.

It’s that danger, that unpredictability of human nature, that could be what forces the government to one day step in and declare driving too dangerous for humans, forcing us to give up our cars or at least our ability to control them. That’s a future so far away that by then, my now new VW will be covered in rust, have holes in the floorboards and will smell like my ’66 Beetle. And no doubt will be the pride and joy of some other 16-year-old.