Home » News » Over The Edge » Looking back, looking forward… 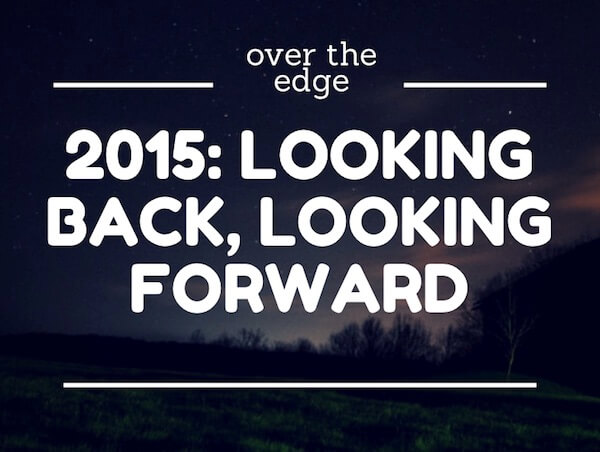 When you think back on 2015, what are the first things that pop into your head? Quick like a bunny. What are your most important memories of the past year?

The first things that pop into my head:

— The Paris massacre. Bleak television reports of kids at a rock concert getting gunned down in cold blood by terrorists. The scene in my mind is horrific — kids just like the ones I see at local rock shows running and pushing and trying to get out of the Bataclan Theater, mowed down like lambs to the slaughter, for nothing.

— Trump and the Republican presidential campaigns. Here we are in January and Trump, god help us, is still there on top of the polls. Despite his xenophobic, misogynistic, bullying rhetoric, despite his complete lack of a vision and any reasonable, realistic ideas, he stands on top, thanks (I guess) to his constant chest-pounding declarations of how much smarter he is than the rest of the field. The Republican campaign has turned into an election for a grade school class president (no offense to grade-school students).

— Global warming. Nobody cares. Not really. We hear the reports with dread in our hearts, like watching a giant astroid headed straight for earth, knowing there’s nothing we can do about it. Or so the media tells us. We turn off the lights, we drive less often, and the ice caps continue to melt anyway.

— Ferguson, Missouri. People rioting in the streets. Angry. Burning and looting. And then, just a few weeks later, another report of a kid getting shot by a cop. Unarmed. In the middle of a freeway. Caught on video. On TV. Has the state of race relations gotten any better in the past decade? Ask a person of color.

Then there’s Caitlyn Jenner. Amidst everything else, you couldn’t avoid the Jenner saga no matter how hard you tried. Are you, like me, wondering how the Kardashians became so famous for doing nothing?

What’s it say about us that when asked to look back on 2015 the only things that come to mind are solemn, terrifying, critical and trivial media-driven events? Why do so few good things pop into that empty head of mine? What did we achieve as a country, as a species? We didn’t land a man on the moon in 2015. We didn’t cure cancer.

The Year of Our Lord 2015 may go down as one of the strangest in recent memory, and I haven’t even gotten to local and personal stuff yet.

One thing that personally stands out about last year was The Reader going from a weekly to a monthly publication. Did anyone else notice? For me it meant going from writing 50 columns a year to just 12, giving me a lot more time on my hands, a lot less stress. And yet, I miss that open-maw of a deadline crawling on my back every Tuesday morning.

The Reader joined a long list of publications that shrank or disappeared last year, to be replaced by online “content” and social media. I recently was out at my dad’s house going through some old stuff when I ran across a rusty file cabinet filled with 1960s-era Playboy magazines. What shocked me wasn’t the old-fashioned photos of nude hippie girls or the sophisticated Mad Men-style design — what surprised me was the size and thickness of each issue — as thick a local telephone book, stuffed with stories and photos and ads. Did people actually have time to read all that?

Go to the magazine rack in your grocery store today and look at the sheaths of paper they call magazines. Even your average book is thinner than it used to be. No one reads anymore, at least not the printed word. Who has time? Not with binge-watching television shows, video games and the chore of constantly reading and updating everything on Facebook, Instagram, Snapchat and Twitter.

In the 1970s, Harlan Ellison — my favorite author — wrote that television would drive mankind to extinction by turning off our brains, turning us all into spectators, sucking away every last bit of our imagination. Harlan was wrong about TV. It’s social media that will eventually get us, blunting the shock of massacres, numbing our fear of global warming, propping up false leaders and turning us into lemmings headed toward the cliff.

Yikes. I haven’t even gotten to the most notable thing about 2015 for me.

Last year I turned 50 and my dad turned 80. It is weird and scary. My wife said, “I hope you’re not going to be one of those people who freaks out about his age.” I’m not, but getting older is strange because I don’t know how I got here, and now I get the feeling there’s no turning it off, there’s no slowing it down. There’s no turning back.

So what do we have to look forward to in 2016? The election? I’ll miss Obama. I think he’s the best president we’ve had in my lifetime. All the things Republicans point toward as Obama failures — universal healthcare, the state of the economy, the state of unemployment — are all triumphs in my eyes.

Whereas Republicans see nothing but flaws in Obama, I can’t think of an instance where I didn’t feel proud he was our president. He’s going to be a tough act to follow, whether it’s Hillary (likely), Bernie (unlikely) or Trump (puzzling, but very possible).

My hope for 2016 is that there are no Paris-style massacres, no more riots in the streets, that we begin to figure out what’s wrong with this planet before it’s too late. And maybe, just maybe, we all begin to turn off our computers and our phones and start paying attention to the world and the people around us, a world that isn’t fed to us by someone we’ve never met.