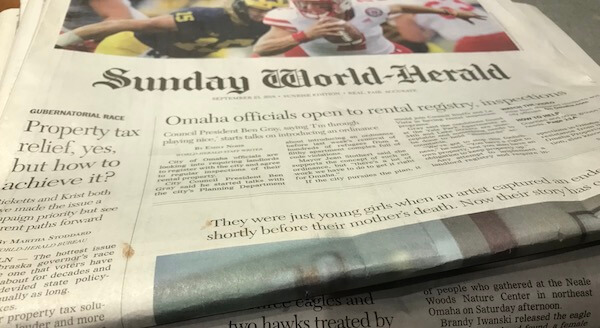 I picked up a copy of the Sunday Omaha World-Herald at Baker’s last weekend to see what I’d been missing all these years.

We quit getting the daily paper almost a decade ago but kept the Sunday edition coming because, well, just because. Then a few years ago during September the paper began arriving late, as in after my morning coffee, which negated one of the few reasons left for getting the paper in the first place.

After three weekends of late papers (promptly received after complaining to their customer service line), I finally asked the kindly OWH operator what the deal was, and was told, “Sorry, but the Huskers played a late night game, and we have to hold the presses to get in all of the coverage, which results in late delivery the following morning. We hope you understand.”

I did not understand and cancelled the paper. As someone who doesn’t give two shits about the Huskers, the paper’s priorities were made crystal clear, and they had nothing to do with me enjoying the weekly “funnies” alongside my morning coffee. In the paper’s defense, I’ve been told by a number of OWH staffers that the above story is complete hogwash, that they’ve never held the paper for football coverage.

All I can tell you is what I was told. In the end, it didn’t matter. We would have cancelled eventually.

In an era when most people get their news from various internet sources, the printed newspaper is becoming as obsolete as a milk box or a land line. These days, I look to Twitter for my news. If some tragedy strikes anywhere in the world or if Trump once again says something characteristically asinine, I see it first on my phone. Then I seek out a web source for confirmation, and finally I’ll go to Facebook to see how my friends and family are (over)reacting. And I’m not alone, based on how the paper’s readership has steadily declined over the past decade.

What’s left are four types of people who still subscribe to the Omaha World-Herald.

The first is old people who don’t like, don’t trust or don’t know how to use the internet. Theirs is a readership that is literally dying off.

Then there are the die-hard Husker fans addicted to the paper’s next-day wall-to-wall coverage of a game they likely watched the day before. That group, too, is shrinking every season that the once mighty Huskers fail to win a national — or even a conference — title.

Then there are the friends and family of people who actually work at the newspaper — another ever-dwindling support group.

And finally, there’s the philanthropic Samaritans, those who subscribe to the World-Herald for the same reason they give money to nonprofits and local charities — because it’s the right thing to do. They don’t actually read the paper; they just like the idea of a paper.

To add to its misery, it seems the Omaha World-Herald has been doing whatever it can to piss off that fourth group, as well as potential future subscribers. One recent headline, “Where millennials live in the Omaha area — and where to move if you want to find or avoid them,” stirred up a fuss-storm in social media by those appalled at the crass generalizations. As one person commented: “It’s now so popular to group-dismiss people. Just lump into one category, cherry pick commonalities and voila! invalidate.” She drove her message home with a sad-face emoji.

If there’s one audience the OWH should be courting, it’s millennials; but this headline seemed intent on pushing them away.

Another miss-fired headline: “Nightlife review: Papillion is the new Benson.” The story’s lead says Papillion is just right for the “Gen-X set and any demographic that enjoys good times and better parking.” Unfortunately this clumsy attempt at sarcasm or satire was lost on those who only read the headline in Facebook and never clicked to the story for fear of slamming into the OWH‘s paywall or the paper’s ghastly online experience beset with auto-play videos and circus-barker-style banner ads.

Speaking of ways to antagonize potential subscribers, consider the OWH‘s weekly “bag o’ savings” distribution. No matter how many times you call to stop it, there it is, every Wednesday, like a paper canker sore wrapped in a plastic bag to be tossed in the recycling bin unread.

A few months ago, the paper’s owner — Berkshire Hathaway — handed control of the Omaha World-Herald and its websites to Lee Enterprises, a Davenport, IA-based company that operates 46 daily newspapers around the country.

I remember the day Warren Buffett’s company bought the OWH and how the staff, who had watched subscriptions and advertising headed ever-downward, thought they found their savior. They forgot Warren is first and foremost a businessman.

The management shift to Lee resulted in a number of OWH employees losing their jobs and gave potential readers like me one less reason to subscribe. If it ain’t even managed locally, is it still “our hometown paper”?

Well, the answer to that question is “Yes.”  The World-Herald is still written and edited by friends and neighbors. And by god, despite everything I just wrote, I want it to survive, even if it’s a sad ghost of its former self.

Maybe the new union will make a difference. A couple weeks ago, we heard (via social media, of course) about the Omaha World-Herald Guild, “a union of frontline journalists working hard to produce Nebraska’s No. 1 newspaper.” According to its website (owhguild.com) 73 of the paper’s journalists signed union cards and are asking BH Media and Lee Enterprises to recognize them as stakeholders.

In some ways, it feels like a last gasp by a group of individuals who haven’t had a raise in years, who are only asking for fair wages and benefits and some advance notice before the next round of layoffs. Would a union even have the leverage to go on strike, and what if it did?

At stake, says the guild’s website: Journalism. And local control.

I’m old enough to remember when every issue of the World-Herald — not just the Sunday edition — was a butt-slapper, over an inch thick and chock full o’ stories. Everyone subscribed in the days before the internet because it was the only place to get real news. And now with the proliferation of click-bait bullshit social media “news sites,” us-versus-them television cable “news” channels and our current Liar-In-Chief White House Thug whose every utterance seems made up on the fly, newspapers like the Omaha World-Herald are our last bastion of unbiased fact-finding, fact-checking and fact-publishing.

Which brings us back to that Sunday paper sitting in a pile at my feet, whose cover is, as per usual, bannered with the usual Husker nonsense. But look beneath the masthead and you’ll find an in-depth story about an ordinance that targets local slumlords who create living hells like the roach-infested Yale Park Apartments at 34th and Lake streets. Where else are you going to find thorough reporting on this local issue? Certainly not on the internet or social media.