Home » News » Over The Edge » The Numbing Effect 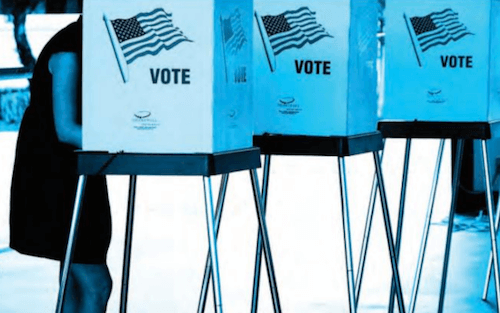 I figured I had a better than 50-50 chance of getting the election right. My reasoning was laid out as succinctly as possible in the column printed here last month— poll numbers, bad press, Trump stepping into one reputation-killing pot-hole after another. Sure that there was no way he could pull up numbers that, in some cases, showed him at close to double-digit deficits, I made my “assumption” — which you could confuse with a prediction — and put it in writing.

And, of course, I was wrong. Along with most of mainstream media, the pollsters and everyone I know. And while the column was never placed online, it most certainly made it into print, prompting reactions like this one from reader Mel G.:

I have to apologize for not reading your article until after the election was over … but I was at Finnegan’s Bar, and just sobered up. I’m not familiar with your professional background. Where did you work before this current gig? Was it at the Psychic Hotline with Miss Cleo ??? You are probably one of the Husker fans who thinks they should be in the Top Ten!

Touché, Mr. G. I can only assume you are a Trump supporter (though, considering my track record, I may be wrong). If so, congratulations on your candidate’s victory. My only defense (and it is a weak one) was the closing paragraph, wherein I  sarcastically hedged my bet, saying I could be wrong and we could now be living in The Trump Era, “in which case, we’ve got bigger problems to deal with…”

And here we are, at a place I never thought we’d be. Looking back to October of last year when I wrote my first column about this election, the thought of a Trump presidency seemed so outlandish, so utterly preposterous. Though now I admit, the possibility gnawed quietly in the back of my mind.

I write this column on Nov. 20, less than two weeks after the election. You’ll likely read it two weeks from now, in December. Something tells me even by then, nearly a month later, I’ll still be wrestling with the reality of a Trump presidency, and so will most of you.

But who knows. The first few days after the election, angry and disappointed people took to the streets to protest. What they were protesting, I do not know. Democracy? Despite everything leading up to the outcome, the actual mechanics of the election were fair and valid.

Now, two weeks later, the protests are dwindling. A numbness has fallen over those who at first were so frightened. Even for me, this election has become less of a tragic American blunder and more of a humorous set piece, as if we are now merely binge-watching the beginning of Season Two of a very long reality series, following Season One’s cliff-hanger ending.

It didn’t start out that way.

The only feeling I can equate to what I felt on election night was when a good friend of mine committed suicide a few years ago. The call came late and left me reeling. In addition to a deep, heavy stone that burned in my gut was the unshakeable thought that there was nothing I could have done. I didn’t sleep that night; just like I didn’t sleep on election night.

On top of my ideological fears, my anxiety was spurred on by solely personal concerns. The weeks leading up to the election, I had hemmed and hawed over whether to pull my retirement savings out of the stock market. A Trump victory, I assumed, would result in a massive Wall Street crash.

But a couple days before the election, the Dow blossomed by more than 300 points; traders were convinced of a sure-fire Hillary victory. I figured my 401k was safe and sound.

By 8 p.m. election night, I was kicking myself. As the map continued to turn red, business reporters braced themselves for the worst. U.S. and European stock futures cratered, while benchmarks in Asia slid into an abyss, and the Mexican peso crashed. Financial pundits were predicting a U.S. market “adjustment” the following morning of between 7 and 11 percent, or more. The Dow dropping by more than 1,000 points wasn’t out of the question.

So in addition to everything else that a Trump presidency meant for the future — a conservative Supreme Court, repealing ACA, reversals of trade agreements, deportations, threats to the LGTBQ community and a return to ’50s-era gender and race relations — I was about to see my retirement savings gutted.

I told my wife that, all things considered, we were young. The markets would probably recover before we reached retirement age.

We all know what happened the next day. Shortly after the market opened, I checked my iPhone’s stock tracker app. Something must be wrong, I thought. It said the Dow was up 5 points. An hour later, it was up 20. It ended the day closing up 256 points. I felt like I’d dodged a bullet.

As of this writing that well-boasted border wall is beginning to turn back into a border fence. Mass deportations are becoming less probable. And Trump has begun to hedge his position on Obamacare. Donald is beginning to realize the enormity of the task at hand, and that he was elected president, not king.

Every day my anxiety lessens a bit more. It’s easier for me. I’m a well-employed, well-educated white guy. Trump is supposed to make things better for people like me, right? That’s certainly what his supporters think.

It’s easy to become complacent about moral decay when you’re personally comfortable. And slowly, over time, you become numb to it, as the world changes around you and you no longer recognize your country. And by then, it’s too late.