Home » News » Over The Edge » The Ones that Stuck with Me 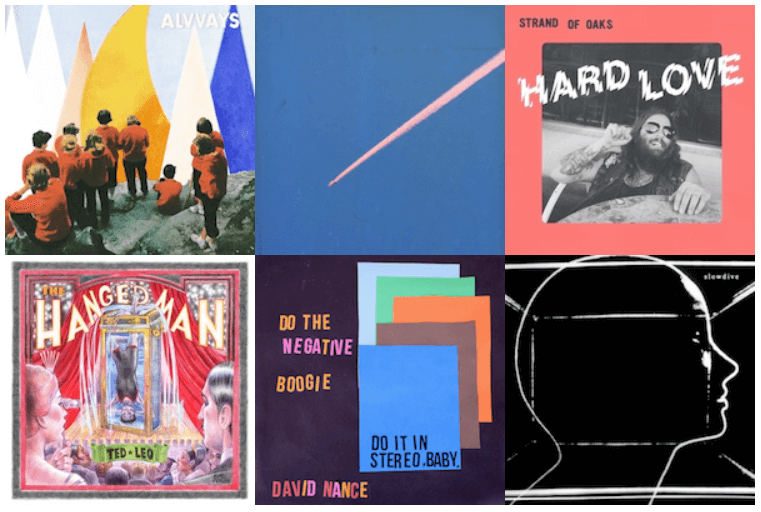 We used to close out the year at The Reader with our “Year in Review” issue, but after we went from a weekly to a monthly publication a year ago the editors moved the “year in review” to the January issue. I guess it’s a completists’ approach, so as to be able to include December releases.

My problem: By the time January rolls around I’ve already turned my back on the previous year and am looking with unbridled optimism toward the the future.

As such, I’m breaking the rules. Below is my year-end list of favorite indie music releases, right here, right now. Apologies to the missing Decemberists (Is that where the band got its name?).

Despite the fact that live indie music began to wane in Omaha this past year, the number of indie music releases in 2017 has to be some sort of record. It was virtually impossible to keep up with all of them, which is why I’m not calling this a “best of 2017” list. Of the hundreds of releases I listened to last year, these are the ones that stuck with me, and that I suggest you investigate further.

Strand of Oaks, Hard Love (Dead Oceans) — This strong follow-up to 2014’s HEAL finds Tim Showalter at his epic best a la The Who, though he could use a little more Townshend to cut through all the Daltrey.

Sheer Mag, Need to Feel Your Love (Wilsuns RC) — Kind of reminds me of The Ark combined with Butch Walker and modern garage rock but fronted by a firecracker of a lead singer in Tina Halladay, whose pouty growl is unforgettable.

Uranium Club, All of Them Naturals (Static Shock/Fashionable Idiots) — Brittle post-punk a la early Devo w/guitars instead of digitals. Quirky, jagged and fast as a 45, this slim EP is worth finding.

Courtney Barnett & Kurt Vile, Lotta Sea Lice (Matador) — Two of Matador’s best songwriters together, so what could possibly go wrong? I found myself wanting more Courtney and less Kurt, but in the end, the combination was peanut butter and chocolate all over again.

Beck, Colors (Capitol) —Vilified by some who wanted another drowsy Morning Phase, for me it’s the best (upbeat) Beck record since The Information and easily blows that one away with its sheer party intensity. Never a dull moment.

King Krule, The OOZ (True Panther) — Weirdly reminds me of Beck’s Mellow Gold and will probably have the same break-out effect, thanks to the droll barbiturate groove of “Dum Surfer.” Strange and new, just what we needed.

Perfume Genius, No Shape (Matador) — Mike Hadreas’ first fully realized masterpiece is loaded with anthems and heart breakers. I’d compare him to Sufjan Stevens, but there’s really no one like him.

Slowdive, Slowdive (Dead Oceans) — The first new studio album in 22 years from one of the few giants of the ’90s, it sounds like they never left. Haunting, intimate, ambitious and as relevant now as they’ve ever been.

Spoon, Hot Thoughts (Matador) — Britt Daniel has always had a thing for hot beats but he’s never been quite so dance-y. This time he steals from The Cure and The Cars, but so what? One of the funnest records of the year.

!!!, Shake The Shudder (Warp) — I was told by one local promoter that “no one listens to those guys anymore.” Really? Well, maybe they should. Guaranteed to make any dance floor glow (especially bum shaker “NRGQ”).

LCD Soundsystem, American Dream (Columbia) — I kind of wanted to not like this one because, after all, didn’t he retire? But it blows away his last (rather dull) album. A return to relevance; a return to the stadium.

Closeness, Personality Therapy (Graveface) — Whereas Faint songs (especially the early ones) have a sinister, pleatherish quality, Orenda’s sound always has been ethereal (by nature of her sterling voice). This electronic hybrid doesn’t so much combine the best of both worlds as create something new and glisteningly futuristic.

Conor Oberst, Salutations (Nonesuch) — The beefed version of last year’s Ruminations is his best full band release since the 2008 eponymous record, though the jury’s still out whether he should have just left the 4-track version alone.

Matthew Sweet, Tomorrow Forever (Honeycomb Hideout) — A return to form and his most accessible collection since 100% Fun or that Japanese “thank you” record, 2003’s Kimi Ga Suki, though it’s no Girlfriend (but what is?).

See Through Dresses, Horse of the Other World (Tiny Engines) — A breakthrough for a band that too often sounded like a reincarnation of ’90s college rock (as in Dinosaur Jr.). They come to their own combining post-punk shimmer with classic dream-pop drone for an end-product reminiscent of Saturdays = Youth-era M83 or early New Order.

The Lupines, Mountain of Love (SPEED! Nebraska) — John Zielger and the boys crawl out of the garage rock cellar to create something huge, majestic, like watching a’70s-era 70-millimeter western saga on the big screen.

Simon Joyner, Step into the Earthquake (Ba Da Bing!) — At it’s best, it blazes with a ’70s thrill of a Kristofferson album (or movie) combined with the urban grit of Lou Reed, all without losing the lonely tang of his unique voice.