Home » News » Over The Edge » The Specht Building: History Vs. Development 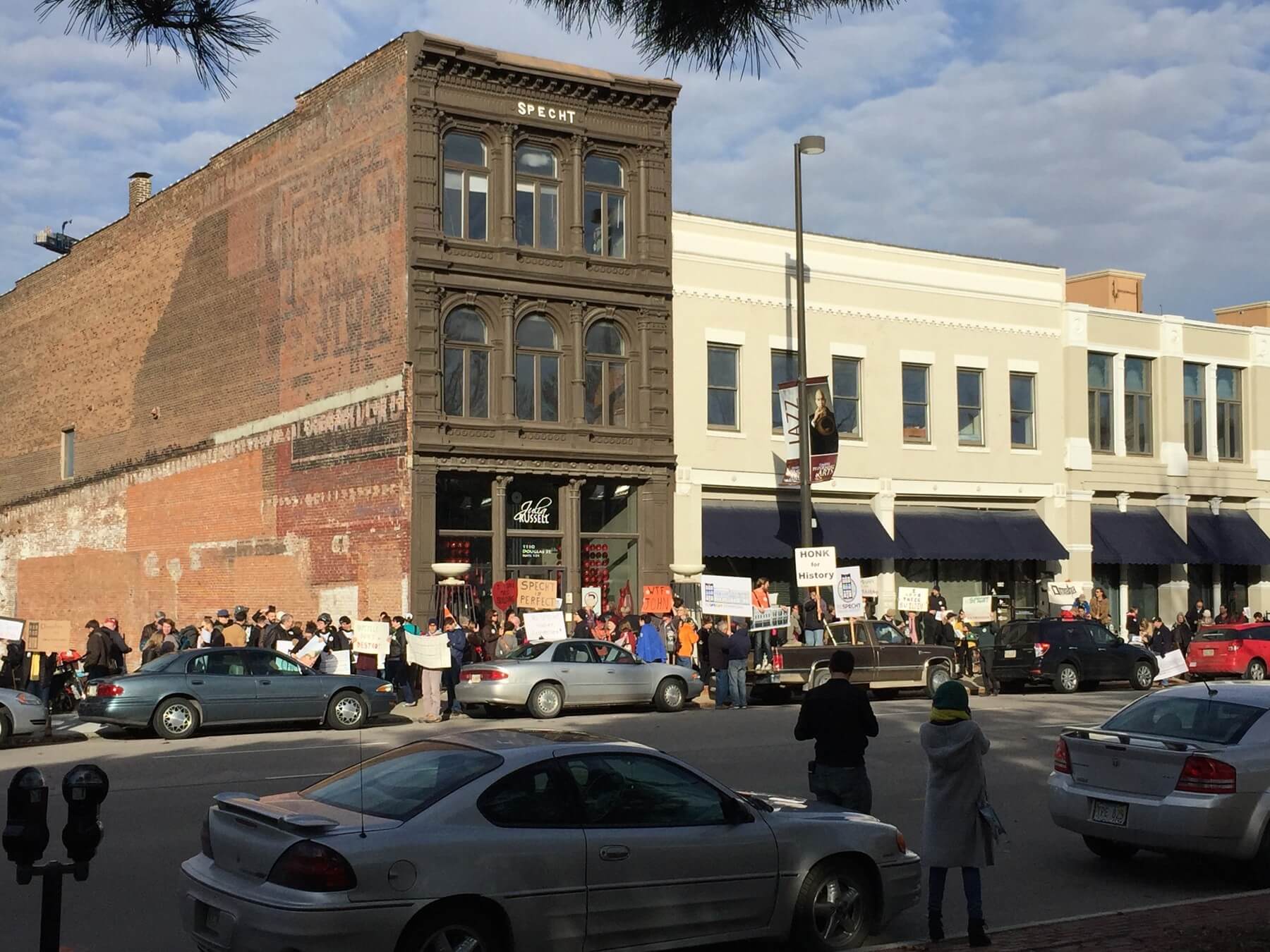 The TV news reports varied on how many were actually there. One station said 300; another quoted someone saying more than 500. From my perch across the street from the Specht Building, leaning over the brick overpass in Gene Leahy Mall, the crowd at its height appeared to number around 150. They held hand-made signs with slogans like “Omaha is My Homaha” and “Honk for History” and “ReSpecht Our Architecture” while people drove past along Douglas Street tooting their horns in support or acknowledgement. Toot toot!

About a month earlier I was walking my dogs, Evie and Gilda, on a route we humbly refer to as the Rich Walk. The byway glides down through JE George Boulevard. south to Dodge then up toward haughty Fairacres Road, where we were met by banner after banner that said, “Shame on Avi Morrison. He is tearing down 525 Fairacres Road.”

It reminded me of Curb Your Enthusiasm. “I steal forks from restaurants.” Google it.

Despite the neighbors’ attempts at public shaming, the wrecking ball had arrived a day or so earlier. The old mansion, which had been in a state of disrepair for years, had been transformed into a towering pile of bricks and dirt. A front-end loader stood next to the wreckage like a poacher posing alongside a fallen elephant. Somewhere on this bright, early fall morning, Avi Morrison was sleeping just fine.

Let’s start with this fact: Everyone loves old buildings. They remind us of a bygone era we’ve never experienced except in the movies. The beautiful facades with their ornate cornices and decorative detail. Yes, function was important, but these structures were designed in an era when every aspect of a building’s appearance mattered, right down to the crown molding. If you cropped the image just right you could imagine Model T’s or even horse-drawn carriages rolling past the mighty time capsules.

Old buildings are like old people standing strong in a world they never made, as everything around them changes. They give us hope that something we grew up with will be here after we’re gone; hope that if we’re lucky, maybe even something we’ve created ourselves will outlast the memory of our own existence, like these buildings.

So when one of these sentinels gets destroyed, it not only breaks our hearts, it crushes our dreams. The wrecking ball is a reminder that all too soon they’ll be shoveling dirt atop our caskets, and the earth over our graves will quickly be leveled, just like the concrete will pour to make way for yet another parking structure.

When does saving an old building take away the right of the people who own it to do what they want with their property? As much as it sucks for you or the neighbors in Fairacres, it was Morrison’s building, and he could do with it what he wanted. Why the rich folk in Fairacres chose to get upset over the Morrison building instead of the last three Fairacres mansions that were demolished is unclear; regardless, if they really wanted to save that old mansion they could have pooled their money and made Morrison an offer he couldn’t refuse. But apparently they could only scratch together enough money to buy a lot of banners.

The most successful efforts to save old buildings are the result of concerted efforts to purchase them.  The Benson Theatre, for example. A group of neighborhood citizens who wanted to see the old theater return to its past state of grandeur got together, formed a nonprofit agency, raised money and purchased the building located at 6054 Maple. Now they’re raising money to turn it once again into an operating theater. Hurrah!

Then there’s the Dundee Theater. We’ve all been biting our nails wondering what would happen to our beloved neighborhood movie house at 50th and Dodge, which has been “closed for remodeling” for more than two years. Then last month word leaked that Susie Buffett had taken interest in buying the entire block where the theater sits. If she does, the next steps no doubt could involve figuring out how to operate the projectors again.

On the other hand, we learned the hard way one method to keep old buildings standing that doesn’t work. Have it designated as an “historic landmark.” Who, like me, foolishly believed landmark status meant something, only to find out that our city council can sweep away the designation with a simple vote? Goodbye Clarinda-Page buildings, hello weed-covered empty lot.

The Specht Building also has been designated an historic landmark, but now we know better. Its fate is in the hands of Omaha Performing Arts (OPA) — the folks who run The Holland Performing Arts Center — who will acquire the building and the block it stands on in a move resembling a Monopoly game land swap with two other players — the City of Omaha and global architectural firm HDR, Inc. If the deal’s approved, everyone assumes OPA will tear down the Specht and its less-interesting sister buildings to make way for more parking.

Protestors say there’s already plenty of parking downtown. Apparently none of them actually work downtown or they’d know about the long waiting lists for monthly parking at all the nearby structures and lots. Parking sucks downtown except for those who don’t work there.

Despite the rally and petitions, it’s probably too late for the Specht and the other buildings. Suggestions that OPA can devise a way to incorporate them into their future plans takes into account everyone’s vision but OPA’s. But you never know.

The Specht’s probable demise is the price we pay for insisting that corporate headquarters be built downtown instead of in West Omaha, where most people who work in corporate offices live. Hey, there’s one way to keep the wrecking ball at bay — insist all new development take place out in the ‘burbs. But no one wants that.

So in the face of downtown corporate development, the only way to protect beautiful old buildings is to buy them, or figure out a way to have them recognized not just as historical landmarks but as untouchable national monuments. Because isn’t that how we view them?