Home » News » Over The Edge » The Wind Cries Stupid 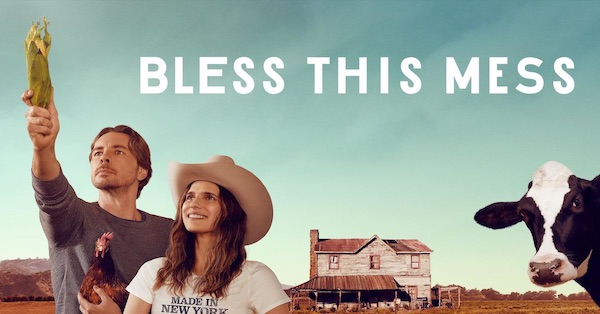 It’s easy to imagine the pitch for Bless This Mess, the new half-hour shitcom on ABC TV whose pilot aired last month.

Imagine the hip, hoodie-wearing pitchman or pitchwoman at the head of the Disney boardroom table giving this elevator summary: “It’s like a reverse Beverly Hillbillies or a modern-day Green Acres but with hipster yuppies and lots of funny Jewish references. And it’s based in a mythical land in the center of the map we’ve all flown over: Nebraska.”

The actual show description, taken from my Cox Cable on-screen TV guide: “Newlyweds Rio and Mike drop everything to make the move from New York to rural Nebraska in search of a simpler life, but they quickly realize that becoming farmers isn’t as easy as they had hoped.”

Now who wouldn’t want to watch that?

So … Fade in on the opening scene: An office interior where a series of patients one at a time sit across from psychiatrist Rio and try to talk her out of moving from big, loud, important Manhattan to a dusty ol’ farm in an unnamed, imaginary Nebraska town. Here, we discover Rio’s husband, Mike, has a great aunt who died and (presumably, with no other living relatives?) left the farm to him. We also learn Rio never farmed nor even stepped foot in Nebraska before. Neither has New Jersey Mike, a professional music journalist, which is funny by itself because everyone knows a music journalist could never live in a cultural wasteland like Nebraska.

With nothing to lose, they throw away their careers and start life over in a place they’ve never been before doing something they’ve never done before (but, really, how hard can farming be, right?).

Sure, it’s idiotic, but remember this is a 30-minute ABC sitcom. And just in case you happen to forget that little fact, the network has conveniently placed a small reminder in the lower right-hand corner of your screen that says: “ABC FUNNY.”

Rio’s husband, Mike, is played by Dax Shepard. You might remember him as Frito from the now-prescient 2008 Mike Judge film Idiocracy, which, if you haven’t seen it, I beseech you to immediately put down this issue of The Reader and find on Netflix so you can experience the cinematic doppelgänger of our current presidential administration and/or the times we live in.

Shepard also played Jon in the 2017 remake of CHiPS. No need to go looking for that one.

Rio is annoyingly played by relative newcomer Lake Bell, whose IMDB entry lists roles in a number of forgotten, short-lived TV series as well as animated voice work. She also bears blame for both co-writing and directing the pilot of this here series.

Back to our story.

On their road journey cross-country, the couple enters Nebraska presumably after driving through Iowa — directly into the treeless Sandhills, a reminder that the producers, who include Shepard, have never been to Nebraska and assume no one else has, either.

They finally arrive at the great aunt’s house and discover (of course) that it’s a falling-down piece of shit. The house seemingly has appeared out of nowhere, as if having fallen from the sky like an American Gothic version of Brigadoon or Shangri-La. It would have been FUNNIER had they shown typical rural Nebraska’s tangle of ugly power lines leading into the house or a weed-covered septic tank. Or a barn with the word TRUMP painted across the roof.

In a moment of hubris, Mike carries Rio across the threshold of their new home only to have the floor collapse, dropping the couple 12 feet below to the basement, somehow miraculously not breaking both of Mike’s ankles. Moments later, a piece of the roof falls in a puff of dust. Little do we know the hole in the roof will become a central plot device for the rest of the episode.

Need I go on? At this point you’re wondering how a shit-show like this ever got green-lighted in the first place. I’m guessing the rest of the cast had something to do with it.

Surrounding Shepard and Bell is an A-list of comedy veterans, including Ed Begley Jr. as Rudy, the old guy who lives in their barn; David Koechner (who you remember as Champ Kind from Anchorman) as A-hole neighbor Beau Bowman; Susie Essman (the foul-mouthed Susie Greene on Curb Your Enthusiasm) as Rio’s stereotypical Jewish mother. And best of all, Foxy Brown herself, Pam Grier as hardware store owner and county sheriff Constance Terry. Grier is the one peanut in this giant turd of a TV show.

The rest of the half-hour is filled with sight gags and quips with the only clue that you’re still in Nebraska being the Husker ball cap Mike wears. Well that and the moment when a wayward cow simply walks up to their house. Happens all the time, right?

What I like best about this mythical Nebraska: There’s never any wind. Ever. Even when Mike and Rio get stranded on top of the roof of their shitty house overnight in what we’re to believe is a violent Midwestern thunderstorm — no wind. That’s the Nebraska I want to live in.

I know it doesn’t matter that Hollywood keeps painting our state as a vacuous Nowhereland filled with rejected, nothing-to-do circus geeks, except for the fact that young people are moving away – in droves — while at the same time the state struggles to attract anyone to take their place. Even here in Omaha I’ve watched as year after year talented people leave – or are driven away – to find new, better lives in Portland, Chicago, New York, Los Angeles, Hollywood.

I have a feeling the series will be canceled by the time you read this. Or maybe it’ll air for years to come. And could you blame anyone who’s watched Bless This Mess for not wanting to live here? Then again, would we want anyone who likes that show to live here, anyway?

Category: Over The Edge
Tags: ABC Funny, Bless This Mess