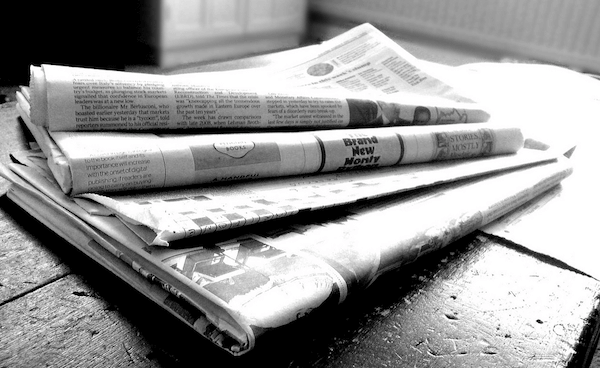 As we enter the “fake news” era, here is my first run-in with the genre.

The year was 1994. I had been writing about local music for a monthly regional magazine called The Note as a freelancer for two years, in charge of covering Omaha’s indie and punk music scene. The publication’s editor asked me to write a cover story about an Omaha punk band that recently had been signed by a national record label and was about to hit the road for an East Coast tour.

At the time, Nebraska bands rarely performed outside of the state. In fact, the idea that a local band could grab the attention of a national audience, let alone go on tour, was very much a novelty.

For the story, I came up with the idea of asking the band to call me from the road with tour updates. This was years before cell phones, so the calls would come long-distance via pay phones with reverse charges. Every day for a week, someone from the band — usually the frontman — would call from a remote East Coast location and recap road story after road story dripping with unbridled debauchery, kinky depravity and everything else that makes rock ‘n’ roll what it is.

A side note: I knew these guys well, or at least I thought I did. I had interviewed them before, and had watched them perform on Omaha stages numerous times. I trusted them.

Well, I wrote the story and it was published and distributed throughout college towns in Nebraska, Missouri and Kansas. A few days after it hit the streets, I walked in local record store/music Mecca The Antiquarium, and there was proprietor/guru Dave Sink behind the counter holding a copy of the article.

“Great piece,” he said. “I really loved the writing, but you know all those road stories were completely made up, right?”

I felt my stomach drop. I knew the guys in the band, but Dave really knew them. It never entered my mind that they could be lying, could be making up everything. Needless to say, the interviews were accurate — what they were quoted as saying was what the band members had said. I didn’t bother fact-checking their statements or their stories. I don’t know how I would if I had wanted to. What I did know for a fact was that the guys had indeed gone on a tour and called from the road — the operator indicated the location of the long-distance calls when I accepted the charges. But could the band members have been lying about everything else?

As a naive journalist, I assumed whenever I interviewed anyone, they were telling the truth, or at least the truth as they knew it; that no one would outright lie to me, lie to “the press.” What would be the point?

Today, 23 years later, lying has become an accepted part of how our country is run. We have a president who lies with a straight face, looking directly into a television camera, lying to an entire globe, lies so preposterous, so outlandish, everyone — including his staff, including his supporters — knows he’s lying. And, as a matter of course, we’ve all come to simply accept it for what it is.

The murder rate in our country is the highest it’s been in 47 years. Lie.

Terrorism and terrorist attacks in the United States and Europe have gotten to a point where it’s not even being reported. Lie.

And so on. There are pages of documented lies by Trump online at politifact.com. For some reason, it now seems necessary to define what a lie is. My definition: Knowingly and with intent saying something that is false. Die-hard Trump supporters — and we all know them — either ignore these lies or don’t care.

And I guess if everyone knows his lies are lies, it doesn’t really matter, until Trump gets us into a war and then purposely misstates what’s happening as our troops risk their lives on foreign soil. That’s when shit gets real. That’s when people start to care.

In the meantime, to counter his lying, Trump is waging his own war with the above-ground press, saying traditional sources of news — such as The New York Times, The Washington Post, the major broadcast networks and CNN — are FAKE NEWS (his caps) and are “the enemy of the American People!”

We all know it’s bullshit. Even Fox News’ Chris Wallace said Trump went too far attacking the press, telling White House Chief of Staff Reince Priebus “We don’t have a state-run media in this country. That’s what they have in dictatorships,” which made me recall that scene in the movie Die Hard when a cop car is getting shot up by terrorists and a bloodied Bruce Willis yells out a broken window of Nakatomi Plaza, “Welcome to the party, pal.”

It’s been a bad decade for journalists, who have watched their salaries get cut, their pensions disappear and the number of respected news outlets dwindle with the rise of the Internet. Journalism always has been a thankless, low-paying career, and now we’ve got the President of the United States calling journalists fake and dishonest and the enemy of the people.

And yet, they continue to put their heads down, pick up their pens and microphones and cameras and laptops, and do what they do. When Trump is finally gone and the smoke clears, it’ll be journalists who will emerge from the wreckage with the most dignity in tact. People will view journalists the same way we view teachers and social workers and other professionals who do what they do not for money, but because they want to make a difference the only way they know how. In journalists’ case, it’s by telling the truth.

By the way, I ended up tracking down that punk band shortly after I spoke to Dave Sink, and they swore what they said was the absolute truth, that Dave simply couldn’t believe what they’d been through. And though I believed them, I walked away from that incident ever wary. After all, anyone can lie, even a president.