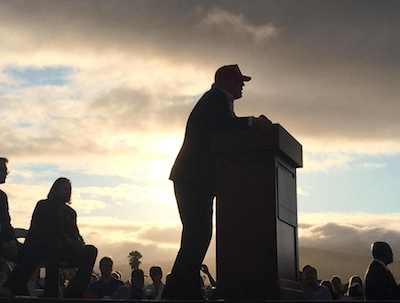 I tried to a avoid writing about Trump and adding to the cacophony surrounding his presidential campaign, but I couldn’t help myself.

There is no topic more alluring or gruesome than Trump, at least to a political junkie who approaches campaigns like sporting events. In that respect, Trump is that pro football team you always hated growing up. For me, it was the Dallas Cowboys, America’s Team, which got all the attention on TV and in the school yard. To this day I despise Dallas for no reason, really, but still can’t help but watch whenever they’re playing, quietly rooting for whoever’s facing them on the other side of the ball.

Trump always has been an easy person to hate. He’s the bully, the big mouth, the braggart at the party who’s quick to tell you about his expensive car while he explains why yours is a piece of shit. He’s the guy in the white GMC Yukon with the blacked-out windows who ignores the rules at the 4-way stop and barges through the intersection skipping the next guy’s turn, knowing there’s nothing anyone can do to stop him.

I naturally should be repelled by everything about him, and yet I’ve become quietly obsessed with Trump’s every move, his every word, scanning every digital headline for the latest tidbit, following @realDonaldTrump on Twitter, waiting for him to make that fatal misstep that will finally push him and his campaign over the edge. But God help me, if it hasn’t happened already, it never will.

What other candidate could do what Trump has done under the white-hot spotlight of the media and not only avoid being led naked through a town square followed by a nun barking “SHAME!” but still be a front-runner in a presidential campaign? He’s insulted POWs; he’s insulted Mexicans; a classic woman-hater, he’s been a misogynist his entire life. Could any other candidate make a comment about a woman’s “bloody wherever” and not get crucified? He’s attacked fellow candidates because of their physical appearance, because of their height, while at the same time bragging about his countless wives and personal wealth, which one assumes is his only real qualification.

If President Obama had done any of the above misdeeds, Congress would draw up letters of impeachment, signed by politicians on both sides of the aisle.

And yet, here we are. Trump continues to draw admiration not only from Tea Party nut cases but from people who I consider to be sane. Just last week I ran into a businessman friend of mine at Baker’s in the produce aisle. We got to talking about how wonky the stock market has been lately — rising and falling 300 points from one day to the next — and I joked, “Well, all that will change once President Trump is in office.”

We both sort of shock-laughed because the phrase “President Trump” sounded so surreal, and then my businessman friend said with a level voice, “He’s crazy, but I like the part about building a wall along the border and making Mexico pay for it. Why not?”

I wanted to say, “Because it’s crazy. Because we both know that’ll never happen,” but I merely nodded and smiled, thinking, “Now Trump has other people saying it. How many more people out there think he’s right?”

The answer: A lot. The notion that “Trump has the courage to say what’s on his mind,” is really an encrypted way of way of saying that Trump breathes new life into bad ideas we’d all hoped humanity had buried deep in a dark, cold place a long time ago. Trump is an outlet for unspoken rage. He’s like the giant, glowing “Dislike” button that Facebook users have desperately craved after years and years of scrolling through endless selfies.

But give credit where credit is due. I watched both GOP debates, including all three hours of the second one. There is no way I would have watched a minute of either had Trump not been on stage. I, and millions of other voters, know more about the acres-long field of Republican candidates than we possibly would have without Trump. He’s turned the presidential campaign into the ultimate guilty pleasure reality television show vs. the Democrats’ odorless, colorless, flavorless Sunday afternoon PBS programming.

That said, I know it will end.

I’m writing this on the morning of Sept. 23 for publication some time the first week of October. I almost didn’t write on this topic for fear Trump somehow will have fallen from grace by the time you read it, making the comments as dated and irrelevant as who won last month’s Emmys.

His downfall will either be something so quick, so severe, so shocking that no one will see it coming. His many sane supporters will finally wake from their drugged stupor, lying naked next to a stranger, wondering “My God, what have I done?”

Or, god help us, Trump will begin listening to handlers eager to sand off his sharp edges, and his campaign will suffer a long, slow, boring trip into obscurity.

Either way, we’ll miss him when he’s gone. His downfall will be a dull victory, just like when, during last Sunday’s Cowboys game, Philadelphia Eagles linebacker Jordan Hicks snapped quarterback Tony Romo’s left collarbone like a dry twig, sending Cowboys Nation into a tailspin. Romo will miss at least the next seven games, according to ESPN. The Bad Guys have indeed suffered a season-crippling blow. I should be happy, but the only thing that crosses my mind is, “Who will I root against now?”