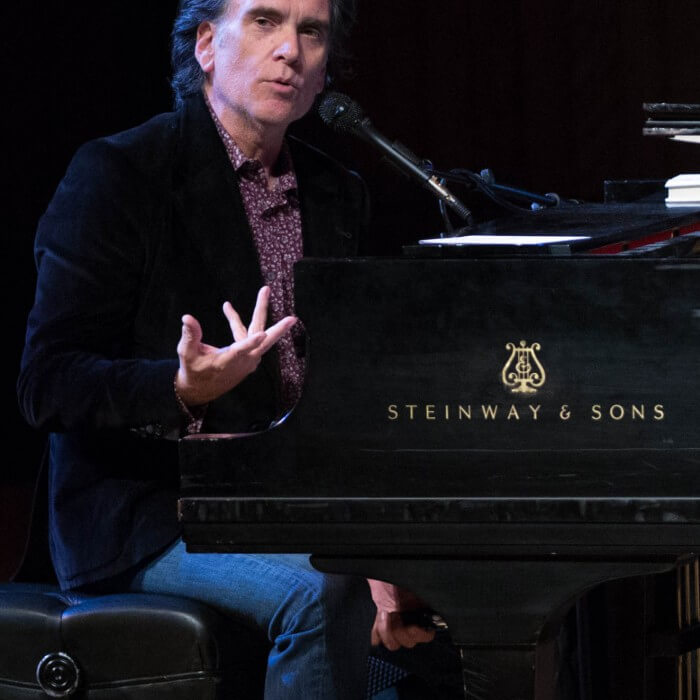 That’s how Peter Buffett, Warren Buffett’s son, described the “sprinkling” of charitable contributions by the wealthy.

“As more lives and communities are destroyed by the system that creates vast amounts of wealth for the few, the more heroic it sounds to ‘give back,’” wrote Peter Buffett in his New York Times editorial “The Charitable-Industrial Complex” in 2013.

“It’s what I would call ‘conscience laundering’ — feeling better about accumulating more than any one person could possibly need to live on by sprinkling a little around as an act of charity.”

“Because of who my father is, I’ve been able to occupy some seats I never expected to sit in. Inside any important philanthropy meeting, you witness heads of state meeting with investment managers and corporate leaders,” he wrote.

“All are searching for answers with their right hand to problems that others in the room have created with their left.”

Few people could make such criticism with greater resonance than Buffett. The career musician, composer and producer became a global philanthropist in 2006 when Warren Buffett tasked his three children, Peter being the youngest, with a fortune to manage for philanthropy. Peter calls it his own “big bang.”

His stage suddenly grew. His work with Native American artists and culture, which included Dancing With Wolves; Kevin Costner’s CBS miniseries 500 Nations, and Buffett’s own touring musical Spirit: The Seventh Fire, gave him a different perspective toward high-level philanthropy.

“It started with being tied into the native culture for a good decade or so before the philanthropy started, so I had a sense of colonialism,” Peter said in an interview shortly after the column was published.

The far-ranging discussion touched on the role of artists, business and government, as well as polarity, zombies, going native, and tips for charitable giving.

“I had a sense of the damage done when you’re disconnected from your home and the truth that you’ve known for millennia,” he said. “And that really is why I was so quick to come up with the philanthropic colonialism idea – because of my history.”

The viewpoint lets him continually test ideas, media responses and charitable investments. All to be weighed, he would insist, through one’s own experience and perspective.

“Just because I said, ‘The emperor has no clothes,’ doesn’t make me an expert tailor.”

It’s that child who says what others won’t say from “The Emperor’s New Clothes,”, who helps explain his role as public reflector and disruptor in the Buffett family’s philanthropy efforts. Howard Buffett, the middle brother who farms and writes, is more measured than Peter, while sister Susie doesn’t seek a public audience.

His artistic mother encouraged his interests and talent.

His website, peterbuffett.com, features essays, songs, photos, videos and live performances, including a recent performance based on his New York Times bestseller Life Is What You Make It.

Peter started a podcast series last month titled What’s Next. He considers it an ongoing conversation with thought leaders supported by his Novo Foundation. They live the belief that radical imagination as an essential ingredient of progress.

As an essayist, Peter is short on answers but long on observations. He not only challenges the status quo in philanthropy, but in also our culture.

“I think any time you’ve got expectations of continual growth, it’s got to always be a race that nobody wins because you’re racing towards some increasing number,” he said. “And if that number is based on maximizing one part of the puzzle, which would be profit and shareholder value and all that, you’re by very nature trying to minimize cost, which often are humans.

“Instead of bemoaning the fact that so many live on less than $2 a day, we should all be figuring out how to live on $2 a day,” Peter said. “I’d like to flip the whole thing upside down and drop the massive consumer culture altogether, and reconnect to each other and nature, and natural systems and rhythms.”

Peter sees the artist’s role as critical to that change.

“There has to be somebody out there dreaming, and imagining, and sort of synthesizing what’s possible. Then the businesses learn how to monetize the possibility, and then government learns how to regulate the business,” he said. “So government’s always last in terms of wherever the new beginnings begin. And sort of in that order, things have to come into being.”

“I worry that artist is too limited in people’s imagination of what an artist can be. Because they’re everywhere and I think more people need to feel comfortable with that moniker. I think people need to feel emboldened to be artistic in whatever they do.”

If the artist’s role is critical for change, it’s also reflective.

“I find it fascinating that in pop culture you often see the reflection of what’s going on in society. So in the 50s all these alien movies started happening – UFOs and stuff, and it was this outside menace which was basically the Cold War and communism,” Peter said.

“I don’t think it’s a coincidence that in pop culture now the biggest things are vampires and zombies. And they’re both obvious, in terms of how they play out, how people feel, how people feel the system is sucking them dry to some extent.”

Understanding not only begins with childlike wonder, but with the ability to really understand the “other.” One of the antidotes, Peter said, to Philanthropic Colonialism is “going native.”

“You want to hang with the natives to understand what their world view is like,” Peter said, “and by that, I really mean listen and experience . . . felt experience is everything . . . being in the environment is what breaks down the potential for misunderstanding and other-ness.”

“Being open to the possibility that someone may look different than you, live differently than you, have cultural differences – whatever – but that inside, and this is [how] I grew up with my parents,” Peter said, “we’re all bleeding the same blood and wish the same things for our kids. The fundamentals don’t change.

New shared outlooks allow for a new narrative and can change fear into fearlessness.

“I would say, to me, fear equals scarcity, reductionism—things that contract are going to be fear-based. Things that are fearless are things, again, like if you’re called crazy and you don’t care, that’s a form of fearlessness where you’re trying new things that may fail,” Peter said.

Peter thinks philanthropy should be the ultimate risk taker.

“I won’t say complete abandon because I would like to throw some wisdom into the fearlessness so we get some good results.”

In his essay Man-Made Extinction Event, Peter applies the same analogies to our approach to global warming. He hypothesizes a “new theory of social cohesion,” built on blocks of safety and trust. It’s important, he said, that those start at ground level.

“The short answer is this new code will come essentially from the bottom up, from the ground up, from local experiments, and people that are willing to use their imagination and to be thought of as fringe right now.”

Inherent in change and new narratives is a conflict we must embrace. Rather than find common cause, society is split.

“The trick is to somehow recognize that both [sides] exist. I’ve really been wrestling with this because I don’t think it’s some sort of transcendence to say we are all one and everything’s great. It’s actually to say ‘You know what, we’re all necessary and everything’s messy, but that’s okay.’

“We don’t have to really take sides. We can have different points of view and there’s back and forth. Batteries get their power because there’s a plus and a minus. Generally speaking, everything somehow runs because there’s polarity.

“Therein lies the potential for transcendence, I guess, for all of us because it’s the polarity that’s got us locked into this thing. It’s the ‘us versus them’. It’s the party versus the other party.”

Based on challenging fundamental assumptions and the lessons learned at the highest levels of philanthropy, what are Peter’s best tips for giving back?

“I always go back to local. I always go back to somebody you can look in the eye, a group you can visit firsthand,” he said. “I think our problems started with separation. The more disconnected you are or can be, the less you’re going to really know what somebody else is experiencing and feeling.

Peter stressed how charity should truly begin at home.

“So for charitable donations, I go straight to something you can touch and feel and see and experience in some way,” he said.

“I would say don’t go too far beyond your own backdoor, and really support the things you care about, and it can be a lot of things.”