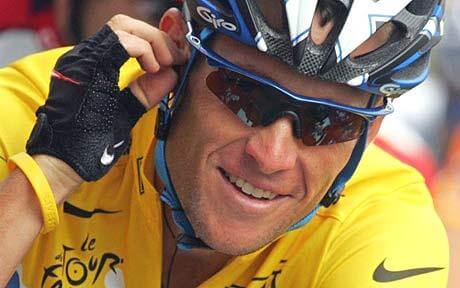 For reasons I don’t completely understand, this column is being written a full week in advance of its street date. As such, there cannot be anything timely or topical about its content. At a time when I can literally write a column and have it in front of your eyes on the ‘net in a matter of seconds, writing a column a week before you can read it is about as modern as outdoor plumbing or Mitt Romney’s position on women’s rights.

So with that off my chest, here are a few random topics that didn’t make it into recent columns….

— On Nov. 12, The Washington Post reported that disgraced cyclist Lance Armstrong formally cut ties with Livestrong — the cancer foundation he founded and the reason why people wear yellow rubber “support” bands around their wrists. Armstrong resigned as chairman of Livestrong on Oct. 17 as a first step in distancing the organization from his seemingly endless fall from grace.

I’ve always been a huge fan of Armstrong, having watched his unbelievable Tour de France performances since his first victory in 1999 after he also won a battle with testicular cancer. Now after allegations that he did everything from taking performance enhancing drugs to running a pseudo blood transfusion salon for his teammates during the tours, Armstrong, who still hasn’t admitted to any wrong doing, is being vilified as someone akin to Osama or Hitler, accused of strong-arming every person he’s ever come in contact with, forcing them to lie about his behavior.

And maybe he did; very likely he did. We will never know the whole story. What’s been lost in the discussion is the fact that every professional cyclist (probably) was using some sort of performance-enhancing drug or technique. I admit that I am the only person on the face of the earth who just doesn’t give a shit. There will never be a way to prove that any professional (or amateur) athlete is clean. So think about it: Whenever you watch any pro sporting event, you’re watching people who are taking PEDs. They all take drugs because their careers depend on them. What’s the difference between taking a PED and having a doctor administer cortisone shots directly into your knee?

But even if you take drugs out of the picture, there still has never been — and never will be — a “level playing field” because some athletes always will have advantages over others, whether in training techniques, use of  “approved” drugs, minerals and supplements, or simply better quality training facilities and equipment. Someone’s always going to have better stuff than others. Is that fair?

Does the fact that Armstrong gobbled handfuls of pills while being transfused with “fresh blood” make his victories any less significant when you consider that everyone else riding on the Champs-Élysées was doing it? At least that’s how Armstrong likely is justifying his behavior. For most, the bigger sin is that Armstrong lied about it, but who can blame him? There will never be a better example of a lie snowballing to such astronomical proportions. Imagine living with that whopper.

The only good news is that Livestrong will survive without Armstrong and will continue to support those fighting cancer. But will Armstrong survive without Livestrong and the fame derived from his “enhanced” performances? Here’s a clue: His Twitter feed still has more than 3.8 million followers, all wondering what he’s going to do next.

— Nebraska democrats can take solace that at least Obama won last week, even if their votes ultimately didn’t play a role in it. But that’s the only thing they can take solace in. As much as I wanted to see Bob Kerrey and John Ewing win, they never had a chance. I’m convinced that perennial boar tit Lee Terry could get caught red handed selling black tar heroin to Cub Scouts while wearing a ‘Fuck tha Police’ T-shirt and still get votes.

As for Kerrey, he never got over the flawed characterization that he was an opportunistic New York carpetbagger, an outsider riding the coattails of his past celebrity, and that his entire campaign was nothing more than an ego grab.  I thought he might have a chance when he launched a series of strong TV ads that called for reaching across the aisle and ending Washington gridlock. Then he replaced them with spots that tried to vilify Deb Fischer, who’s only redeeming quality was that she was a complete blank. Kerrey’s series of disturbing — if not unintentionally funny — TV spots showed a bunch of country bumpkins “afraid” of Fischer, portraying her as a wicked Western Nebraska land baron asshole. “Neighbors don’t sue neighbors in Nebraska.” They don’t?

But even if he’d stuck with his original commercials, Kerrey would have lost. I hear he’s already living back in New York City. The only question that remains is what he’ll do with the house he bought and is renovating near Memorial Park.

— Finally, a moment to say the new Ralston Arena is absolutely first class and will be a fine permanent home for the Omaha Lancers and temporary home for the UNO Mavericks basketball team. The facility clearly was designed for hockey, with perfect sight lines from every seat — a massive step up from the over-sized Century Link cow barn. For basketball, the arena is just so-so. Seats behind the baskets are simply too far away from the action. But when it comes to Mavs basketball it doesn’t matter because so few people go to games that you can just get up and move to another section without being hassled (since there are no ushers). Plans call for hosting concerts at Ralston’s arena. Good luck. The acoustics were so bad PA announcements were indecipherable in the bouncy echo chamber. Imagine how bad a rock band would sound.

When it comes to arenas and rock shows, nothing will ever replace the Civic Auditorium. Alas my old friend – where I saw my first Styx concert – now awaits a date with a wrecking ball.