Home » News » The Club Is Open: Cursive Takes Over O’Leaver’s 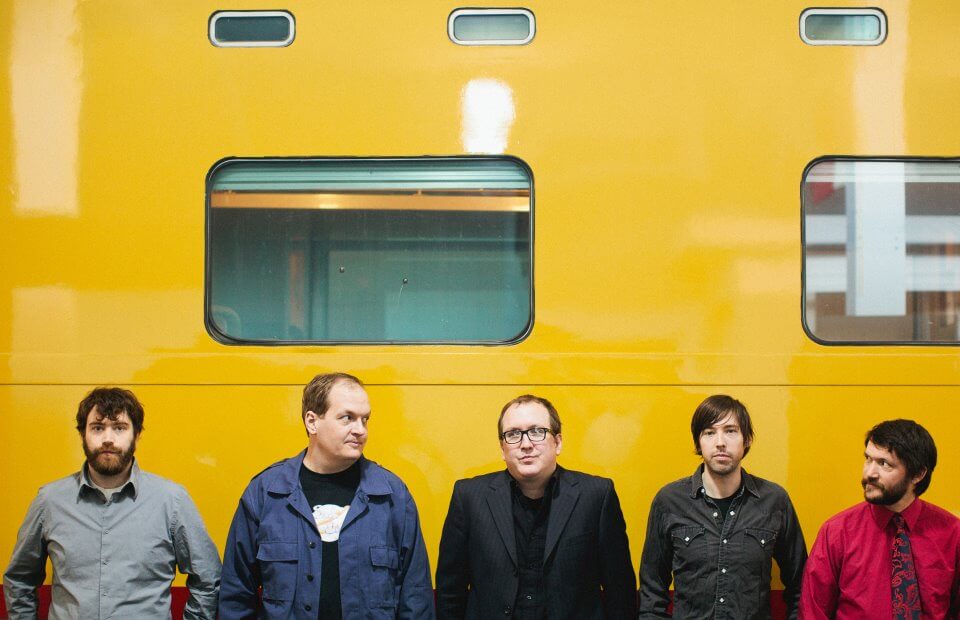 Sunday as I was leaving Lowe’s on Dodge Street with Matt Maginn I ran into my brother-in-law Steve headed on his way in. In years past I would have introduced Matt to Steve as “the bass player of Cursive, one of the most important rock bands that Omaha and/or Nebraska has ever produced.” But instead I said, “Steve, this is Matt, the new co-owner of O’Leaver’s.”

Yes, you read that right. O’Leaver’s has changed hands. Chris Mello, the saint and/or devil who took over the reigns of the club sometime after the turn of the millennium, has sold his house of decadence to the guys in Cursive — frontman Tim Kasher, guitarist Ted Stevens and Maginn, along with longtime O’Leaver’s bartender and fellow rock star Chris Machmuller of Saddle Creek Records band Ladyfinger.

That’s why I was headed to Lowe’s with Maginn on Sunday. We tooled on over in his shiny SUV to pick up three more gallons of poo-brown paint that was being sprayed over the club’s dingy ceiling tiles. Fixing the ceiling and those gawdawful bathrooms is first on a very short list of planned changes. In other words, if you — like me — love O’Leaver’s just the way it was, you have nothing to worry about. Its well-worn quality was one of the reasons Cursive wanted to buy the bar in the first place. The new management’s only concern is that you don’t catch hepatitis C while downing your PBR/Jagermeister/Rumplemintz — or in my case — bottle of Rolling Rock.

But I’m getting ahead of myself. Those outside the local music scene or who don’t count themselves a member of the Midtown Dead Drunks Society are probably asking, “What is O’Leaver’s and why should I give a shit?” Good questions both.

In addition to being one of the area’s premiere dive bars, O’Leaver’s Pub, located precisely at 1322 Saddle Creek Road, also is a music venue of last resort for some of the area’s best indie, punk and garage bands. I could roll out a list of Omaha-famous bands you’ve never heard of who have played at O’Leaver’s. Doesn’t matter. What matters is that after Mr. Mello took over the bar a decade ago, he hung a PA from the ceiling, cleared a space in the back of the room and set up a “stage” where bands could perform while being stared at not only by the bar’s drunk/drugged patrons, but also by the stars on the record sleeves stapled to the walls — Michael Jackson, Phil Collins, Van Halen, Bruce Springsteen, Barry Manilow.

The Waiting Room and The Slowdown may be the best clubs in town to see and hear live music, but O’Leaver’s is my favorite. It’s the kind of place where no one cares who you are, what you look like, who you’re with or what you’ve done. All sins are forgiven when you walk through its doors.

So, after much negotiation and lawyer-ing, the handover took place Dec. 1. The sale — which is for the business only, not the property — won’t actually close for another 60 days. The new management will be operating under a temporary liquor license until their actual license gets approved. Their only changes in addition to the poo-colored ceiling, a thorough cleaning and those new minty fresh bathrooms will be installing some of Cursive’s excess sound equipment, including a 24-channel “snake,” some replacement amps and better monitors.

My first question for Maginn as we sailed back from Lowe’s: Why would a successful rock band that knows nothing about the bar business want to buy a rock club like O’Leaver’s?

“Mello wanted out and we all three dig the place,” Maginn said. “And it’s something else we can do together other than the band. Also, Chris (Machmuller) has wanted to take the place over for years. By partnering with us, he can. Chris will be the manager.”

Maginn said Mello had other offers over the years, but “If anyone else took over, they would have changed it into a sports bar or something,” Maginn said. “We’re not going to change a thing. To me, it’s like one of those great places we found while on the road, the place to go to after a show, with friendly people and good music.”

Those afraid that the booking policy will change have nothing to fear, Maginn said. The same people who booked the club before will help book it moving forward, though Ted Stevens might help bring in a “more diverse selection of bands.” As has been the case for years, expect only a couple shows scheduled per week.

“We don’t want people to think we’re turning this into a music venue,” Maginn said, adding that, like always, bands will get whatever they bring in at the door after paying the sound guy. The traditional $5 cover for band nights will stay, unless bands want to try charging more. “Five dollars seems to be about right, though,” Maginn said.

For he and his bandmates, the takeover’s timing couldn’t have been better. Cursive has been on the road since their latest Saddle Creek Records album, I Am Gemini, was released in February. This year will go down as the band’s busiest — nearly 200 days on the road playing more than 150 shows.

Running a club seems to be the natural career progression for successful local musicians. First there was Jamie Massey of the band Ladyfinger who joined a partnership that bought Mick’s and turned it into The Sydney in Benson. Earlier this year Bright Eyes’ Conor Oberst opened Pageturners in Dundee. And now Cursive owns O’Leaver’s.

I guess rock stars are like professional boxers who dream of owning their own place after their time in the ring has ended. It’s good to have somewhere to go where people remember your past glories after the roar of the crowd fades away.