Home » News » The Return of Baseball 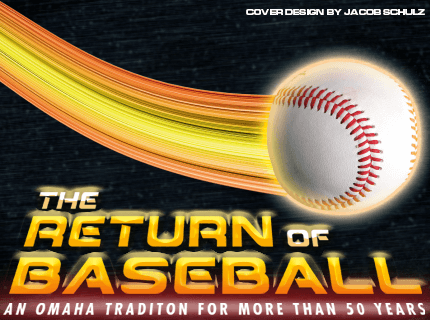 Pauli’s isn’t Pauli’s anymore. The old bar on an old stretch of Leavenworth Street used to be a hub of activity during the College World Series. Sometime in the early-1980s the ESPN talking heads made it their home base following telecasts and with that the crowds came. It never made much sense. The bar wasn’t anywhere near Rosenblatt Stadium but people kept coming, swayed by the chance to rub shoulders and bend elbows with the likes of Harold Reynolds or Dan Patrick.

Like Omaha itself, Pauli’s was a little rough around the edges and far from conventionally beautiful but it was friendly. It was the CWS distilled down to what could be the tournament’s log line: Big-time baseball, small-town charm.

Pauli’s was sold late last year, rebranded as The Recovery Room. It’s still a Cubs bar, with a hand-painted team logo out front and specials on Old Style any time the Northsiders are on TV, but things are different now. One wall is devoted to Creighton basketball memorabilia, another features a big-screen edition of Golden Tee and an Internet-equipped jukebox. No walls feature any CWS merchandise.

One week before the start of the second CWS at TD Ameritrade Park I asked the bartender working on a slow Saturday afternoon what The Recovery Room had planned for Omaha’s big week in the national spotlight. The answer was nothing. No beer garden, no shuttles to the stadium, no drink specials.

“The College World Series is done for this part of town,” he said. The truth is, outside of Pauli’s, the CWS was never really a part of that neighborhood. That’s what made it special. It couldn’t be explained. There was no good reason for a bar five miles away from all the action to even have a pulse much less be the heartbeat of CWS nightlife.

But when the series moved downtown, closer than it had ever been before, it got further away from Pauli’s. Crowds that used to number in the thousands dwindled to little more than 100 during the tournament’s first weekend last year according to owner Paul Griego. Theories as to why are abundant. Actual answers are not. Progress can be legislated, voted upon, contracted out, constructed, and championed. The one thing it can’t be is controlled but that’s never stopped anyone from trying.

There’s a new bar just beyond the right field wall at TD Ameritrade Park that will become the spot to be this year. The building that houses the just-opened Blatt Beer & Table didn’t exist a year ago. It has the exposed brick and steel girders of all the faux-retro ballparks of the past 20 years. It shares a corner with Zesto’s, the popular ice cream shack that occupied a similarly prime spot next to Rosenblatt. The pictures on the walls are of a black-and-white Omaha and the name is taken from the city’s beloved, and soon to be demolished, old stadium. Everything about the place was built to remind us of what we liked about the way things were while providing all the amenities of the way things are. Blatt makes perfect sense at the new CWS.

That’s why it won’t be the new Pauli’s. It will be something else entirely. It was built for times like these, and that might be the most fitting approach as a new Omaha grows around its long-time signature event. It’s certainly fitting for a tournament field that feels less familiar than that of series’ past.

There are still plenty of perennial powers in Omaha this year. Back-to-back national champions South Carolina returns to defend its title. Rosenblatt mainstay Florida State is making its first appearance at the new ballpark. Arizona, an old powerhouse with three national titles and 16 CWS appearances to its name, is back in Omaha for the first time in eight years and only the second time since winning it all in 1986.

But most of the local adoration will be reserved for Stony Brook and Kent State, the two newcomers in this year’s tournament. Not only are they newbies, they’re a rarity in that they’re from “the north” and that plays well in what is now Big Ten country. Stony Brook is the first team from the northeast to make it to Omaha since Maine made the trip in 1986 while Kent State is the first school from Ohio to make it since Ohio University in 1970.

Neither team will be a favorite when the CWS opens on Friday, but for a tournament that’s undergone as much change as this one has recently, a deep run only seems fitting.

The field in full:

Arizona brings plenty of offensive firepower to Omaha. The Wildcats finished fourth nationally with a .333 batting average this season and were even better during their 5-0 run through the postseason, hitting .420 while scoring 61 runs. Pac-12 Player of the Year and Defensive Player of the Year SS Alex Mejia is one of four Wildcats who started all 60 games this season along with 3B Seth Mejias-Brean, OF Robert Refsnyder and OF Johnny Field. Questions remain on the mound. Arizona ranked 94th nationally in ERA and 50th in WHIP.

Head coach Dave Van Horn should still have plenty of friends in Nebraska. The man who took the Cornhuskers to their only two CWS appearances in school history is back in Omaha for the third time with the Razorbacks. Arkansas enters the tournament with the second best team ERA (2.95) and the third-best team WHIP (1.21) in the CWS. RHP Nolan Sanburn was selected in the second round of the MLB draft by the Oakland A’s and has big league velocity, regularly topping 95 miles per hour on the radar gun. INF Matt Reynolds, a second round draft pick of the New York Mets, leads the Razorbacks in batting average (.344), slugging percentage (.532), on-base percentage (.449), home runs (7), and RBIs (43).

Top-seeded Florida returns to the CWS for the third straight year and should be plenty hungry after coming within one game of the national title in 2011. The Gators could be the most complete team in the tournament, leading the nation with 75 home runs this season and also leading the CWS field with a 2.90 team ERA. First-round draft pick and Dick Howser Trophy finalist C Mike Zunino (19 HRs, .678 SLG%) looks like a start in the making while OF Preston Tucker (16 HRs, .587 SLG%) keeps teams from pitching around Florida’s star catcher. RHP Hudson Randall led a deep and versatile pitching staff with nine wins in 15 starts.

Few names are more synonymous with Rosenblatt Stadium than that of Florida State head coach Mike Martin. This year marks the 15th appearance for Martin in Omaha and Seminoles are a serious contender to deliver the national title that has so far eluded the legendary coach. FSU crushed perennial powerhouse Stanford on their way to the CWS, scoring 35 runs in two games. 1B Jayce Boyd (.389 BA, 59 RBIs) and OF James Ramsey (.382 BA, 57 RBIs) lead the hot-hitting Seminoles offensively while RHP Robert Benincasa has been a lights-out closer with 15 saves and a 1.25 ERA on the season.

Kent State may be an unfamiliar face in Omaha but the Golden Flashes have been quietly building to this point. The Flashes have made the NCAA Tournament in four of the past five and won 21 of their last 22 games to finally break through to the CWS. Kent State features three players who were named Louisville Slugger All-Americans in 2012. 1B George Roberts (.368 BA, 64 RBIs) leads the Flashes offensively while LHPs Brian Clark (1.59 ERA, .160 Opp. BA) and David Starn (2.21 ERA, 11 wins) provide strength on both ends of the rotation.

Head coach Ray Tanner has South Carolina back in Omaha for the sixth time in the past 10 years. The Gamecocks gutted out national titles in each of the past two tournaments and enters this year’s CWS with an NCAA-record 21 game tournament win streak. South Carolina has the lowest batting average (.271) of any team in the tournament so the Gamecocks will once again look to pitching to lead them in their quest for a third-straight title. Starting pitchers Michael Roth and Colby Holmes both went 7-1 this season while closer Matt Price (11 saves) is battle-tested, making the CWS all-tournament team in 2011.

The plucky team from Long Island upset Omaha fan-favorite LSU to earn their trip to the CWS, but don’t get too caught up in the Cinderella narrative. The Seawolves are solid across the board, ranking in the top 12 nationally in team batting average (.335), ERA (2.99), and fielding percentage (.978). OF Travis Jankowski, a first-round pick of the San Diego Padres, has the best batting average (.422) of any player in the CWS and leads the nation with 109 hits on the season. C Pat Cantwell, a third-round pick of the Minnesota Twins, handles a pitching staff that ranks behind only SEC powers Florida and South Carolina with a 1.16 WHIP. Stony Brook’s story is good, but the team might be even better.

UCLA enters the CWS on a hot streak, winning nine straight games and 16 of its last 17 and the Bruins are stacked with one of the game’s most precious commodities — pitching. RHPs Adam Plutko (11 wins) and Nick Vander Tuig give the Bruins two frontline starters and things don’t get any easier for opposing batters in the bullpen either. Freshman reliever David Berg has the lowest ERA (1.58) of any pitcher in the tournament while closer Scott Griggs ranks ninth nationally with 15 saves. OF Jeff Gelalich (.365 BA, 11 HRs, 46 RBIs) provides the offensive firepower for a Bruins team that must be considered among the CWS favorites.