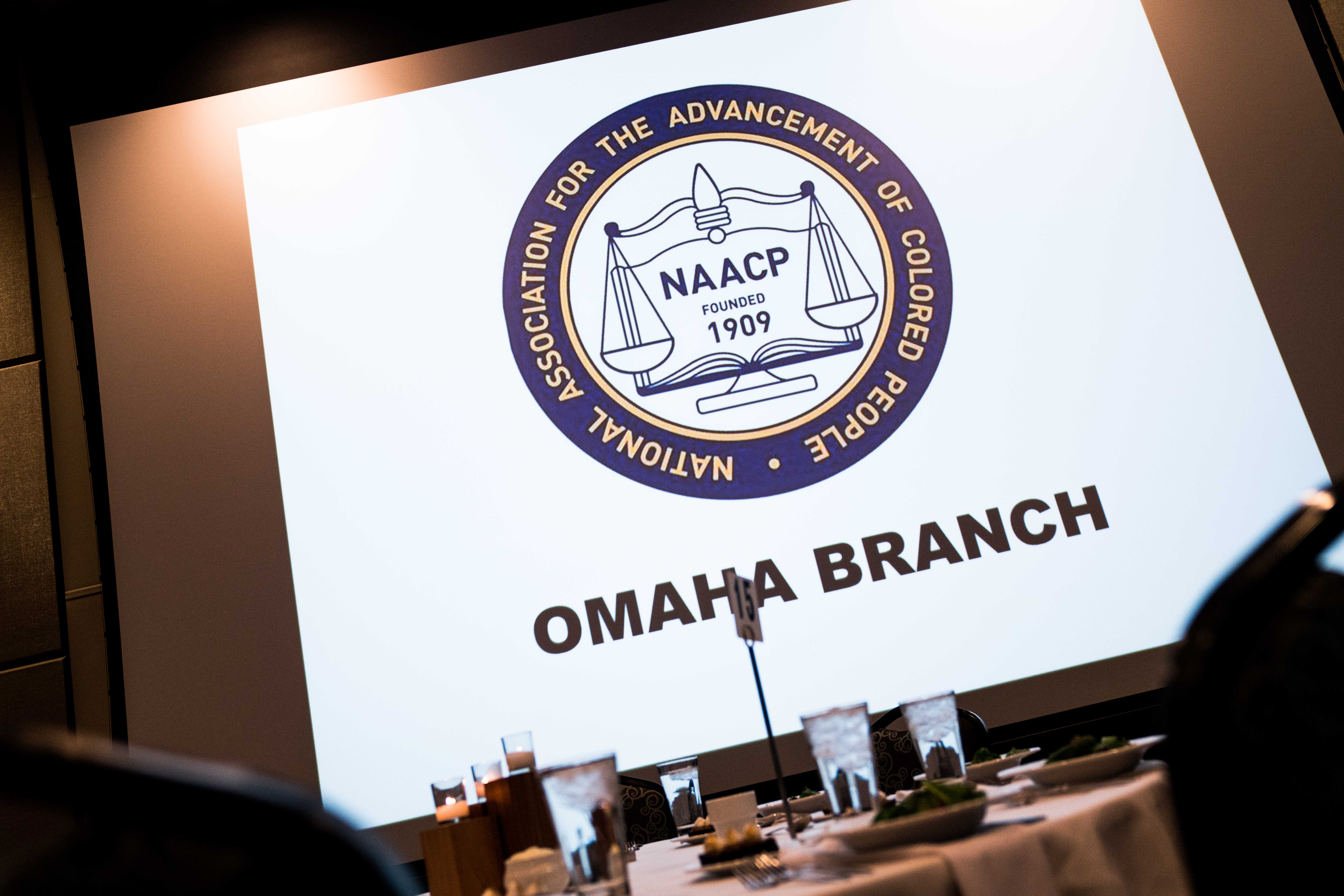 Get out the vote (GOTV) efforts, whether partisan party-driven or community-based, are a staple of American politics. In this messy mosaic of interests, attitudes and demographics, you may regard voting as solemn civic duty or why-bother-it’s-rigged hassle.

Whether viewed as endorsement, protest, act of hope or futile gesture, your vote is coveted, if not always counted, as with some provisional ballots following a change of residence. With a prior felony, exercising the right to vote may be denied. Never assume anything though because regulations vary by county or state.

Omaha and Nebraska are no different than the rest of the nation’s red-blue map when it comes to voting trends and takes.

“Every vote does matter,” he preaches. “It’s just convincing people of the power their votes can have.”

Issues make elections and candidates are the lightning rods that inspire or disturb the body politic. Primaries don’t entice the way general elections do, but it all comes down to who’s running for what offices. In the run-up to Nebraska’s May 15 mid-term primary, voter registration and education efforts have been in full-swing in areas of historically low voter turnout, such as predominantly black Ward 2 in North Omaha.

Politicos know 72nd Street is a boundary-line marker for voter turnout. On average, in general elections, about 75 percent of eligible West Omaha voters cast ballots compared to 45 percent in east Omaha. In Ward 2, the turnout reached 62 percent for the 2008 general election when Barack Obama won the White House. In the 2016 presidential election, that number dipped to 47 percent. Mid-term and municipal elections draw in the 30s and 20s. Given that, Carithers said, it’s only logical “who’s going to get attention” from elected officials, and thus, he emphasizes, it is in inner city voters best interests to have their say rather than stay away come election day.

Getting more urban core voter participation is a challenge. One reason is higher mobility rates, said Carithers. The more people change rental addresses, the harder it is reaching them with registration drives and with election date and polling place reminders.

Individuals without transportation or residing in shelters, half-way houses and nursing homes are tough to reach. Some may have been die-hard voters, but once out of the mainstream, it’s difficult recapturing them. 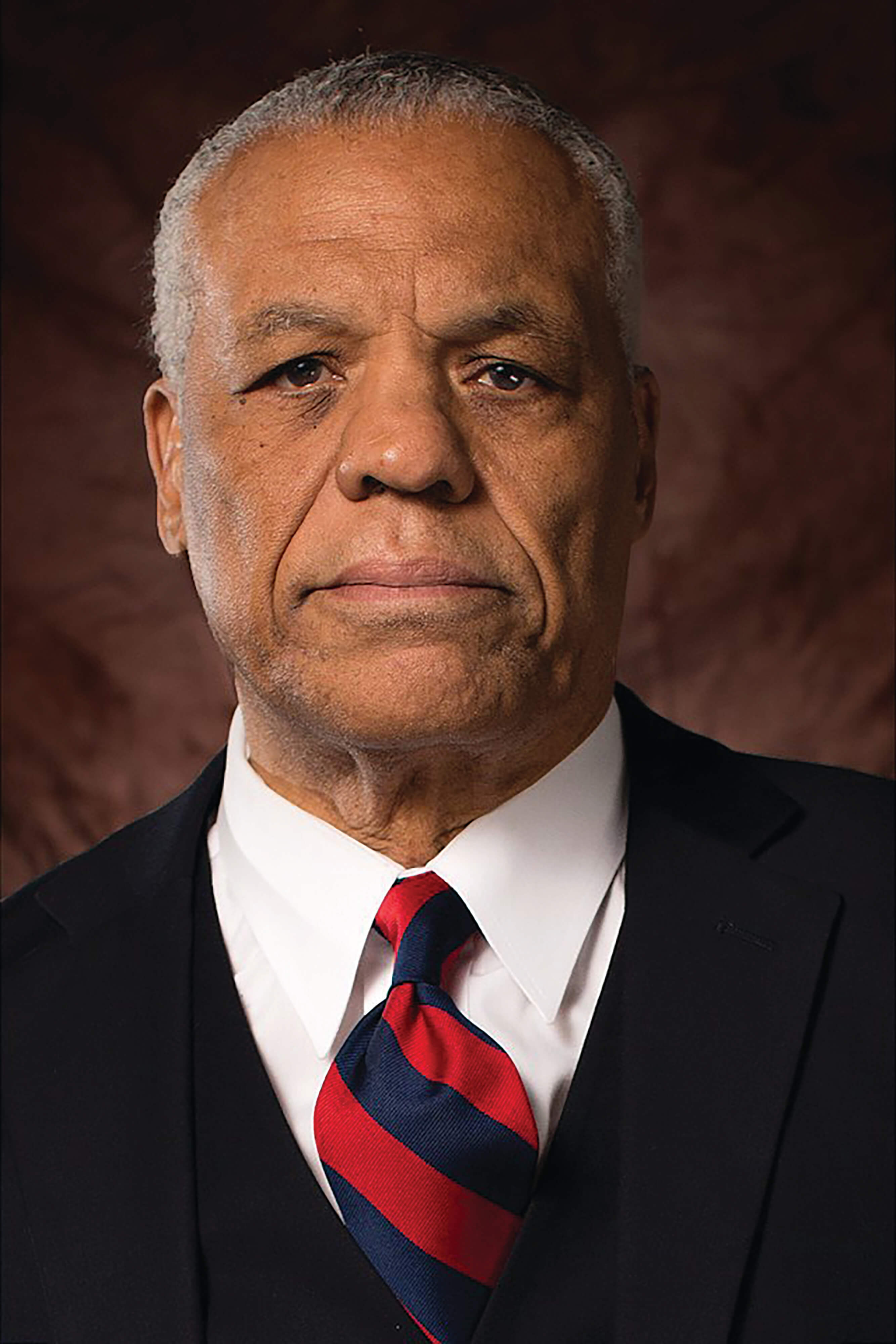 He liked what he saw.

“North Omaha in modern times has never had such a    grassroots effort to get our people activated,” he said.

Omaha NAACP president Vickie Young said the convention represented a coalition of community partners working together for a common cause.

“We all have the same goal. We want people to register. We want them to get to the polls. We want them to be educated on the issues and candidates. It was a great effort with great participation,” she said.

The event was organized by Voter Registration Education and Mobilization (VREM) – a collaborative of community, civic and social service organizations.”We’re trying to motivate attendees to go out and get people on their block to vote,” Love said. “We’re hoping the results of this will be record voting for a mid-term election.”

Love, a former national political campaign manager. vowed, “It will be built on. We have captured attention. We want to corral this energy. We’ve got to start getting our people involved. It is critical.”

He envisions Black lobbying efforts aimed at the state legislature growing out of the event.

Spurring participation, he said, is a desire to unseat the conservative Republican stranglehold.

“What I’m finding in the community is a renewed awareness of the need to vote. People are very dissatisfied in my community and so that’s activating people to get involved.”

“If you can get your neighbor or someone in your family turned on to participating, they have ripples because they talk about the issues or the candidates and they may be really proactive in getting folks to register.” 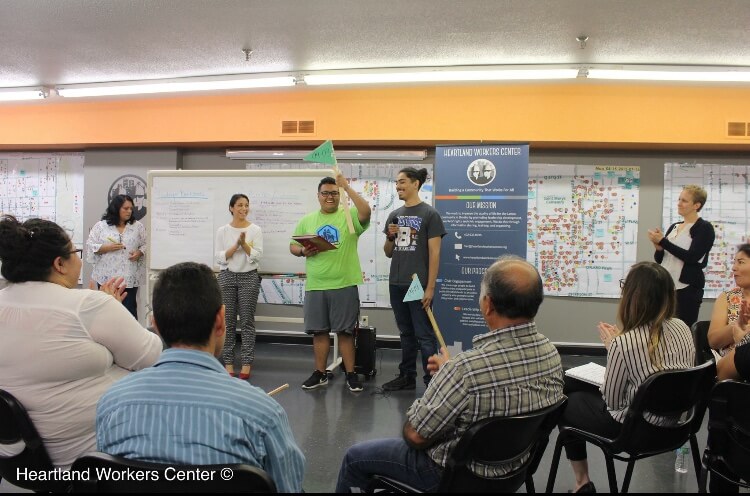 That strategy is behind some Heartland Workers Center (HWC) voter engagement efforts in South Omaha.

Young is counting on the ripple effect from the NAACP’s April 21 candidate forum to carryover on election day.

Frontline voter advocates are generally satisfied that the need to vote is being messaged and received.

“We can educate as much as we want, but we have to give people a reason to want to get out to vote,” Young said. “We have to make today’s issues that much more relevant. That’s what our branch is trying to do with initiatives such as the forum –  to bring candidates in on a more intimate level to let residents ask them the questions they really want to ask and to get those answers. We can be that much more intentional with our questioning in regard to how candidates will handle racism, discrimination, education and increase diversity. We can then hold them accountable to those issues that affect people of color.”

“Poverty has a dynamic effect on community engagement because people are trying to survive on a daily basis and things like this go to the bottom of the list,” said Love, who feels “there’s not enough information given to the rank and file.”

Perhaps the toughest barrier to overcome, he said, is that “people don’t see the difference and feel the difference even though there are in many cases testimonies of what difference is being made.”  “If you ask many people how their lives are different, they tell you, ‘I was poor and trying to make it before Obama, and I’m in the same place.'”

The disenfranchised are potentially at greater risk of voter suppression, but it appears Omaha’s been spared such tampering.

“I can’t think of any instances where anyone has done   anything to intimidate voters,” Carithers said. “We were proactive in anticipating there could be some people challenging voters in the 2016 election and there were absolutely no issues.” 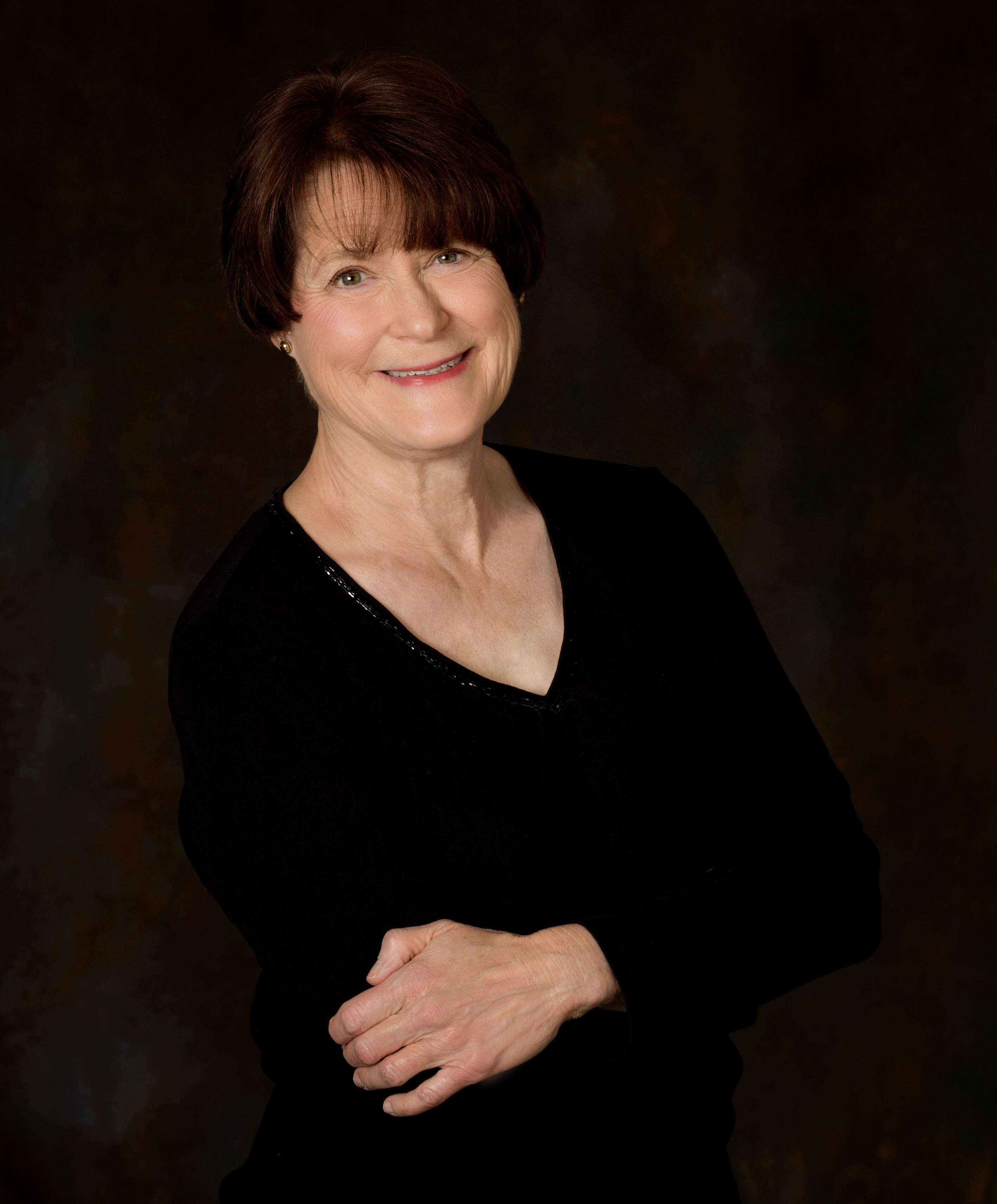 “There was a perception we were trying to take these polling places away,” Carithers said.

“Brian and I have gone out in the community to assure people we’re there to help them, not hurt them,” Carithers said. “We’ve made a concerted effort to make sure we’re in all the communities and giving information we think will be valuable to neighborhood groups. I think we do have a better relationship now than we did six years ago.”

“Chris and Brian have worked very hard at that. They’re very conscious of it,” Zieg said.

The nonpartisan commission intersects with many GOTV actors and advocates, including fraternities, sororities, church groups, the Empowerment Network, the Urban League of Nebraska, the NAACP and Black Votes Matter.

“We have a monthly meeting of what we call the GOTV stakeholders comprised of various groups interested in getting the vote out, ” Carithers said. “They run the political spectrum from right to left. We work with them to coordinate around what we can do to increase voter turnout so that people will participate.”

“I think we each have a role,” Young said.

The Urban League’s Black and Brown Legislative Day schools participants on the legislative process as well as pressing issues and provides opportunities to meet elected officials. In partnership with Civic Nebraska, it holds Know Your Voting Rights trainings. Its Advocacy Task Force and Young Professionals auxiliary group work to reinstate voting rights for people with felony convictions, ensuring voter ID legislation is not passed, advocating for automatic voting registration and streamlining the registration and updating processes.

Bid to advance mandatory voter ID have failed in the Nebraska Unicameral. Carithers said his office sees no reason for special voter IDs since election fraud is a non-issue. It could also prove cost-prohibitive in this tight budget climate. Same-day registration and updating could create long lines and delays.

“I never saw a need to do a tour until I realized we’re taking some things for granted about the kids’ knowledge. The purpose is to try to plant seeds. My goal is they’ll come back wanting to participate in things like voting.”

“There’s a lot of young people popping up. They’re all part of the future.”

Pedroza-Estrada is also buoyed by the dynamic young Latino leaders-engagers emerging in South Omaha. The immigration war is a catalyst for many.

Both she and Love want to help grow more social-civic-political volunteers and activists. It starts early.

“If we don’t show them the way or give them a reason why its important,” Love said, “then they wont vote and they wont become engaged in this process.”

Regardless of age, Vickie Young said, “We want to encourage more African-Americans to become involved in the political process, to run for office and get policies and bills passed that improve people’s lives.” 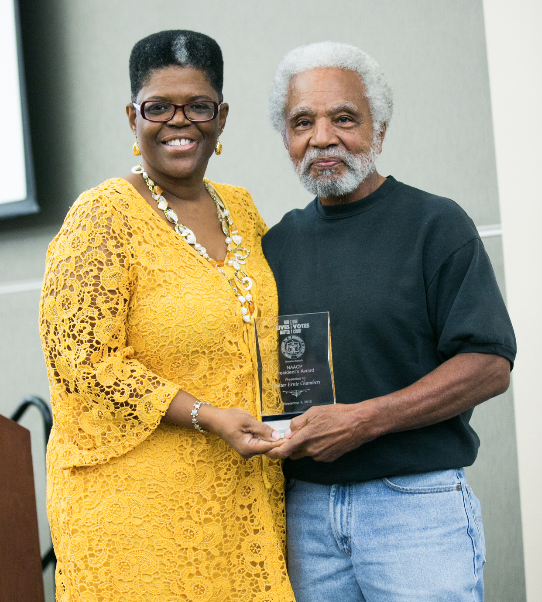 Love has found there’s no substitute for being “on the ground” rubbing shoulders with the constituency he seeks to energize. It’s why his office is on 24th and Lake and why he sends out door-to-door canvassers who mirror residents in that community.

The good fight is ongoing.

“It’s a full-time, year-round effort,” he said. “You have to build credibility – very important. You have to be a convener. You have to show you’ve invested in the community and what you’re telling people is right.”