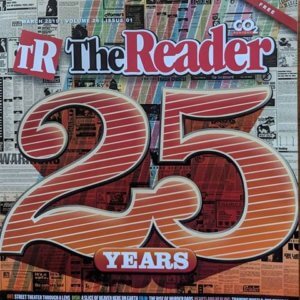 From my perch in the office loft on Harney Street up from the Old Market, I looked down at the pages of that week’s edition. They were carefully ranked across the first floor. Most of those with full-page ads were done, while half- and quarter-pagers awaited their assigned stories, columns or calendar items.

Sales reps hurried in with late images and ad copy. Local musicians dropped off CDs in hopes of a mention. Late stories were edited on the fly like a poetry slam.

It was a big “book” – 84 pages, and it featured writers and journalists who knew they were part of something new. The Reader, hatched a few years earlier, had grown as an alternative newsweekly with the community it served. For a time in the mid-1990s, I was its managing editor.

Publisher John Heaston said it wasn’t until The Reader was “thrown all over the city” that he realized an editorial vision was needed. “We saw there was a range of stories without a home in the daily newspaper and other media.”

The shift from publishing news “stuff” into something more solid was done in baby steps. “As we attracted more writing and reporting talent, our editorial growth accelerated,” Heaston said.

The arrival of two early contributors – Leo Biga and B.J. Huchtemann – helped speed the growth. “Leo found us, but we reached out to B.J.”

At long last, each page “hole” is filled. That week’s edition of The Reader is dispatched to one of several printers, depending on cost and press availability.

As editors, our priority was to establish an “immersive” style of journalism. We asked our writers and reviewers for “word paintings,” to provide details about the atmosphere and settings and people they covered.

We wanted to give our readers “detailed context.” Our stories, particularly the longer features, would be as colorful as the people we wrote for and about.

“You want the writers to see and hear and smell, and then to share that with our readers,” said Michael “Spike” Newgren, who later became managing editor and returned in 2018 to edit this magazine. “The Omaha World-Herald covered ‘what happened,’ but we covered ‘why it mattered.’ We wanted two reactions from readers – ‘Wow, I didn’t know that,’ and ‘Gee, that’s interesting.’”

This approach required us to trust our writers. After all, it was their personal experiences that enlightened our readers. One of the first to win complete trust was Leo Biga, who still writes for The Reader.

“This liberal editorial philosophy went hand in hand with the paper’s mission to offer a distinctly alternative voice,” Biga said. “Where the vast majority of mainstream media was viewed as up-tight, conservative and decidedly not hip or cool, The Reader was the antithesis of those things.”

The demand for thorough sensory records freed the more-experienced writers.

“I felt I could write in a freer, less constrained way than I could for other publications,” Biga said. “It wasn’t an ‘anything goes’ policy – more of a space where good writing was appreciated and expected.”

Free to the People

Once trucked back to Omaha, the resulting 25,000 copies needed to be widely distributed. That responsibility rested with Geoff Wertheim, sales rep, distribution manager and activist.

His route drivers slipped out of the dark through the back door. They waited for the truck and its bundles with books, naps and quiet conversation. They couldn’t focus on cell phones and other devices that were just arriving in Omaha.

Some were down on their luck and others just needed extra income. Wertheim, in his trademark woolen rainbow hat, recruited housewives, retirees, aspiring musicians and even family – Lori Wertheim, his sister, ran a route.

“You could make $20 to $30 an hour on a Reader route,” Geoff Wertheim said. “Sometimes they’d team up – one drove while the other lifted and ran. A few took just a one-hour route to earn $30. Maybe it was all they needed.”

This wasn’t a fleet of manicured delivery vans. That $30 an hour they earned also paid for a route driver’s gas and vehicle wear and tear.

“We had a few with newer vans, but a lot of them had old beaters,” he said. “They’d load up their trunks with bundles and take off with axles almost dragging on the street.”

Wertheim was proud of the hustle and efficiency of his route drivers.

“Professionalism is all about attitude, not appearance,” he said. “A few of them have died, a couple are the scourge of the earth. But some of them still work with me on different projects.”

And despite the passing of 25 years, he said little has changed in the distribution of print products.

“They still deliver the magazine’s 35,000 copies the same way – drivers hustling out of South Omaha on routes across the city.”

Our calendar of events was popular. It was comprehensive and sometimes, like that week, filled half of the space in the “book.” Accompanying it was commentary. Tim McNamara wrote about the theater. Michael Braunstein wrote about alternative health options. Both still do. B.J. Huchtemann is another columnist who stuck around. Her focus was and is on the local blues scene.

“I remember writers bringing their stories in on floppy discs. Many of our current readers won’t even know what those are,” said Huchtemann, who still trumpets the blues.

“We weren’t a tabloid; we did quality journalism.”

She said a music columnist plays a different editorial role.

“The niche I really fill is to let people know what’s going on musically and get them out to hear it live,” Huchtemann said. “I want them to put down their damn devices and get into their cars.”

She writes for The Reader after 25 years because of the editorial freedom she has.

“Once you prove yourself, you just go do it. I’m never assigned things that make me squirm.”

She said one editor pushed her to become more critical – to review rather than promote.

“I tried to editorialize a few times, but I’d rather focus on the acts people should go see,” she said. “It’s the difference between looking back or looking forward.”

She said to write bad reviews does make her squirm.

“I can’t ever forget there are humans on the other end. Even the worst bands have their fans and work really hard,” Huchtemann said. “I guess if I don’t mention you, maybe you have more work to do.”

Whenever you edit a story, you must believe to your core that you’ll make it better. Some victims call it editorial arrogance. I can accept that.

Journalists treat each phrase or image they write like it’s their child. Occasionally, they create art. Editors, on the other hand, should be clinical. Sometimes, you must rip and shred to produce a better story for the readers.

Editing is never an art, and no reader ever congratulated me for my work. But as a craft, it’s a harsh mistress, to paraphrase science fiction novelist Robert A. Heinlein.

The “immersive” writing style wasn’t easy to achieve. We were tough editors. Sometimes, a thousand-word story shrunk to 500 words, much to its writer’s dismay. Feelings were bruised.

Coaching writers became an important part of my job. We reviewed edited stories with their writers, sometimes before they were published. We explained why certain changes, additions and deletions were made. We tried to educate.

We also gathered like a tribe of wordsmiths. Our workshops ranged widely. We invited good writers and journalists to present their thoughts and detail their approaches. The editorial team discussed expectations and planned changes.

Such workshop speakers included such local luminaries as screenwriter and essayist Craig Pugh. We even sneaked in Jim Flanery, the legendary World-Herald reporter, who wasn’t keen for his bosses to know he consorted with that pesty newsweekly.

The better a writer became, the easier our jobs as editors became. Despite, or maybe because of, his proven skills, Leo Biga welcomed our coaching efforts.

“I felt I could be bolder in my use of language and narrative, and perhaps even experiment a little,” he said. “It invited and encouraged me to push myself as a writer and reporter.”

He said The Reader gave him the opportunity to focus on several topics he’s passionate about and wants to cover.

Biga said the opportunities The Reader gives him have diversified his writing style.

“I’m vaguely conscious I write in a certain style for The Reader that’s different for other publications,” Biga said. “It probably relates back to my view of it as a more open-minded space. That quality’s undoubtedly why it remains a must read for so many people.”

Biga said it is the publication’s consistency that resulted in him writing for The Reader for almost a quarter of a century.

“Its publisher, John Heaston, has been at the helm for almost my entire working relationship with The Reader,” he said. “And I’ve always had the opportunity to write across all sections.”

Biga said The Reader was and remains many things to many people, whether they’re longtime readers or not.

“For some, it’s a reliable source of arts and entertainment reviews and listings. For others, a champion of progressive causes,” he said. “As for me, it provides a vehicle to express my thoughts about things I’m passionate about.”

The Reader was the first Omaha newsweekly to be accepted for membership in the Association of Alternative Newsweeklies.

Since the mid-1990s, The Reader’s parent company, Pioneer Publishing, grew into six media channels — two in print, The Reader and El Perico, the Spanish-written newspaper, and four online. The Reader team also became a local leader in digital marketing services under the brand PioneerMedia.Me.

An estimated audience of more than 100,000 adults makes Pioneer the only non-traditional media company in Omaha’s top 10 by audience size, demonstrating proven growth since 1992.

“Yet as a man getting on in years,” Biga said, “I assert my right to be nostalgic for that wild and woolier time of the mid-1990s.”

I share his nostalgia for a time when we believed we could grow our culture and change our society. After all, it’s now a brave, new world.