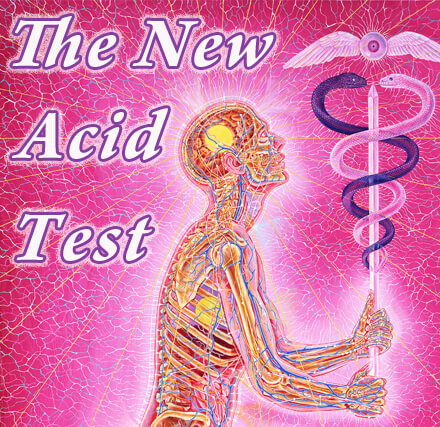 In the 1970’s, many creative types in the music business believed that a bowl of Wheat Chex, a line of coke and a shot of Jack Daniels was a well-balanced breakfast. Mind-altering chemicals have always been associated with art to some degree. On the business side of the ledger, recent news accounts note that Silicon Valley impresarios and unicorn wranglers are using micro-doses of LSD and other hallucinogens to spur creativity. The pendulum can swing too far in some cases but the considered application of chemical lubrication is also historically linked to spiritual awakening and an expanded awareness of God and self.

For millennia, cultures have used natural substances to delve into meta-natural awareness. Mushrooms, datura, ayahuasca, mescaline, salvia, LSD in the form of ergot — there are literally hundreds of naturally psychoactive plants that can induce a state of altered awareness. And the most powerful psychedelic, dimethyltryptamine (DMT) is also produced in the human pineal gland. Psychedelics, when used to enhance awareness of a higher consciousness or a Divine Being, become known as entheogens.

Alex Grey knows about the use of entheogens from long experience. The world-acclaimed artist is a self-proclaimed supporter of their use for opening the door to higher consciousness. Grey’s art is a combination of realistic anatomy and fantastical vision. His work is as recognizable as that of Dali, Rembrandt or any of the Masters.

His unique series of 21 life-sized paintings, the Sacred Mirrors, takes the viewer on a journey toward their own divine nature by examining, in detail, the body, mind, and spirit. The Sacred Mirrors, present the physical and subtle anatomy of an individual in the context of cosmic, biological and technological evolution. Begun in 1979, the series took a period of ten years to complete. It was during this period that he developed his depictions of the human body that “x-ray” the multiple layers of reality and reveal the interplay of anatomical and spiritual forces. Grey and his wife, artist Allyson Rymland Grey, maintain the Chapel of Sacred Mirrors in New York.

In a previous exclusive interview for Heartland Healing’s Healing Arts Directory, Grey offered comments on the use of those powerful entheogens.

On seeing the Inner Being:  Alex Grey: “I did a portrait of a skeleton when I was five. The skeleton probably was not right in front of me when I drew it. I’ve learned to paint what I see, to render, to draw, but the images have always come from my inner vision.”

Humanity’s impact on the environment:  Alex Grey: “It’s easy to question the survivability of our sometimes self-destructive species. Billions of years of evolution and divine intelligence have brought us to this point, and my faith comes from the miraculous capacity that humanity has to manifest its highest possibility.”

On healing: Alex Grey: “‘Life is suffering,’ is Buddha’s first Noble Truth. Suffering is living not in the present, living with desire. This is the second Noble Truth. Healing is liberation from suffering. We are beings that suffer from the dialectic between good and evil, spirit and matter, all polarities. Polarities are a form of struggle that our mind creates to understand the world. Transcending dualism through spiritual practice leads to the ultimate form of healing which is enlightenment. We are all dying and we are all healing. The cells of the body are constantly decaying and regenerating. White blood cells continually fight disease and the body tends to heal. Focusing on an ideal state can facilitate healing. Sacred iconography can be healing because an open-hearted viewer can align themselves with spiritual energy transmitted through the icon. By reflecting a divine template, enlightened masters embody the highest potential for health to which a human can aspire, liberation from duality and delusion, and compassion for all sentient beings.”

How to integrate physical and spiritual: Alex Grey: “Become One with the All. There are many ways that people have glimpsed the infinite multiverse including meditation, deprivation, near death experiences, and entheogens.”

Should entheogens be legal: Alex Grey: “I believe that entheogen use is a religious rights issue. The legal battle to permit the use of ayahuasca in sacred ceremony represents a model that I support. I also support the medical marijuana model in California and other places. All forms of drug policy reform that move toward cognitive liberty are positive.”

Your Endogenous Zones Some of the strongest drug-like substances are produced right within the human body. Beta-endorphins are 33 to 300 times more powerful than morphine and are produced in the brain. Melatonin can knock a person out for hours. GHB, synthetically called the “date rape” drug, is made in the body and has the same anesthetic effect. Epinephrine, made in the suprarenals, can keep you awake for hours. And that most powerful of hallucinogens, DMT, is released continually in small doses. DMT is also released in massive quantities at birth and at the time of death or near-death experiences. These endogenous drugs and others are naturally available to us within our own physiology. That begs the question: Do we need external drugs or are there ways to induce the release of our internal pharmacy? For those millennials trying to enhance their creativity with micro-dose LSD, there may be a better way. Endogenous DMT is 40 times more powerful and on top of that, free.