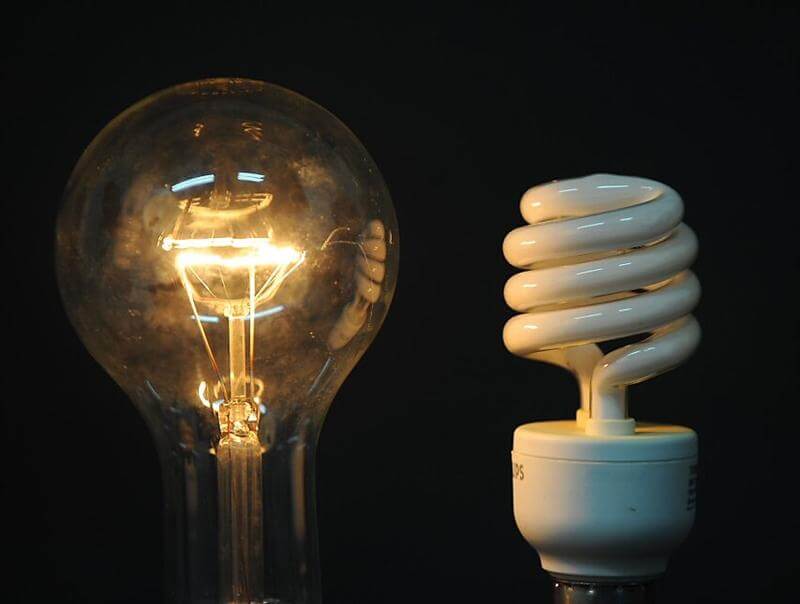 The Feds have backed off a little on the mandate that would have made the old-fashioned incandescent light bulb a thing of the past. In 2007, Congress passed a law that would have taken regular light bulbs out of the marketplace by now. But last year, Congress didn’t repeal the law. They did the next best thing: They defunded it. By removing funding to enforce the law that would have banned regular 100-watt bulbs, they effectively said the law exists but it won’t be enforced.

Buddy, can I get a light? Compact fluorescent lights or CFLs, were going to be the answer to energy independence. Federal law stipulated that all light bulbs must use 30 percent less energy and that means the light bulb as Thomas Edison invented it, the incandescent variety that we have known and used for 150 years, would be a thing of the past. Oh, we weren’t being forced to use CFLs. They just happen to be the most affordable (though still far more expensive than incandescents,) and the most available. But if we switched to CFLs, the reality is that an invention that stood the test of time, reliability and safety would be replaced by untested and questionable technology.

The Dark Side. Americans are energy hogs and cutting down on energy use is a great idea. CFLs just aren’t the best way to do that. CFLs sound like a good idea since they use less electricity to produce light. But that’s only part of the story.

Critics point out that CFLs take more energy to produce than does the simple incandescent. Each CFL has a tiny computer chip inside to make it work. It’s far more complex. Plus, the vast majority of CFLs must be shipped from — you guessed it — China. The energy inputs to get a CFL to market put it in the red before it even hits the store shelf.

Here’s what else critics say. CFLs contain toxic mercury. They give off dim, unusual light. They don’t last as long as claimed. You can’t fit them into many sockets. They give off toxic radiation. The CFL industry admits that bulb life can be much shorter than claimed.

If you break it, don’t suck it. Break an old-fashioned incandescent and you simply sweep it up. Break a CFL and your entire day (and health) could be compromised. How toxic are these bulbs? Cleanup procedures read like a HazMat guide for anthrax spores.

The EPA tells us, first, no matter the season or weather, immediately open the windows to ventilate, turn off any central air conditioning or heating fan and leave the room for at least 15 minutes so the mercury vapor dissipates to an acceptable level.

Next, they say, do not use a vacuum cleaner. Wear safety goggles and rubber gloves. Scrape up the broken pieces with stiff cardboard or paper. Use duct tape or sticky tape to trap the small pieces. Blot up the finer pieces of glass and powder with damp cloths.

Finally, place all of the debris, including the clean up materials, in a glass jar with a tight lid and deliver to your local hazardous waste disposal location. In addition, it is suggested that if the broken bulb contaminates a carpeted surface, discard the rug or carpet. Also, they say it may be wise to put down a disposable drop cloth when changing CFL bulbs.

Is that the kind of item you want to have in your kid’s bedroom lamp?

Dirty electricity. Any electric device produces some kind of electromagnetic field (EMF). Depending on the characteristics of that field, some EMFs are worse than others. EMF pollution is a serious threat with dangerous health consequences. CFLs are nasty when it comes to EMF pollution. One function of CFLs that is unavoidable can lead to migraines and seizures for epileptics.

To make smooth-appearing light, a CFL has to be blasted internally with energy, pulsing over and over. In some CFLs it’s about 32,000 times a second and in some cases as often as 100,000 times per second. In reality, the bulb is flashing on and off so fast that the eye barely detects it. But it does. This rapidly flashing light source is believed to trigger migraines and cause the preliminary symptoms of a seizure in epileptics.

Magda Havas, Ph.D. is a leading researcher in the field of EMF. Her research has found links between CFLs, EMF and a variety of symptoms. Flickering fluorescents can trigger seizures and migraines in sensitive people and are also linked to dizziness, lightheadedness, heart palpitations, digestive disorders, skin rashes, complications for sufferers of multiple sclerosis. CFLs affect those who suffer from lupus and other light sensitivity issues. One little-known effect is that when we plug a CFL in any place in our home, it causes the entire wiring of the home to put out dirty EMF, sort of like a sewer backing up.

If we want to save energy, why not legislate that office buildings turn off their lights at night?

Heartland Healing is a New Age polemic describing alternatives to conventional methods of healing the body, mind and planet. It is provided as information and entertainment, certainly not medical advice. It is not an endorsement of any particular therapy, either by the writer or The Reader. Visit HeartlandHealing.com for past articles.