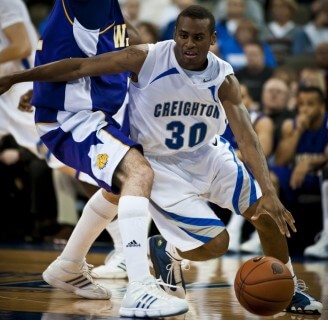 If there was one thing the Creighton basketball team was consistent at all season it was being inconsistent. Momentum came and went. Close losses dot a 2010-11 schedule that saw them finish 18-13 overall and 10-8 in the league. The Missouri Valley Conference title came down to the last game of the regular season with Missouri State capturing its first-ever league championship by taking down Wichita State. The Bears and Shockers were a step ahead of the pack all season and will head to St. Louis for the conference tournament as the favorites. Indiana State was the league’s surprise squad, finishing third. The Valley slipped a bit this season with a sub-par record against non-conference competition and a lack of marquee wins. The league is expected to receive only one invitation to the Big Dance, the automatic bid that goes to the winner of the conference tournament. The bad news for the Bears is that despite their first-place finish and 23-7 record, they could still be on the outside looking in when the NCAA hands out bids. The good news for the Bluejays and the rest of the pack is that they all start with a clean slate come Friday. Win and you’re in. Creighton’s inconsistency wasn’t unexpected. Their roster is loaded with youth while the experienced players had to adjust to a new system brought in by a new coaching staff. Picked fourth in the preseason conference poll, the Jays did in fact finish tied for fourth with Northern Iowa after Creighton tamed the Panthers last Saturday in the final regular season game at the Qwest Center, 63-55. For the second consecutive season Creighton gets a rematch in the opening round of the tournament against the team it beat to end the season. Last year Bradley knocked the Jays out early after falling in the season finale. The Panthers will be hungry for revenge, and also hope to rekindle some of their magic from last season’s Valley tournament title and subsequent run to the Sweet 16 in the NCAA tournament. “Its just a matter of not outthinking yourself,” says Creighton head coach Greg McDermott when assessing the rematch. “I’m not sure if there is any advantage, but it should be a little easier to prepare. I won’t have to stay up all night watching film on Northern Iowa … I’ve already done that.” One film that coach McDermott is unlikely to tire of watching is the highlight reel his son put together this season. Freshman forward Doug McDermott has exceeded even the most rosy of expectations after beginning fall practice as a candidate to red shirt. He finishes his freshman campaign as a solid candidate for first-team all-conference honors. McDermott led the Jays in scoring and rebounding, averaging 14.3 points and 7.6 boards per contest, good for fourth and second best in the league, respectively. His 443 points on the season are the most by a freshman in Creighton history, topping Rodney Buford’s total of 421 from the 1994-95 season. McDermott was named conference newcomer of the week a record five times. His consistency for a freshman was as uncanny as his ability to finish shots around the rim. Creighton fans have every reason to feel a bit giddy when they think about having that guy on their side for the next three years. Junior point guard Antoine Young was equally valuable. He led the Valley in assists with 4.5 a game as well as in assist-to-turnover ratio while logging over 36 minutes a game; his 13.6 points-per-game scoring average was seventh best in the conference. But his true value to the team can’t be measured in statistics. Young is the team’s floor general, quiet leader and barometer. When he’s good the Jays are good; when he struggles, so do the Jays. If they make some noise in St. Louis, it will be because Young’s “A-game” did the talking. The MVC Tournament will be the last chance for senior Center Kenny Lawson Jr. to prove that his preseason conference player of the year selection wasn’t a total fluke. Lawson’s lack of production and the emergence of new big man Gregory Echenique, a sophomore transfer from Rutgers, cost him the starting job he held for three years. Fellow seniors Kaleb Korver, Darryl Ashford and Wayne Runnels have all experienced their share of highs and lows in their careers. None has quite lived up to expectations, but like Lawson, they have one final chance to leave their mark on a Creighton program that hasn’t reached the NCAA Tournament or captured the Arch Madness title since 2007. The action starts in St. Louis with the lower-seeded games Thursday night. Creighton and Northern Iowa’s match-up is set to tip off at 2:30 p.m. Friday. All games will be played at the Scottrade Center for the 17th straight season with the action televised by Fox Sports Midwest. The championship game will be shown nationally by CBS and is set for 1 p.m. Sunday.