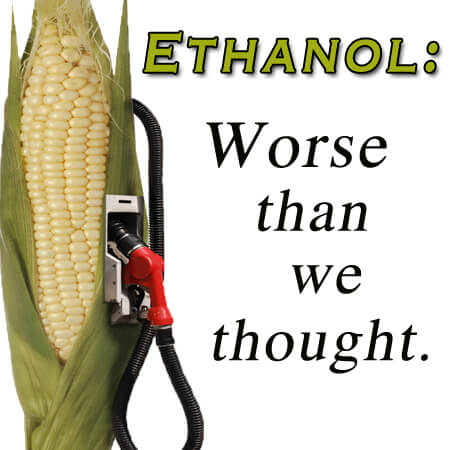 Farmers may be the hardest working people in America. Most rise before dawn, crack ice on water troughs for the animals, get out to till the soil or mind their crops. Then go to bed late with dirt under the fingernails. Even those modern corn farmers in GPS-guided, climate-controlled, satellite radio, power steering, John Deere’s work hard. And all farmers now have a full-time job just addressing the paperwork needed to keep a farm running.

Be not mistaken about a farmer’s work ethic. But we must, sooner or later, realize farmers are trapped, along with us, in a diabolical agriculture system that typifies all that is wrong with our world economy and political web. We’re talking corn and specifically ethanol. The American people have been fed a crock of lies about the corn system and ethanol since their inception and the husks are beginning to shed, revealing the truth about those rotten kernels beneath. And our first order of business should be to find a way to free the American farmer from the servitude of Big Ag, the GMO Giants and corporate interests.

Deception revealed. An ad on the radio the other day promoted a new GMO corn seed from Syngenta, one of the Big Five GMO Evildoers. This new, patented seed, (yes, a plant seed can now be patented,) produces corn used only for ethanol, not as food. In fact, the GMO seed, called Enogen, creates disaster if even one kernel finds its way into 10,000 regular kernels of corn in a plant that processes corn chips, for example. It’s a GMO seed for ethanol only. You can’t justify GMO technology by that deceptive “We need it to feed the planet” lie anymore when you’re using GMOs to grow corn used only for ethanol.

Ethanol industry built on deception. Monsanto, Syngenta, and others — the GMO Giants — told us we need GMOs to feed the world. Lie. GMOs have proven to produce less yield than the old-fashioned corn strains. Plus, the corn they produce doesn’t go to human food anyway but to ethanol plants and to animals that get sick if they eat corn. They told us GMOs would reduce the use of pesticides. Wrong. Pesticide use increased hugely. They told us GMOs would be carefully controlled. Wrong. Rogue strains of GMO corn, wheat. alfalfa and soy have been found miles away from their fields. They told us ethanol was environmentally friendly. False. Ethanol provides lower mileage, damages engines, produces more of several contaminants and takes huge amounts of water and oil to produce. Add to that the fact that growing mono-crop corn depletes soil, increases inputs, causes erosion and wastes resources, there is nothing environmentally sound about ethanol. They told us GMO corn was safe. Doubt it. Studies are finding that GMO corn damages health in myriad ways.

And since around 80 percent of all GMO corn goes to ethanol or animal feed, we don’t get to eat it at all. Which is lucky, because the small percentage of corn left goes to the kind of stuff we’re finding out kills us. Or did you think high fructose corn syrup and Cheetos are health food?

Propped up by your tax dollars and political mandates. Get this: no farmer would be growing GMO corn or sending it to ethanol plants if it were not for your dollars involuntarily subsidizing it. Through massive lobbying efforts, the ethanol/corn industry has influenced politicians to pass laws and regulations that require ethanol be blended into vehicle fuel. You got it. Government rules passed by Congress created a market for a product that would fail miserably in a free economy. Ethanol is inefficient fuel and people only buy it in gasoline because they have to. The Renewable Fuel Standard guarantees that when you drive your car, you get to send money to the GMO and ethanol industry.

Corn Wars. So now, Syngenta has government approval to sell a GMO corn seed with an artificially inserted bacteria gene that produces an enzyme making the corn easier for ethanol plants to process. They say it’s safe. But Enogen kernels mixed with corn grown for food would break down its starches, which would lead to crumbly corn chips and soggy cereals and corn bread. Even the giant food processors like ConAgra (heard of them, right?) and General Mills lobbied against approval of Enogen.

Enogen was approved for commercial production in 2011 by the US Department of Agriculture despite opposition from the North American Millers Association (NAMA), which represents 43 major food companies including General Mills and ConAgra.

So now you have the GMO guys who make high fructose corn syrup and junk food for human consumption fighting the guys who use GMO corn to make a disastrous fuel.

The Answer. It’s not ethanol from switchgrass or any other biomass. None will create the answer. We need to get off the internal combustion engine merry-go-round entirely. After 150 years or so, time to move on from oil, biofuels and burning the planet to stay warm in winter or moving around the highways. A recent mainstream media Op/Ed said the ethanol corporations in Nebraska are important because the sector maintains 1300 jobs. Wrong. It’s not the ethanol corporations that are important. It’s those 1300 people who need those jobs. Government, with your vote, needs to get out of the business of helping the ethanol/GMO/corn industry and get on with promoting jobs for those 1300 fellow Nebraskans. Let’s move them into the growing field of truly safe energy production, with solar, wind and hydro. There’s plenty of work to do. Create jobs for them repairing the damage to the planet that monoculture corn, Big Ag and dirty fuel has wrought. Only when we do that will we make it a healthier planet.