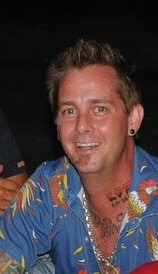 Imagine deliberately shoving a long, silver needle through a nose, septum or, of all places, a throat. Then imagine that’s your job. Welcome to Dave Brown’s world.

As a professional piercer at Big Brain in Omaha, Brown’s main mission each day is to pierce as many, um, body parts as possible. But more than that, Brown is intent on building long-lasting relationships with his clients, something that clearly separates him from the herd.

The piercing industry has exploded in recent times. People aren’t just piercing their ears anymore. Furthermore, they are finding other ways to adorn their bodies.

“The microdermals, which are those diamond implants in the skin, are pretty popular. That’s a good chunk of our business lately,” Brown says. “Then there are the standards that have always been popular that will continue to be popular; the nose and the lip. Those two piercings probably are 60 percent of what we do. I think the right person can pull anything off, but some piercings don’t belong on some people. ”

Brown is extremely busy these days. He ended up at Big Brain thanks in part to his long-term friendship with J.P. “Smitty” Smith, the owner. He does between 350-400 services a week. He sees every type of person walk through the door wanting something pierced. He jokes that even women from Mutual of Omaha want a quick nose piercing on their lunch break. As piercings and tattoos merge more and more into the mainstream, Brown surprisingly keeps up. They have, after all, always been oddly enticing to even the “squarest” of people.

“It’s about making an individual statement for yourself, but at the same time, it’s about becoming part of a group. There’s a lot of popularity from the TV shows and magazines that’s brought it more into the mainstream. Once that stuff started a few years ago, a lot of people realized it’s not just bikers, sailors and whores getting this stuff,” he says. “It used to be that you would get a piercing or tattoo to be the rebel or an outcast, but not anymore. There are a lot of demographic studies out there and in 20 years, the majority will have tattoos and piercings. When we’re our parents’ age, we will have more tattoos and piercings than people who don’t.”

As crazy as that may sound, it’s not too terribly shocking and neither is making piercing or tattooing a career choice. While Brown has only been piercing professionally for three years, he’s definitely one of the best. Personable and well-versed in his product, Brown has the little extra something to make his business thrive.

“I think piercing is definitely a learnable skill, but the one thing that has to come naturally is your bedside manner and the way that you treat your clients,” he says.  “If you don’t have some level of trust and friendship, you have nothing. You have to put people at ease. I think that separates the great piercer from a guy at the shop just looking to get 5 piercings a day.”

“I am absolutely honest with them,” he continues. “I think that’s one of the things that separate myself and Big Brain is the fact that we have the luxury to pick and choose to build that rapport with our clients.”