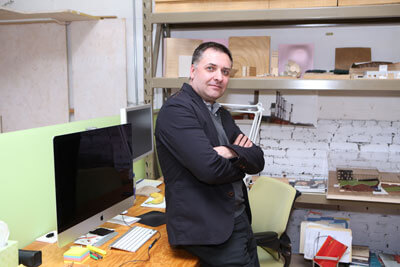 What drew you to your particular field?

It really goes back to when I was really young. I used to make things, I used to draw quite a lot; it was a big hobby. And I found, if I think back to the drawings I made as a kid, they were really precise drawings. So I think the sort of technical precision connected with the sort of freedom of an art discipline really drew me to architecture as opposed to maybe other design disciplines.

But I went to college as an art student at a liberal arts school, I went to Harvard and majored in essentially their version of visual arts. I took some of their architecture classes but I was really focusing somewhat broadly at that point, a lot of theater design and different artwork. And then I went to grad school for architecture.

Beyond the enjoyment of making things and drawing and designing, I think that architecture spans a huge range of social and culture issues and brings together everything from philosophy through very pragmatic concerns like keeping the rain out of the building. One of the things that I really think is fascinating about architectures is that in the very same day I can be talking about sort of a philosophical approach to some cultural issue and then I can be working on the detail about how to put together a roof on a house and deal with all of these practical things. I really like the connection between them.

One of the classes I teach at UNL is called Details and it’s really about how philosophy and critical thinking come together with practical issues in making things, and it’s about decision making. I think I just like the fact that architecture touches on different things.

What has changed most over the years in your particular field?

Probably the most fundamental change in last 20 years or since I went to school until now is the impact of digital technology on architecture. The way we work is completely different from the way we worked when I was in school. I was a brilliant hand-draft person and I thought I had a job for life, and things just changed so radically. At first the technology simply replaced an older technology, architectural production, the way we draw things, we just used a different kind of tool to draw. But now it’s actually changed in a much more fundamental way: the way we think about buildings, the way buildings are made, the way they’re managed in terms of facilities management has become very digital, and it’s opened up a tremendous amount of possibilities for architects to be able to have a much more greater sense of control over their projects than they may have had in most of the 20th century.

It’s continuing to change the way we design, the way we interact with the construction industry is changing and it will continue to do so.

Where do you turn for design inspiration?

I look at a lot of different things; I would say it may be risky for an architect to have a narrow field of interest. I look to contemporary art quite a lot and conceptual art—not in the way a lot of people would think, looking at art to look at different ways of making form—but more about how artists approach the world; the way artists innovate is much more broad and maybe fundamental than the way designers often innovate. So I think that contemporary art is always an important resource for me, more for ideas, though, than form.

I’m also very interested in landscape and of course the history of architecture and the discipline of architecture. I think architects are always looking at other architecture; it’s hard not to do that…My wife calls me the Terminator because when I walk into a building, I scan around and I instantly notice everything.

I still can enjoy architecture, and I think that’s important. I can still take pleasure in visiting a great building or a great public space, but I can also find things to critique and things that maybe didn’t work the way they were intended, and think about it maybe more of a complex way. But it doesn’t mean that I simply can’t enjoy things. If I lose that ability to enjoy architecture, I don’t think I’d want to do it anymore

Why do aesthetic qualities matter as much as practical qualities in design?

But I also believe that the aesthetic and the pragmatic are really connected, it’s not something that I try to address with students, but you’re dealing with aesthetics in the very beginning but you’re also dealing with practical qualities from the very beginning—it’s not that you solve the practical problems first and then make it look good. That’s a really outmoded understanding of design.

What are the benefits of good design?

I think good design improves lives and has benefits for society as a whole. Architects are really involved in not just representing or symbolizing for the desires of the public but actually making spaces that work for the public. Whether we’re talking about a public space or a work space or a residence, architecture and design in general is really about improving lives…I think that’s why architects tend to be optimists, because we’re always thinking we can make things better.

What are the primary influences on design in Omaha?

Omaha has a lot of influences from the outside. I’ve been here for about 15 years and I’ve found that the Midwest tends to be broad as a region and we tend to look at a lot of different things.

What are some classic examples of good design locally?

The Old Market is a good example of a very pragmatic approach to design. Those buildings were designed as warehouses, they weren’t designed for anything else but solving a particular challenge of moving goods from one place to another and storing them temporarily. And the repurposing of that into what the Old Market is now, in a lot of cases it’s simply an updating of the pragmatism of the original building.

The specific examples kind of deviate from that, they tend to be the monument buildings like the state capitol, NBC bank that’s now Wells Fargo in Lincoln, the Sheldon Museum in Lincoln; these are really great buildings that are nationally and internationally known. In Omaha, the Joslyn and the addition to the Joslyn are important projects.

If Omaha had a design aesthetic, how would you define it?

I think the sort of a pragmatism of the Midwestern farmer, I find very interesting as an influence on architecture and design. Nebraska and Omaha tend to be very pragmatic places; you don’t find a lot of speculation and crazy sort of experimentation like you might in Los Angeles. You find things are really rooted in a kind of pragmatism of solving the problem.

Where do you see Omaha’s design aesthetic going?

I hope it evolves to a point where it’s not just about an aesthetic but thinking about how we want to live in the city. I think we need more density, the city is growing widely and it’s been that way for a long time. The Old Market is really a vibrant community but it needs to densify. I think we need new types of space for people to consider. Right now there’s two options for housing in Omaha: there’s west Omaha houses with backyards and front yards and then there’s small apartments in the Old Market. I think we need alternative types of housing that’s somehow between those two. I think there are other cities that are doing this; Kansas City has some interesting projects. I think we also need renewed understanding of the value of public space and interface between private space and public space; that’s something that has not been considered very well here. I don’t think it’s really a question of aesthetics, it’s a question of design and urbanism coming together to create new ideas for people.

How do the different design disciplines interact?

Speaking about the college, we’re creating an environment that is interdisciplinary and multidisciplinary at the same time. We have architecture, interior design, landscape architecture, planning, and we’re going to start an industrial design program, and all those students take the same classes in the first year. Those classes are really about creative problem solving and teamwork. We’re teaching them to interact and collaborate from a very early age and then later in curriculum bringing them back together to actually work together. Some of the problems of cities really can’t be solved by individual disciplines, like an architect can’t solve an urban problem and a landscape architect can’t solve it on their own, but they get together and they can really come up with innovative solutions to some of the issues that we have.

What do you wish non-designers knew about design?

I would hope that the general public would come to understand how design already impacts them on an everyday or every-minute basis. Every manmade object that you touch is designed by somebody–that doesn’t mean they’re all good but design decisions are being made every day that impact people and I think they should think more about that impact and interact with that production at some point and be intelligent about making choices.