Home » Specials » Devil in the Detail 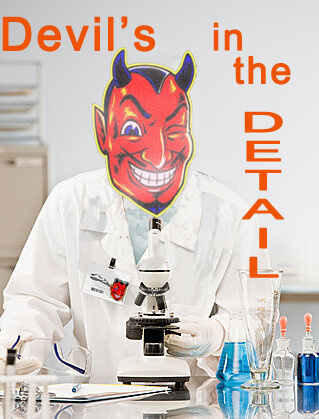 Do you suffer from “Fact Fatigue”? Are you confused and exhausted after turning on the television, opening up Google alerts or reading the newspaper (remember those?) under the constant barrage of factoids about the latest thing that makes you fat, keeps you skinny, heals your heart, hurts your heart, kills you, saves you, saves the planet, kills the planet and on and on? Are you tired of reading and hearing a new “fact” that scientists or researchers have figured out? Have you realized by now the Byzantine byproduct of scientific research is a mountain of questionable findings that are overwhelming, contradictory and of very little help in living a happy or healthy life?

Is sunshine a source of healthy vitamin D or a bet for skin cancer? Too much salt or not enough? Red wine’s good then it’s bad. Potatoes a great source of vitamins or toxic starch? Whole wheat good or wholly bad? Salmon good? Salmon bad? Treatment for early prostate cancer good or it’s a waste of time. Fruit juice healthy or just sugary water. Milk does a body good (no) or causes bone loss (yes). Coffee is a carcinogen one day, then the next it stops heart disease and prevents cancer. We are deluged with data.

Sifting through what science preaches one day, refutes the next and rationalizes the following week is like swinging from tree to tree in the rainforest in search of a beach. There’s no safe landing in sight.

The Age of Enlightenment has left us in the dark. There was a period of human history actually called the “Age of Enlightenment” and it wasn’t the 1960s. It was more like the 1760s. It was a time when the Industrial Age was gaining its stride, machines were getting big, energy sources becoming sophisticated, theories of healthful practices were gaining traction and the intellect of man was taking center stage. It’s no coincidence that the invention of the printing press and the era of mass media was there to report all this. The medium may have been the progenitor of the message.

During this period, a significant shift took place away from the belief system of religions, mainly Catholicism, and toward the belief system of “science.” The egocentric proclivity of man to claim understanding of how things work became commonplace. Oh, the wonders of science! The intellect of man stood far and above the rest of the planet and even on a par with God, or so it would seem. Because we were beneficiaries of the technological advances in observational equipment and bending natural processes to our will, we were becoming “enlightened.”

The Shade Tree The cautionary proverb uttered in the Garden of Eden was, “Do whatever you want here. Eat what you will. But avoid the Tree of Knowledge.” This Biblical phrase seems to confuse many religious scholars and some who would question why God would offer such admonishment. But it’s not confusing when you look at what mankind has done with a little knowledge. Shuffling on toward 300 years into this Age of Enlightenment, we remain defiant enough to still dine from the forbidden fruit, the Tree of Knowledge.

As technology increased our ability to tear things apart and view interactions on a chemical and subatomic level, we began to believe we could “figure things out.” We watched sailors avoid scurvy when they ate limes. So we had to tear into limes and eventually isolate a molecule that seemed to do the trick and we called it Vitamin C and synthesized it and pressed it into tablets.

We studied plant physiology and soil chemistry and found that plants require a minimum of three elements to stay alive: nitrogen, phosphorus and potassium. So we made fertilizers out of only those.

With the body, we learned to identify aberrant cells and when they mass in a tumor, we call them “cancer” and cut them out. Why a surprise if cancer appears somewhere else in the body?

We have quantized and reduced the human experience to a subset of identifiable functions and capacities and believe we can control the whole by keeping track of the isolated factors. It’s like thinking we can control the sea by scooping buckets of water at the beach. Examples of reductionist science are endless.

Religion does not equal spirituality. Only decades into the Age of Enlightenment, science sought to usurp religion’s place as primary belief system. While religious mythology and misinterpreted superstition are a good thing to lose, the respect for spirituality suffered. We threw out the baby with the bathwater and 300 years down the road reductionist science has nearly succeeded in turning us from the application of spirituality in daily activity. Science became the prime directive, the new religion.

Science in general draws our attention from within and spirit to without and the physical universe. Looking to the physical for tools is fine. If we are looking for meaning or reason, we must look within and let ourselves be told those answers from a higher source.

Science asks only, “Is it possible?” and if the answer is “Yes,” then does it. Spirit should tell us, “Is it appropriate?” We have deified the intellect and minimalized the intuitive, our connection to spirit.

Only now are we beginning to see that extracting Vitamin C from its natural source leaves us bereft of the other benefits nature placed there to act in concert. We are at least aware that growing food crops with marginalized minerals as synthetic fertilizer leaves our food devoid of the micronutrients that a truly healthy topsoil would provide. And we are just beginning to understand that human health is also a holistic event and treating the whole body is the way to go.

Collateral Damage. Reductionist science is a self-perpetuating cycle. Researchers seek to justify grant money or corporate financing. We turn to Google and Facebook for guidance? What happened to looking within? Even in a downturn economy, look at the sectors that still prosper and grow: information technology and healthcare as the false gardeners of the Tree of Knowledge and prey on the human fear of losing health and dying. They offer falsehoods draped in fact to lure. Rather than suffer confusion, learn to look within for guidance.